Concerns over violent extremism (VE) are increasingly entering discussion about global development. In recent years, a number of organizations have been attempting to use and promote education to reduce violent extremism (VE). This blog post discusses relevant studies to determine what we know and what we don’t know about the links between education and the prevention of VE that underlie such strategies. 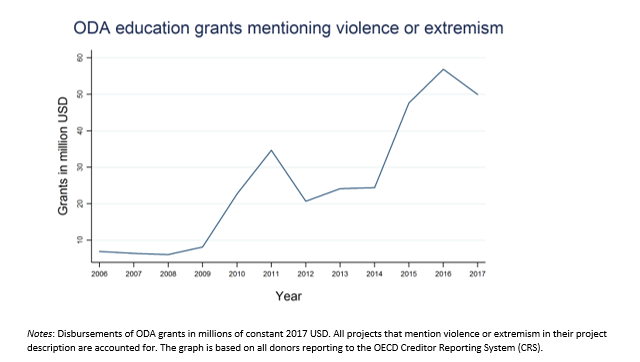 Originally adopted in 2006, the 2018 sixth review of the UN’s Global Counter-Terrorism Strategy reiterated the importance of education in the prevention of VE (PVE) (noted in SDG 16) and as a measure to address the spread of terrorism. In 2016, OECD’s Development Assistance Committee (DAC) made similar steps by accepting activities for PVE as eligible for official development assistance. This idea has also been supported by the European Commission, who in 2017 published extensive guidelines on PVE in development with a prominent focus on education. Below you can see how ODA grants on education related to violence or extremism have increased substantially over time.

However, the base of rigorous evidence on which these strategies are implemented is rather thin, and the idea of using education as an avenue to reduce VE is intensely debated. First, it is particularly hard to rigorously study the impact of such programs. It is difficult to collect reliable data, as many of the associated activities are illegal. Furthermore, VE is a political concept rather than a scientific one—and thus no agreed definition exists. Second, some forms of VE, such as international terrorism, are extremely rare and hard to study with field experiments for example. Third, the contexts in which VE appears are also extremely diverse, so that the reasons for individuals to engage in violence are very diverse as well. And finally, while some policymakers strongly favour education as a peaceful way to reduce VE, others see the application of a “security logic” to the education sector as problematic, and worry that education may become a means to an end, rather than an end itself.

Nonetheless, there are a small number of studies that rigorously examine the direct links between education and VE. Complementing these studies is a large body of research that looks at what one can call “intermediate outcomes,” examining the indirect links between education and VE. These studies investigate, for example, education’s influence on labour market opportunities for individuals, or its influence on preferences, beliefs, and the social environment—all potentially decisive factors in the prevention of violence. Education has the ability to influence attitudes, civic values, trust, and pro-social behaviour. These traits can affect young people’s ability to achieve employment and social recognition in legal ventures. Discussing these direct and indirect links, we not only consider studies on the effects of education on VE, but also on crime more general.

The direct links: evidence on the connection between education and violence

Since the direct links between education and VE are extremely hard to capture, there exists only a small number of studies that are able to causally identify effects of educational interventions on violence. In Afghanistan, researchers working with the Mercy Corps tested the causal impacts of a vocational training program, cash transfers, and a combination of both on youth attitudes toward and willingness to support political violence. While neither vocational training nor the cash transfers had lasting effects, the combination of both resulted in a sustained and fairly large reduction in willingness to support armed opposition groups. This study, however, only looks at attitudes and not at actual participation in violent activities.

In Liberia, an employment programme in the agricultural sector targeted high-risk young men using an extensive pre-screening mechanism based on prior war involvement to evaluate the causal impact of agricultural training, capital inputs, and counselling on ex-fighters’ behaviour. Fourteen months after training completion, treated men were significantly more involved in farming activities, had higher incomes, and showed reduced engagement in illicit activities. Although the program had little effect on peer networks, aggression, and attitudes towards violence and democracy, the men showed reduced interest in mercenary work in a nearby war.

In a follow-up study, cognitive behavioural therapy (CBT) was shown to be a viable tool to prevent young at-risk individuals from engaging in violence (through learning about self-control) and to adopt an anti-criminal, anti-violent life-style and identity. Importantly, the therapy’s effects on lifestyle changes and self-investment were reinforced with cash transfers, and significant a year after the intervention.

The still limited evidence suggests that most promising programs combine vocational training with cash or in-kind transfers and are well targeted at young at-risk men in post-conflict settings. These are places where violence is still frequent and support or attachment to violent groups is common. Combining skills development and transfers makes sustained effects over longer periods more likely, because young men may overcome credit constraints, allowing them to acquire tools or other investment goods that enables them to turn to more productive activities (e.g., farming).

Education can shape an individual’s skills and economic opportunities, social environment, civic values, pro-social behaviour, trust levels, and self-esteem. It thus might change the likelihood to engage in violence via indirect mechanisms. Numerous studies examine the effects of education on these intermediate outcomes that potentially improve the prospects of monetary and social rewards in non-violent activities.

Becker (1968) modelled participation in violent or criminal activities as an occupational choice. Individuals engage either in legal market activities or illegal criminal undertakings based on what yields a higher expected return. Empirically, there is evidence that labour market conditions indeed affect people’s choices to join both criminal organizations and legal ventures. At the country level, higher economic growth has been shown to decrease civil conflict, as the short-term opportunity costs of being a rebel surge. Global commodity price shocks also have significant effects on local labour market conditions and shape the way individuals choose legal or criminal activities. During the Colombian civil war, a fall in coffee prices led to wage reductions on coffee plantations, increasing the number of individuals engaged in rebel movements, and stimulating violent conflict in coffee producing regions. An exogenous rise in the global price of oil, coal, and gold, in contrast, intensified criminal activities because the increased government tax revenues led to contests over resource rents.

In either legal or illegal activities, education may change the relative pay-offs that young individuals make. It improves hard skills (like literacy and numeracy) and soft skills (such as critical thinking) that are notably crucial to succeed in the legal labour market. At the core of the argument: education increases productivity, leading to higher earnings in legal enterprises, and consequently raises the opportunity cost of joining a militia or violent extremist group. Not surprisingly, the quality of education seems to particularly matter , e.g., programs with better teachers provide better opportunities for skill accumulation and future labour market success. A crucial assumption, nonetheless, is that education does not make individuals more productive in criminal or violent activities (or at least make them relatively more productive in legal activities), which is debatable.

Lifting economic constraints, though, seems not to be enough to prevent VE. Most scholars tend to agree that economic factors only matter at the margin and that other motivations are important to understand why individuals join violent groups. Improving income and employment can deter individuals from crime and mercenary work where material incentives are particularly important. However, they matter less for more expressive or ideological violence. Joining violent extremist movements may have more non-material benefits such as status, recognition, valuable social ties, and spiritual or religious belonging provided to group members and their families.

The school environment is important in shaping young individuals’ behaviours. Presumably quite evident—but no less important—is the way schools and after-school programs can keep kids off the streets and engage them socially and educationally, known in the literature as lock-in or incapacitation. In Denmark, researchers found a positive school lock-in effect reducing adolescent crime and violence . In the US, school attendance reduced juvenile property crime while increasing violent crime. Researchers hypothesise that the latter effect may be explained by intensified interaction between students. They recommend to design smaller, neighbourhood-based afterschool programs that encourage structured interaction between juveniles and include conflict resolution components.

Closely related are peer effects among students. A school environment with more motivated and/or more able fellow students can promote better learning and increase pupils’ aspirations to invest in their own education. In contrast, having more peers engaging in aggressive or criminal attitudes (such as drug use, gang membership, etc.) may decrease learning. The randomly assigned re-allocation of at-risk adolescents to better US middle schools or high schools raised the returns to learning as being less exposed to crime-prone youth is consistent with reducing negative peer effects, especially in middle schools. In addition, peers with better characteristics may also delay the first criminal acts, preventing very serious offenses in years when adolescents are most at risk. This may completely alter the future trajectory. However, if disadvantaged youth are concentrated in the same schools and neighbourhoods, the social multipliers in criminal behaviour lead to a higher intensity of offences and in particular increase the probability that youth get arrested for committing these crimes in groups.

Citizenship and ideology: two sides of the same coin

Schooling can foster citizenship and instil common civic values and political attitudes. Compulsory schooling has been shown to be instrumental in at the Age of Mass Migration” (late 19th century) when tens of millions of migrants with diverse cultural values arrives at US shores. Some scholars point out that education raises the appreciation for cooperation and increased adherence to social norms . The values transmitted in school may reduce the scope and attractiveness of violent groups and promote peace.

Instilling values and attitudes in school may notwithstanding also be used in more ideologist and propagandistic ways. A well-identified study analysing a textbook reform in China found significant effects on pupils’ support for the Chinese government. The study concludes that education can effectively indoctrinate students, as under the new curriculum students trusted the government more, viewed Chinese political institutions as more democratic, and were also more sceptical of free markets. Notably, China is using these exact educational tools in an authoritarian and repressive way to prevent violent uprisings in Xinxiang. It is important to point out the inherent danger of creating an undifferentiated and widely applicable definition of terrorism, as it implies apparent negative consequences for minorities under authoritarian regimes. It appears that in the name of countering VE, any instrument is permissible among the security council members.

Finally, education offers alternative paths to self-esteem, self-control, and social identity by providing a sense of belonging, thereby reducing the relative attractiveness of violent groups. Yet, not only schools shape the way young individuals identify; gangs, for example, use a mixture of coercion, indoctrination, and encouragement to form the self-image and behaviour of young men. Researchers studying gangs in the US and Latin America argue that status, recognition, valuable social ties, and spiritual or religious belonging is provided to gang members and their families. These are important reasons for individuals to join such groups.

Despite spending millions on educational interventions in fragile and post-conflict states with the implicit or explicit goal of reducing VE, we still know very little about the effectiveness of these interventions in reducing participation in violent extremism. In particular, there is little quantitative research about possible adverse effects of such attempts, and we encourage policy makers to invest more in research before spending more on programs with unknown effects. Nevertheless, the existing research can teach some lessons: