Does broadening financial access to large segments of the population pose risks to financial stability? Not necessarily, according to recent remarks by IMF managing director Christine Lagarde. Increasing access to basic financial transactions such as payments does not threaten financial stability, especially when appropriate supervisory and regulatory frameworks are in place. In fact, with the right regulatory supervision, increased access to financial services can result in both micro and macro benefits. Recognizing the macroeconomic and regulatory dimensions of financial inclusion, CGD and the IMF joined forces for a seminar to kick off the IMF Spring Meetings 2016.

Watch Christine Lagarde’s comments on the macroeconomic benefits of financial inclusion from 6:30-8:17 in this video.

Watch Subir Gokarn and Aslı Demirgüç-Kunt discuss the risks of broadening credit access from 43:19-46:00 in this video.

The first panel also tackled ways to lower barriers to financial inclusion for traditionally marginalized groups, particularly women. Despite broad advances in improving access to basic financial services, the male-female financial inclusion gap has remained persistent. IMF’s Subir Gokarn and Gates Foundation’s Gargee Ghosh highlighted the role of attitudes and trust as key barriers to the uptake of financial services by marginalized customers. Product design is crucial to overcome such behavioral biases and to ensure that financial products are catered to the particular needs of consumers (also discussed in this CGD blog post). While the panel talked about the role of financial literacy and branchless banking in addressing some of the barriers faced by women, IMF’s Ratna Sahay went a step further, emphasizing a bolder approach to address the gender gap and recommended greater involvement of women in the supply side as financial services providers.

Watch Ratna Sahay discuss ways to reduce the gender gap in financial inclusion from 56:32-58:13 in this video. 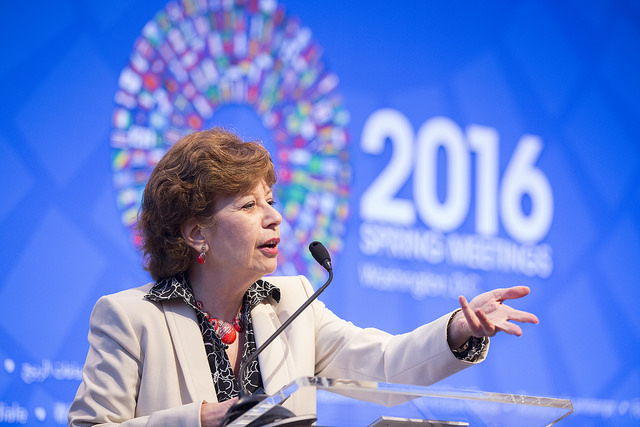 Watch Liliana Rojas-Suarez present CGD’s recent report on how regulations can improve financial inclusion from 7:05-9:54 in this video.

Any conversation about financial inclusion is incomplete without discussing the role of technology. Digital advances have played a major role in expanding financial services to previously underserved sections of the population. However, they have also introduced new risks through new products, players, and models. One important challenge for regulators is to not fall behind the technological curve, as noted by Nicola Véron, senior fellow at Bruegel. However, at the same time, regulators have to be cautious about not regulating prematurely, which could stifle innovation. The CGD report recommends striking a balance between ex ante and ex post regulations, where clear rules are specified ex ante but with the option for ex post intervention as services and providers evolve.

Watch Stijn Claessens talk about how to strike a balance between ex post and ex ante regulation from 27:13-29:00 in this video.

Watch Tim Adams and Tilman Ehrbeck discuss the need for greater coordination between regulatory and supervisory agencies from 1:08:40-1:10:15 in this video.

Watch Nancy Birdsall’s closing remarks on the future of financial inclusion from 1:26:19-1:28:06 in this video.