Today, we published this year’s Commitment to Development Index (CDI), which ranks 27 of the world’s richest countries in how well their policies help to spread global prosperity to the developing world. 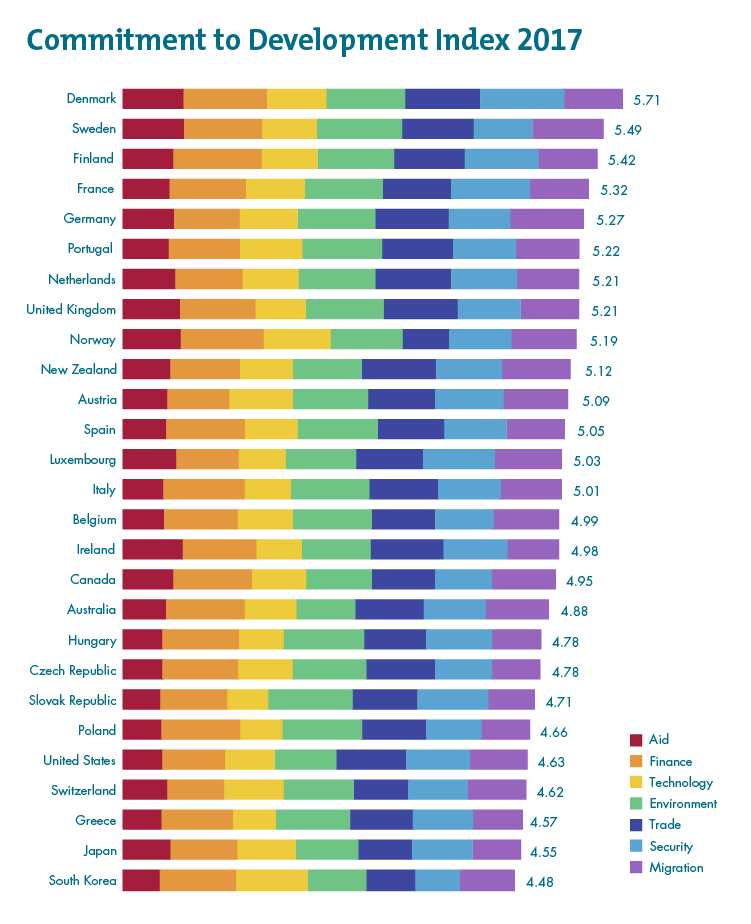 Check out the interactive version of this year's CDI

We will be presenting the Index and our recommendations at the high-level period of the UN General Assembly (UNGA) later this month. As political leaders prepare to meet for UNGA, here are some key takeaways from our research that should help guide their policies and discussions.

1. Leadership on global development isn’t only for the richest!

The CDI analyzes the policies of 27 of the world’s richest countries in seven key areas: aid, finance, technology, environment, trade, security, and migration. The indicators adjust for size and economic prosperity—and the results demonstrate that country wealth does not determine the results. The wealthiest countries—represented by the G7—rank anywhere between fourth and twenty-sixth. Income per person averages half that of the United States in Visegrád countries (Czech Republic, Hungary, Poland, and the Slovak Republic), but all four now rank higher in their commitment to development. Portugal, who ranks sixth, performs well in most components despite being less prosperous than many of the CDI countries. Smart policy design is not a matter of prosperity only. Therefore, our first key message to all the leaders of the 27 CDI-countries:

2. Development is about much more than aid

The CDI draws attention to the fact that global development is about so much more than the amount or quality of foreign development assistance provided. Policymaking in various policy fields directly affect the lives of poor people around the globe.

For example, the design of our policies on technology or finance affect the prospect for people living in poorer countries. Both research and development policies and investment policies are mainly pursued for domestic goals. However, they have a lasting effect on developing countries. Smart intellectual property rights can enable knowledge sharing and technology transfer. Also, bilateral investment agreements with developing countries recognising specific public policy goals such as labour rights, environmental standards, or human rights can have an important effect on the prospect for development.

The commitment to implementing balanced and sustainable policies domestically also sends a strong signal about their importance globally and irrespective of countries borders. Money spent on foreign development assistance does not have the same lasting effect if countries don’t recognise the international impact of their actions in other policy areas. Therefore:

In our integrated world, your policies and decisions as a leader of a rich country have an important bearing on the lives of people in developing nations.

3. Even the bottom-ranked country has smart policies we all can learn from

Like the Sustainable Development Goals (SDGs), the CDI recognizes development has many angles. But while the SDGs cover all nations and their outcomes, the CDI concentrates on the richest countries and emphasizes how policies can make a huge difference to development globally. The fact that we limit our evaluation to high income countries means that policy recommendations are more tailored and relevant. Even the best-ranked countries have weaknesses where they can learn from their peers. Overall leader Denmark performs weaker on migration and could learn from the migration policy designs from countries as varied as Luxembourg, New Zealand, or neighbouring Sweden. Similarly, bottom-ranked South Korea could advise all other 26 CDI countries on how to build long-lasting support for research and development. Accordingly:

Use the CDI as a tool to learn from others and to inspire change through your own best-practice policies.

4. Some overall progress on the Environment component but stronger commitments are needed

Tragically, Hurricane Harvey has reminded the United States how vulnerable we all are when natural disasters hit. Further, people in South Asia were left suffering after massive flooding and devastation affected millions, while earlier this year we saw how the unprecedented drought in Africa affected the lives of millions facing malnutrition. These tragic events, sadly far from unique, remind us that we all need to do more to combat climate change.

This year’s CDI points out that progress has been made—CDI countries report progress in curbing new greenhouse gas emissions and the amount of Ozone-depleting substances has been cut significantly. However, many environmental challenges remain. We need to see an even bigger commitment to development from the CDI countries in the future, such as a complete support for the Paris Agreement and the willingness to tackle issues such as overfishing and deforestation. Thus, our final recommendation:

While progress has been made, many global challenges remain. We ask this generation of world leaders to strengthen and deepen their commitment to development.

These findings show that we and our governments can do so much more to spread prosperity to poorer countries. The CDI serves as a useful tool to identify which national policies still have potential to be designed in a more development friendly way. We hope world leaders use the opportunity of UNGA to discuss ways to make further progress in all policy fields, inspiring each other to achieve more on global development.