Congress Is Neglecting Its Duty on Biofuels

Last week, the Environmental Protection Agency (EPA) finally released proposed targets for blending biofuels with gasoline and diesel for 2014 (18 months late) and for the current year (6 months late). Despite delays and extensive consultation with stakeholders, farmers, the biofuel industry, and oil companies are all criticizing the proposed rule, and litigation is almost certain. I don’t have a dog in that fight, but I am concerned about the possibility of policy-induced biofuel demand contributing to more food price spikes or increased deforestation and climate change. Bottom line, the US policy is not working and Congress needs to reform or repeal it.

The problem, as I describe in a new CGD brief, lies in the growing gaps between the biofuel blending targets and what the markets are able to supply, in the case of cellulosic biofuels, or absorb, in the case of corn-based ethanol.  The statutory mandate for using cellulosic biofuels in 2014 was 1.75 billion gallons, but only around 30 million gallons were actually produced. Meanwhile, the mandate for conventional, corn-based ethanol in 2014 was over 14 billion gallons, but just 13 billion gallons were blended with gasoline. When Congress expanded the mandate in 2007, gasoline consumption was just 140 billion gallons and expected to rise to over 150 gallons by 2015. Instead, as a result of higher gasoline prices (until recently) and increased fuel efficiency, consumption has fallen to just over 130 billion gallons. And since ethanol blends higher than 10 percent can cause corrosion problems for automobile engines, as well as boats, lawn mowers, and other machinery, the US market for ethanol is saturated. 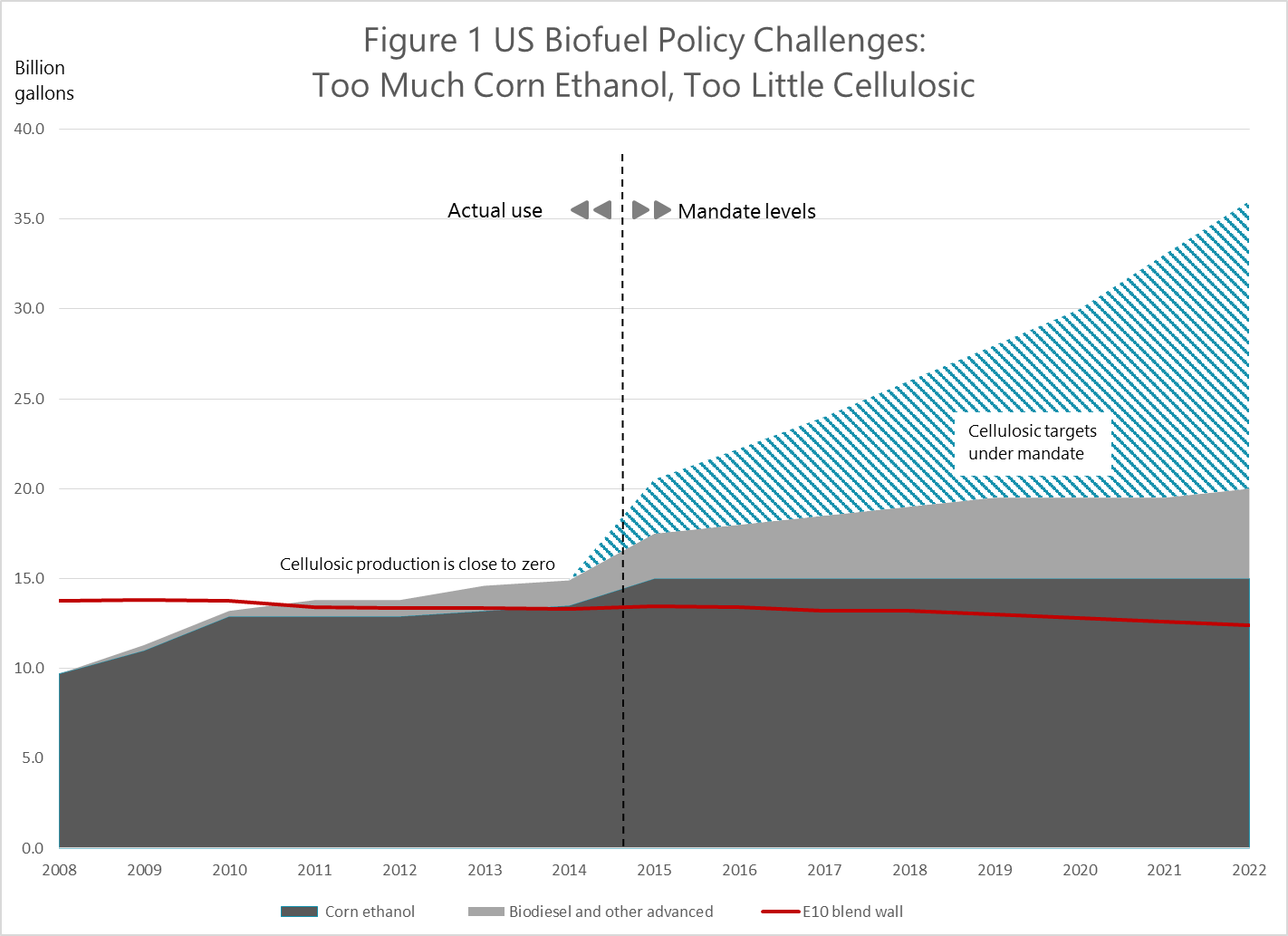 The EPA responded by drastically lowering the cellulosic biofuel mandate, as it has had to do repeatedly since the policy started because of the lack of supply. The agency also, for the first time, lowered the target for conventional ethanol, while setting the 2015 and 2016 targets at levels that will push up against the 10 percent “blend wall.” Farmers don't like the first part of the compromise. Oil companies, which will either need to find an expanded market for ethanol or pay a fine for not meeting the mandate, are unhappy about the latter part.

There’s clearly a need for policy change. In the CGD brief, I recommend four steps Congress should take to make the biofuels mandate more flexible and less costly:

In the wake of the food price spikes in 2007-08, few American policymakers saw increased food insecurity among the poor in developing countries as a reason to rethink the biofuels mandate. It turned out that high food prices weren’t enough to spark real reform, but an old-fashioned slugfest among some of the most powerful lobbies in DC — oil companies and the livestock industry against corn and soy growers and the biofuel industry — might.