Getting Energy Prices Right – Smart but...

Christine Lagarde, managing director of the IMF, returned to CGD last week to talk about getting energy prices right. That’s the title of a new book by Ian Parry and co-authors at the IMF.

Here’s a rough summary of what I said as a discussant, in three parts.

First: Congratulations to Ian Parry and his IMF co-authors on an extraordinary study. The resulting book is poetry for economists: analytically careful, brilliant in the corralling and presentation of data, transparent about assumptions, and fearless in its country-specific conclusions showing specific estimated dollar amounts for the appropriate “corrective taxes.”

Second: Since we at CGD focus on the development-relevant policies of the rich countries, I like that the policy lessons are for us here in the US as much as for the IMF’s developing country borrowers.  Consider a couple US examples: 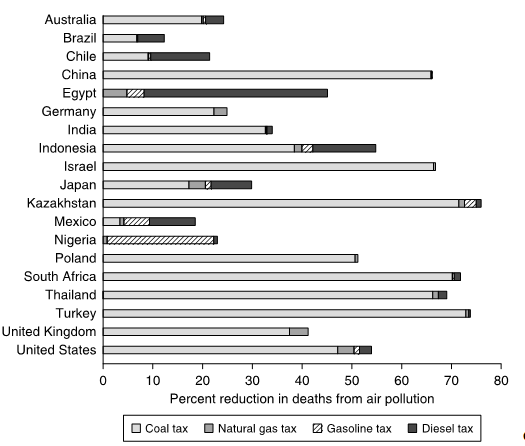 Third: There is no question that the tradeoffs between reducing poverty and inequality and getting energy prices right are much tougher in poorer countries.  Access to energy from whatever source, clean or dirty, is fundamental to poor peoples’ livelihoods and living standards.

The authors note (in a short section at the very end) that in the very poorest countries, raising the price of fuel and electricity to reflect their true costs may not make sense now.  A simple example from Nigeria: a higher gasoline tax would hit the small proportion of rich households that have cars and do most of the driving.  Well and good. But the corrective tax in Nigeria would raise the current price per gallon by about $1.50.

Such an increase would likely lead to a rise in bus fares for millions of poor, peri-urban commuters.  With median consumption in Nigeria only about $1 a day (World Bank Povcal) -- perhaps twice that in large urban areas, even a small increase in bus fares, say 10 cents a trip or 20 cents a day, could amount to an additional 10 percent of current daily consumption for typical commuters [1].

The smart IMF answer is to make higher energy prices revenue-neutral, that is, to somehow return the resulting revenue to the people. But successful tax shifting schemes in British Columbia, Germany, and Sweden rely on reducing payroll, income, and corporate taxes – while most workers in developing countries are in the informal sector and don’t pay such taxes.

Instead, poor people in most developing countries pay consumption (e.g. value-added taxes or VAT) and other indirect taxes. In Latin America, for example, these consumption taxes mean people living on the edge of poverty are often net payers into the tax system. Indeed, indirect taxes even push some households below the poverty line.  Cutting the VAT to offset higher fossil fuel energy taxes would mean reducing a regressive but relatively efficient tax. But doing so may not be enough to make higher fossil fuel energy prices household-budget neutral for the large number of households not yet in the income-secure middle class.

A better answer is to ensure a robust system of targeted cash transfers  to lower-income households before getting energy prices right.  That’s a tall order—though one made easier recently by new biometric identification technologies.

These issues are a major challenge for IMF operational staff, as the Managing Director made clear in her response to my comments.  The tradeoffs and the politics will be different in each country. The solution will be to develop transition paths that combine reducing energy poverty, avoiding greater inequality of overall consumption, and getting closer to “right” prices. Even in upper middle-income countries this is likely to require looking beyond cuts in other taxes not paid by low-income households to the creation of robust cash transfer programs.

[1] The added tax burden is even more striking if we compare Nigeria to the United States. The change in fuel prices suggested by the corrective tax (+$1.55/gallon) would amount to about 100 percent of median daily consumption  in Nigeria,. The change in the US corrective tax (about $1.50/gallon) would amount to less than 2 percent of median daily income (of $40-$50) in the United States (see Annex table 6.2.1 in the book).

The Fed’s and the IMF’s Emergency Tools for Emerging Markets
Lucas Sala
and
Mark Plant
May 18, 2022