A campaign to rally public support for the Sustainable Development Goals is calling upon people to #LightTheWay to fight poverty. It’s a lovely image: millions of people holding “candles, lanterns, and torches!” to urge world leaders as they meet in New York to make commitments to make the world a better place. Light is a symbol rich in religious connotations and evocative of human progress.

Light is also essential to development. Energy consumption is pretty strongly correlated with achievement of many of the objectives of the SDGs. Here’s a correlation with the UN’s Human Development Index. 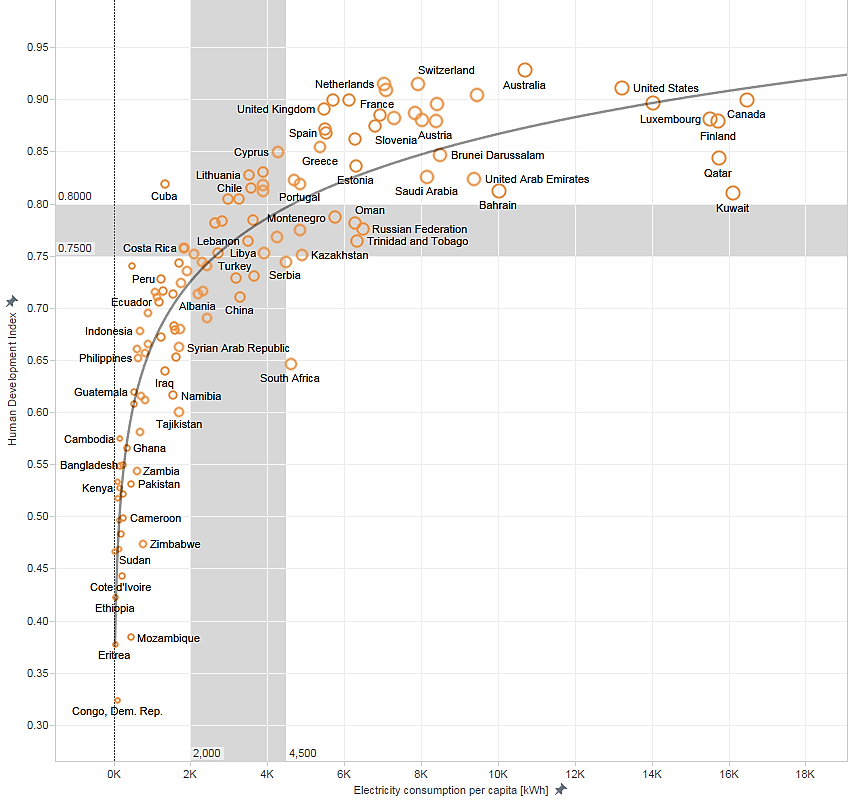 Yet there’s something ironic, and perhaps unsettling, about all of this. Candles, lanterns, and torches are the types of lights people in developed countries use when the regular lights go out.  In Washington DC, candles and flashlights are what we keep in the basement for emergencies. When my neighborhood had a weeklong blackout a few summers ago, we fled the city rather than endure a lack of lights, refrigeration, and air conditioning.

Imagery aside, could idealistic symbolism somehow bleed over into policymaking? What if the UN got the message that the globally aware public wants to support the world’s poor with… lanterns? Sustainable Development Goal Seven calls for “access to affordable reliable, sustainable and modern energy for all.” So far, so good.

But the current proposed indicator for measuring universal access to modern energy is the IEA’s best guesses for the number of people consuming at least 100 kilowatt-hours per year. If you live in a rural area, you hit “modern” energy at only 50 kWh/yr. Given current technologies, this much power will basically give you a few lights and a cell phone charger. In other words, a lantern. That’s better than nothing, but it certainly isn’t anything close to a common understanding of modern. No fridge, no stove, no laptop, no television, no washing machine, no air conditioning.

The SDGs are at risk of setting the energy goal far too low. It’s like making income goals solely about reaching $1.25 per day. Or education solely about basic literacy. These are fine first steps.  But no one would declare development success at these very minimal levels of “access to income” or “access to education”. (A CGD working group has been looking at energy access definitions and will soon be proposing alternative nomenclature and thresholds.)

Focusing only on consumer-end energy usage is also deeply misleading for developing countries. A cell phone may be charged with just a little bit of power, but to make it actually function requires lots more energy. One estimate even suggests that an iPhone uses as much energy as a refrigerator once all the servers, towers, and other backend infrastructure are included.

More importantly, a country where everyone is consuming just 100 kWh/yr is going to be an extremely poor and deeply unemployed place. Look again at the graphic above. Cuba is the only country in the world with a high Human Development Index score and relatively low electricity consumption. Yet, it’s still some 14 times the kWh/cap/yr target for modern energy access.  In fact, Cuba is the only country with a high HDI where average consumption is below 2,000 kWh/cap/yr. (For reference, the American average is over 13,000 kWh.)

So, I’m glad the public is being made aware of the SDGs, that people are rallying to push their politicians, and that energy is finally on the development agenda.  But anyone posing with a candle, should know that a few lights won’t be near enough to really end poverty.

Blog Post
The DFC, World Bank, and How a Nuanced Compromise on Gas...
Todd Moss