How to Avoid Another Bangladesh Factory Disaster - Kimberly Elliott

The recent collapse of a factory building in Bangladesh that killed hundreds of people making clothing for export has shined a harsh spotlight on the lack of worker protection in such low-income developing countries. But my guest on this week’s show, CGD senior fellow Kimberly Elliott, says that the disaster is unusual only in its magnitude.

Workers engaged in the production of goods for rich country markets endure dangerous working conditions daily, suffering countless smaller, yet nonetheless fatal accidents, as well as illnesses and deaths caused by poor ventilation and exposure to lint, soot, and dangerous chemicals, Kim says. Manufacture of garments is especially prone to such abuses, she adds.

“This is an industry that’s very low wage, very low skill, highly mobile, and highly competitive, so the incentives are for factory managers to cut costs as much as they can,” she says.

“Buyers are looking around the world for the lowest prices they can find, and unfortunately we as consumers are complicit, because we’re looking for the cheapest clothing we can find.” 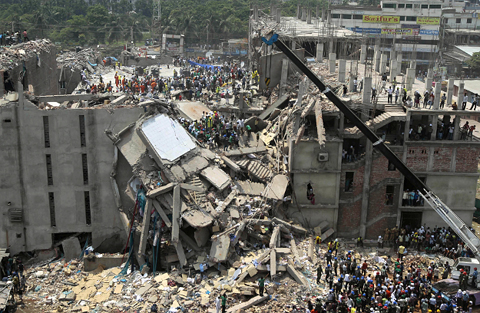 The collapse of the factory building in Bangladesh killed hundreds of people.

Kim, an expert on global trade and labor standards, says that consumers alarmed by these practices can exert some pressures for improvement, by writing to manufacturers, participating in protests, and joining campaigns for better working conditions. But avoiding garments from Bangladesh would hurt the very people that such efforts are meant to help.

“I think the worst thing consumers could do is overreact – that is, look for a Bangladesh label and say, ‘I’m not going to buy this at all.’” Kim says.

Yet this is exactly what some retailers are doing. Disney pulled out of Pakistan after a factory fire last September killed more than 200 people. News reports say that Disney is now preparing to stop buying garments in Bangladesh. Kim says that Disney’s action alone may be a useful “shot across the bow” – a sort of wake-up for Bangladesh to begin enforcing its own labor laws—but it would be terrible if the rest of the industry followed suit.

“This is three million jobs – a huge part of manufacturing in Bangladesh. It’s primarily female workers who are in these factories and they’re taking these jobs by choice – this is not forced labor – because it’s better than any other alternative they have,” she explains. “The alternative is getting married at 14 or 15 and starting to have kids at a very young age. So you don’t want to lose all these jobs.” (See also NYT Room for Debate).

A better approach, Kim says, would be for the United States and other countries that import Bangladeshi garments to encourage Bangladesh to join the Better Work program, a joint effort of the International Labor Organization (ILO) and the International Finance Corporation (IFC), the private sector arm of the World Bank.

“The program is really aimed at being a win-win. It’s trying to improve labor conditions in factories by working with governments and industries in a way that improves labor conditions and – simultaneously – the productivity of workers. Healthier, happier, better-rested workers are also more productive workers,” she says.

In Cambodia, for example, a Better Work program has helped to improve enforcement of labor standards while keeping the country competitive. Cambodia has used the Better Work program to attract buyers who hope to avoid the public relations fallout of workplace disasters such as those that occurred in Pakistan and Bangladesh.

Kim says that the United States could encourage Bangladesh to start a Better Work program and otherwise strengthen the enforcement of labor standards by offering duty-free, quota-free access to US markets in exchange.  While the US has extended preferential trading terms to many developing countries, garments are often exempt. Some 90 percent of Bangladesh’s exports to the United States are apparel and these face an average tariff of 15 percent.

Offering to eliminate the tariff is potentially “a big carrot,” Kim says. “My proposal is to offer Bangladesh and the other poor Asian countries duty-free, quota-free access to the US market contingent on taking some serious steps – like the Better Work program – to improve working conditions.” (African countries already have such access under the Africa Growth and Opportunity Act (AGOA).

Individual firms might have a hard time exerting this kind of pressure on garment factories, because they’re all competing against each other. But an across the board offer from the United States would be extremely appealing. I suggest it seems like a no-brainer.

“That’s right,” Kim said. “And this would create an immediate 15 percent reduction in the factory’s costs because they wouldn’t have to pay the tariff.” That cut in production costs could help to cover the costs of improving worker safety, she says.

Other high-income countries – like Japan and members of the EU – have already instituted similar duty-free, quota-free preferences for developing countries, she says.

The stumbling block in the United States so far has been opposition from the US textile industry, Kim says.

What’s needed, she adds, is strong leadership from the US president, the office of the US Trade Representative, and particularly from Congress – which has the authority to write the legislation that would allow for duty-free, quota-free access for developing countries in exchange for better labor standards that could finally make disasters like the Bangladesh factory collapse a thing of the past.

My thanks to Catherine An for providing a draft for this blog post, and Alex Gordon for editing the Wonkcast.

Blog Post
The WTO and Development—CGD Talks with the Candidates for...
Mark Plant