When China joined the World Trade Organization nearly 20 years ago, the United States saw hope for long-lasting economic gains from commerce with China. Today, that optimism feels like a distant memory as a contentious trade war continues to build. While Chinese products have brought cheaper prices for consumers, import competition has displaced American manufacturing workers. But interestingly, while US imports of goods continued to surge, exports of US services to China also grew—particularly higher education. As we show in a new working paper, a lesser-known consequence of trade liberalization is that more Chinese students have enrolled in US colleges and universities—delivering financial benefits to US schools. If not addressed, mounting trade disputes and US plans to curtail student visas could cost US universities over $1 billion in lost revenues, with harmful ripple effects for US higher education and the broader economy.

US higher education has sustained tremendous growth in its exports overseas, meaning an increasing number of international students have come to the US to pursue undergraduate or graduate education in recent years. These students bring clear benefits to US schools: international students are a valuable resource for universities, allowing universities to maintain a high-quality educational experience and affordable tuition levels for local students.

Unlike traditional delivery of exports, where products are sent and consumed in the destination country, international students come to US universities to consume education services. In doing so, they not only provide much-needed tuition revenue, but also local spending on other goods and services—a recent report by the Department of Commerce estimated that international students contributed over $40 billion to the US economy.

Chinese students have increased by over 500 percent, and account for over half of the total growth in international students in the United States over the past 20 years (Figure 1).

Figure 1. Number of new international students in the US by country of origin 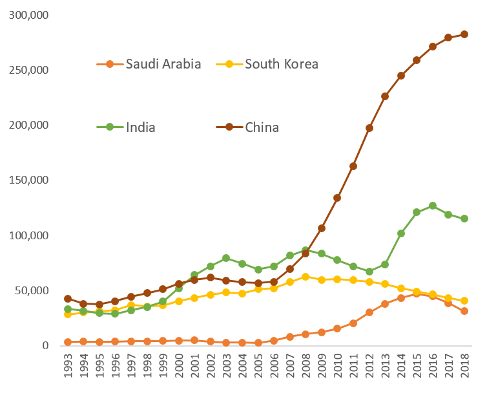 The connection between exports and student migration

As we demonstrate in our paper, China’s accession to the WTO and the ensuing surge in goods exports helped induce many Chinese students to study at US universities. Looking at cities across China, we link measures of trade liberalization exposure to the number of students leaving those cities to study in US universities. To measure exposure to trade liberalization at the city level, we leverage each city’s baseline composition of goods production along with variation across goods in the reduction in tariff uncertainty gained by joining the WTO (Figure 2). 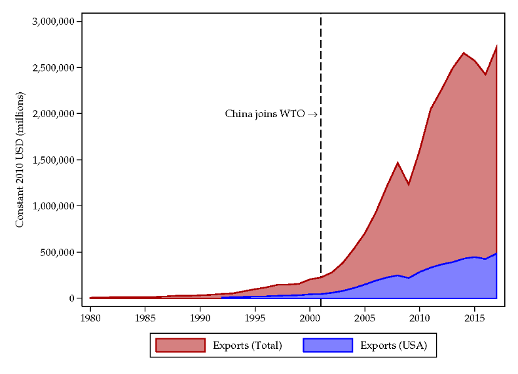 So for instance, if a city was a major producer of textiles, then the reduction in tariffs for textiles would have a much bigger impact there than in a city that relied more on, say, tobacco products (Figure 3). Accordingly, we compare student flows to the US from cities where the WTO brought large reductions in tariff uncertainty against cities where the WTO created little to no change in export opportunities. This analysis is possible thanks to a unique combination of data: international student flows with detailed information on city of origin linked to city-level Chinese exports derived from customs data.

Our findings show trade liberalization dramatically increased the number of Chinese students studying in the United States, accounting for a quarter of the total growth in Chinese enrollment during the decade between 2004 and 2014 (Figure 4). A probable explanation for this finding is that export growth expanded the wealth of upper-income families, providing them with the means to finance the large cost of paying for housing and tuition in the United States. Given limited investment opportunities in China, a meaningful fraction of this wealth expansion occurred through housing ownership—our evidence indicates that trade liberalization raised city-level housing prices and real estate income. Other mechanisms, such as changing returns to education or information flows, appear to play less of a role. 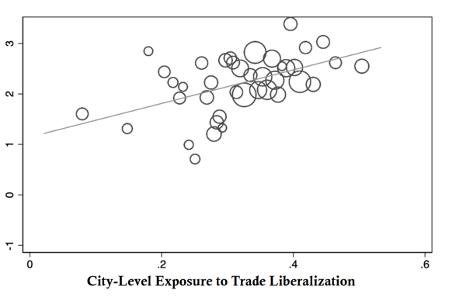 Figure 4. City-level exposure to trade liberalization and corresponding growth in students, 2004-2013 (no outliers) 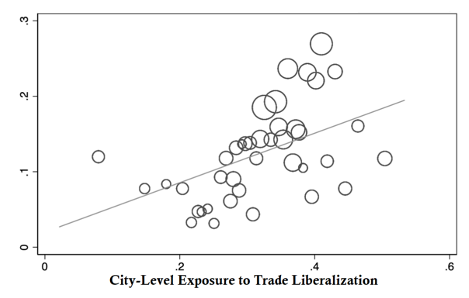 Our findings can inform discussions on the inverted-U shaped relationship between migration and development—that is, the observation that emigration initially rises with economic development, after which the relationship flips. While export growth and ensuing income/wealth expansions allow individuals the ability to afford migration costs, it also may encourage individuals to remain at home and take advantage of better prospects. It is unclear, then, whether economic growth at home, induced by trade liberalization, would lead to more emigration. We resolve this ambiguity and introduce a new channel via which trade-induced income dynamics generate demand for certain types of services (like higher education), driving the flow of individuals across country-borders. This is consistent with education either being an investment or a consumption good. As an investment, financially constrained households may respond to income increases by funding their education abroad. When education is a consumption good, increases in income reallocate expenditures toward services, like education.

The far-reaching impacts of a loss in US tuition revenues

Our results also speak to distributional impacts in US higher education and contribute to a broader discussion on growing regional inequality in the United States. While Chinese students initially tended towards STEM (science, technology, engineering, and mathematics) majors and partially or fully funded doctoral programs, trade liberalization increased the number of Chinese students in social sciences and business-related majors and at the undergraduate level, where funding is minimal and full sticker-price tuition payments are required, generating more revenue for universities and helping to keep tuition for US students down.

Additionally, trade liberalization induced student flows towards less selective universities and in equal proportion to areas of the United States with low and high levels of human capital. This carries implications for local labor markets, where public discourse has stressed the negative impacts of rising deficits in commodity imports from China. Chinese student tuition payments and demand for local services may, in fact, help dampen growing regional inequality.

Foreign student tuition revenues and local demand are a crucial aspect of US services exports. But the ongoing trade wars with China, and policy proposals to suspend or terminate student visas—including the recent announcement from the Trump administration barring international students from staying in the US if their university shifts to online instruction in response to COVID-19—suggest a bleak future for international students hoping to study in the United States. We use our findings to evaluate the consequences of the 2018 US-China trade war —the tariff increase of 20 percentage points in 2018 could cost US universities around 30,000 Chinese students in the next 10 years, a loss of $1.15 billion in tuition revenue, or 8 percent of educational services exports to China. The actual losses to higher education—an industry whose exports are about as large as the combined total exports of soybeans, coal, and natural gas—may likely be greater as continued threats of suspending various work visa programs, like the H-1B visa, and student visas loom.