Over the weekend, Angus Deaton won the Nobel Prize in economics. The previous weekend, the World Bank announced that the global poverty rate dipped below 10 percent in 2015, for the first time in history. These two announcements have an interesting connection.

IMF/World Bank Meetings: Was It Different in Lima? by Nancy Birdsall

One of Deaton’s many contributions has been to help economists improve how we measure consumption and welfare in developing countries. As Chris Blattman noted earlier this week, graduate students in development economics often venture out into the proverbial “field” for the first time lugging well-worn copies of Deaton’s book The Analysis of Household Surveys: A Microeconometric Approach to Development Policy, like missionaries clutching their bibles.  This is part of what people mean when they talk about Deaton promoting “methodological individualism.” He gave development economists the tools to look beyond notoriously unreliable and opaque macroeconomic statistics from poor countries, and dig into micro-level survey data about individuals and households.

No institution has embraced Deaton's methods so enthusiastically as the World Bank. The Bank devotes immense resources to funding and assisting developing countries collect household survey data to make it possible to do the kind of micro analysis Deaton recommended, on health, education, inequality, and not least, the global poverty rate.

Which is why I was a bit surprised when the World Bank released new global poverty numbers last weekend going all the way up to 2015. The hallmark of the Bank’s herculean effort to measure global poverty is that it builds the number from the ground up, collating all the best available micro survey data from around the world.  But here’s the catch: in the countries where most poor people live, the surveys stop in about 2012. Everything beyond 2012 is essentially guesswork, taking us back to the pre-Deaton era.

Even worse, not only is the Bank more or less guessing that poverty fell below 10 percent in 2015, the Bank’s own analysis (see chapter 6) shows that its own method of guessing is systematically biased toward optimism.

Figure 1. Projections show the global poverty rate may have fallen but the number of poor remains high 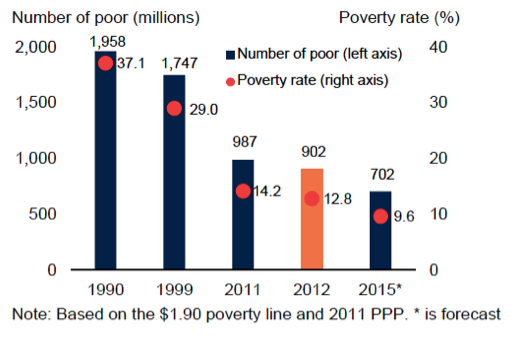 Suppose you have a survey on household consumption in India in 2004, and you need a poverty estimate for 2010. How do you get there? The methodology the Bank uses is to look at national accounts data to measure growth in household consumption from 2004 to 2010, apply this growth rate to the 2004 survey data, and estimate a new poverty rate.

This method embodies two big assumptions, which become very controversial if you utter them out loud. The first is that “Growth is Good for the Poor.” This is the title of a much-cited World Bank paper, by David Dollar and Aart Kraay. They show that on average, across countries and recent time periods, when average incomes rise, incomes of the bottom quintiles of the income distribution rise proportionally. That result still stands. But bear in mind, while this finding holds on average, individual countries may experience periods of extremely progressive or regressive growth. 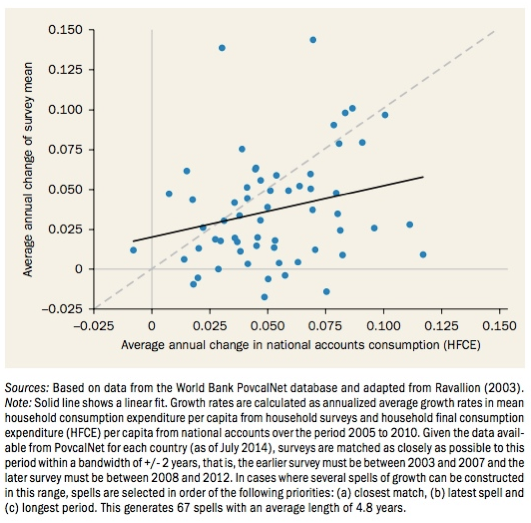 The report concludes that if the World Bank had applied the extrapolation methodology to India — assuming growth was good for the poor, and national accounts growth predicts growth in survey means — it would have underestimated the number of poor people by about 200 million in 2010. Keep in mind the Bank estimates there were about a billion poor people in the entire world that year. That’s not a small error.

It is clear that the researchers deep in the belly of the Bank hold their noses when they do extrapolations to come up with the latest poverty numbers, and would prefer to focus on years where there is survey data. But one can imagine — and note, this is purely speculation — that pressure from somewhere higher up in the bureaucracy to have headlines for 2015 is quite strong. If public relations has gotten ahead of real knowledge, that would be shame.

The first step is admitting you have a problem

There’s a great essay by Paul Krugman, “The Fall and Rise of Development Economics,” that tells the story of how Europeans’ maps of sub-Saharan Africa from the 15th to the 19th century got better and better along the coasts — where Europeans were, ahem, “exploring” — and worse and worse in the interior. The reason is obvious: over time, Europeans learned more, but the standards of map-making also improved. It was no longer acceptable to rely on hearsay. Stories of mythical creatures in the interior gave way to blank space on the map, while the coasts were fleshed out with sextants and compasses.

Krugman notes that the same thing happened in development economics from the 1940s to the 1970s. The deep intuitions of Albert Hirschman and Rosenstein Rodan were abandoned, as modern theorists searched for more rigorous mathematical formulations. While Krugman is concerned with theory, there may be an analogy to empirics, and what we know — or don’t know — about global poverty.

Deaton gave development economists the equivalent of sextants and compasses. The World Bank and the broader discipline have taken up these tools and dramatically improved our knowledge of the map of global poverty. But parts of the map, including everything added from 2012 to 2015, are still basically built on tall tales of mythical creatures. In order to make more progress, we may need to put those stories to rest, and admit how much we don’t know.