Immunization saves millions of lives, is among the most cost-effective health interventions ever developed, and has attracted a great deal of attention and funding from public and private donors in recent years.  Indeed, global health leaders have committed to making this the ‘Decade of Vaccines’ with the vision of delivering universal access to immunization by 2020, and the World Health Organization has put out a Global Vaccine Action Plan (GVAP) to serve as a blueprint to achieving this goal.

The plan – which was endorsed by 194 countries – has ambitious goals and indicators such as eradicating polio by 2018, meeting 90% coverage targets in every region, and exceeding the Millennium Development Goal on reducing child mortality by 2020. But achieving these goals is contingent upon closing a funding gap that is estimated to be $23 billion in the next decade.

So three years into the ‘Decade of Vaccines’ and on the occasion of World Immunization Week, we ask:  how will all 194 countries be held accountable to these goals moving forward?

In the journal Vaccine’s Decade of Vaccines supplement – a collaboration featuring 30 articles on different aspects of vaccination - we propose a way to rank and compare countries in terms of their commitment to vaccination. We look at a multitude of indicators on performance – as measured by coverage, stability and equality – as well as financing and institutions – as measured by spending per capita and having a technical advisory group which provides evidence-based support on vaccine introduction.  In addition to looking at recipient countries, we look at how much donors contribute to global vaccination efforts (research and development, contributions to GAVI and Global Polio Eradication Initiative).

We find that many populous middle-income countries, such as India, Nigeria and Indonesia, are lagging behind: together, these countries are home to 12 million unvaccinated children, which is over half of the total number of unvaccinated children. We also find that many middle-income countries finance their own vaccination programs, and spend more per infant, mainly because they pay more per vaccine. Many of these countries are also lacking institutions such as technical advisory groups, or multi-year plans, to ensure better vaccination planning and outcomes.  In terms of donors, we find that Norway, United Kingdom and Ireland contribute the largest share of their GDP into these initiatives. 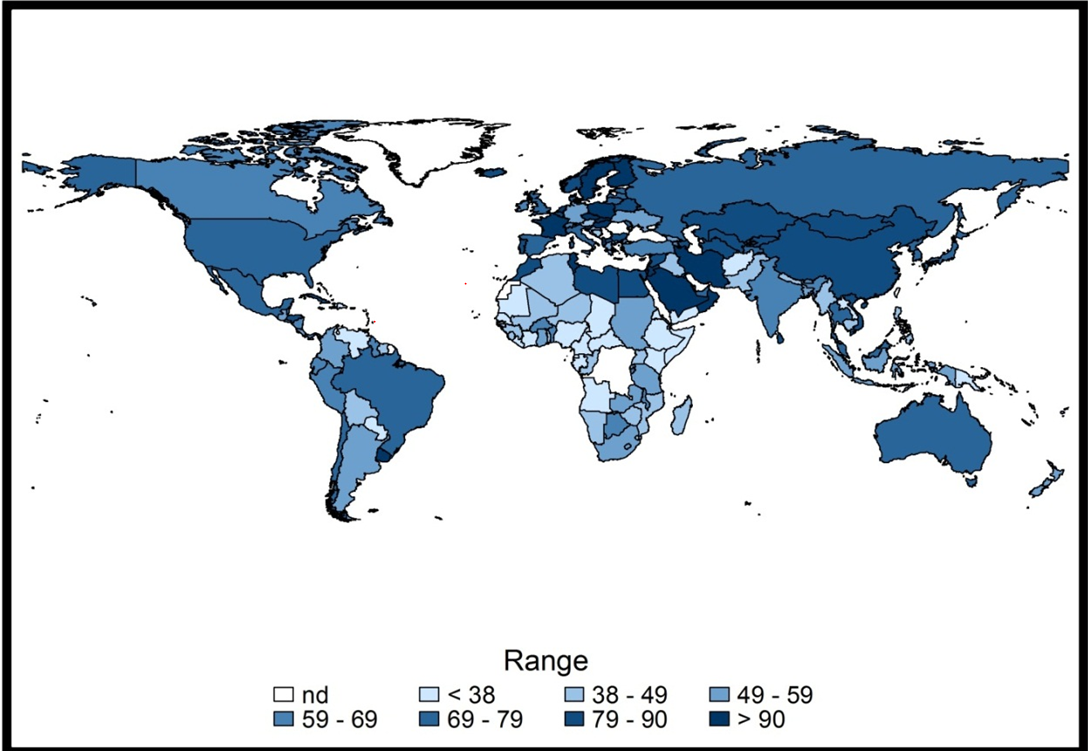 The geography of vaccination: sub-Saharan Africa and populous MIC lag behind in terms of performance. Source: Glassman et al, 2013

The financial constraints faced by lower middle-income countries as they move towards full immunization is set to exacerbate as many will cross GAVI’s graduation threshold of $1,500 income per capita, losing both financial support and –after a five-year transition period- access to GAVI’s lower prices. An article in the supplement provides an overview of these issues, suggesting that more financial support is not the answer, but instead greater political will and technical assistance.

What could be done? Technical assistance and market shaping both carry huge potential: just last week, the GAVI Alliance secured a 30% price reduction for the pentavalent (five in one; DPT, Hep B, HiB) vaccine in India. A more permanent solution could be a pooled procurement scheme between middle-income countries, where they purchase together to secure lower prices, or simply the extension of GAVI prices to countries that graduate or have income per capita close to graduators, as in the Philippines.

Almost 200 countries have signed on to the Global Vaccine Action Plan, but this plan will only achieve its targets if immunization is perceived as a truly global effort and the laggards – concentrated in middle-income countries – are incentivized to perform better, and are given a hand.

Blog Post
Beyond the Rhetoric of Equity: Will the Frontline...
Asif Saleh, Maria Khan and Richard A. Cash

Blog Post
Don’t Cheer Yet – There Is Too Much at Stake on COVID-19...
Kalipso Chalkidou