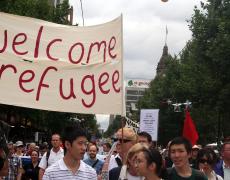 New Zealand's "Climate Refugee" Visas: Lessons for the Rest of the World

The New Zealand example, while well-intentioned, shows that developed countries cannot and should not merely skip to the end result.

Getting the Most Out of Your Organization’s Carbon Offsets

In October 2018, the UN-convened Intergovernmental Panel on Climate Change delivered a high confidence estimate that the world has 12 years to achieve net CO2 emission reductions to limit global warming to 1.5° C. Shortly thereafter, Oxfam put out a blog post calling out the international development and aid sector for not thinking critically enough about our own carbon footprint, knowing that the most devastating effects of climate change will be felt by vulnerable populations in low-income countries. At the very least, the post suggested, purchasing carbon offsets would be a first step towards change.

Could China and Its Fellow BRICS Nations Lead the Way on Climate Change?

The stalemate in the latest round of climate negotiations, held in Doha, Qatar, last month, makes it clear that a fresh approach is needed if the world is to avert climate catastrophe. One part of the solution should be a new global climate agency, founded, financed and led by a coalition of the big emerging market countries.

In a break with the post-World War II practice of international organizations being headquartered in either Europe or the US, South Korea beat five nations to become the host of the Green Climate Fund (GCF), a new entity that may become a key player in international efforts to avert runaway climate change. The GCF interim secretariat announced late last month that Songdo International Business District, a gleaming new satellite city adjacent to South Korea’s main airport, won the competition to host the fund. The decision is expected to be confirmed at the 18th Conference of the Parties (COP) of the United Nations Framework Convention on Climate Change (UNFCCC) that will get underway in Doha, Qatar, later this month.

How to Decide Which Countries Should Get Climate Adaptation Finance?

How will the international community raise billions of dollars to help developing countries reduce emissions and respond to the already emerging impacts of climate change? How will the funds be allocated and delivered to recipient countries? Next month’s climate summit in Doha is expected to focus intensely on these questions.

He focuses on what he calls three scary numbers:

Let’s not be the fat guy bully in the room. I’ll explain.

The Washington Post on Monday highlighted the latest results from a randomized study of a development intervention by the folks at MIT.   This time, the subject of the study was clean cookstoves.  As the Post noted, that’s timely because Hillary Clinton has been a strong advocate, backing the

Godot Actually Made It To Copenhagen … and Nothing Happened. Now What?

In the wake of the shambles at Copenhagen, we could do worse than contemplate Vladimir and Estragon in Samuel Beckett’s Waiting for Godot. The two characters converse endlessly and anxiously, while they wait for the mysterious Godot to arrive and secure their enlightenment. But Godot never shows up, even though he keeps sending word that he will.

Right – it’s an “agreement”… to punt down the field for some transient face-saving. Obama said he had to fly back to Washington early because of the weather (riiiight ….). These guys have signally failed us. The Americans failed on emissions reductions. The Chinese failed on transparency. Plenty of credit to go around, as it turns out. But the problem doesn’t go away, and efforts to find solutions outside of the failed negotiating framework now become more crucial and urgent than ever.