Recent extreme weather events in the US, Canada, Europe and beyond have shown the high-income countries how vulnerable it is to climate change—a feeling that lower- and middle-income countries have known for years. Germany’s actions over the past decade on climate finance have established it as a leader with climate negotiations and commitments on climate finance at a critical moment.

The new foreign secretary, Lizz Truss, will meet with the chancellor in the coming weeks to determine her department’s budget over the coming three years. If the chancellor maintains his current stance on counting aid spend even where it has no fiscal cost, and also treating the aid target as a ceiling rather than a floor, it would be like the tail wagging the dog,* with the  Chancellor’s stance on the aid target (the tail in this case) directing the UK’s international approach (the much-weightier dog) instead of vice versa, as one would hope. And it could also mean the foreign secretary would have to implement a third round of cuts in UK aid in spring 2022.

East Asia’s miracle countries are the stuff of both economic legend and considerable debate. One part of the story may be demographics: East Asia saw rising life expectancy and declining birth rates that dramatically, if temporarily, increased the proportion of the population that was of working age. But now the demographics have shifted as a result of falling birth rates and a rising population of retirement-aged people. Absent a policy response, that could portend a cursed demographic future.

Giving up the “Statebuilding” Ghost: Lessons from Afghanistan for Foreign Assistance in Fragile States

The end of America’s twenty-year war in Afghanistan will change many paradigms that have dominated US foreign policy for decades. President Biden’s recent assertion that military interventions are not the solution to humanitarian crises is a good place to start.  Just as urgent is the need to revisit the notion that foreign assistance can build a state.

After 16 years under Angela Merkel, the German federal election is just around the corner, with the chancellorship up for grabs. But no matter which parties form the new government, who presides over it as chancellor, and what that person’s gender is, one thing seems certain: the issue of gender equality will have to be at the top of their agenda.

There was some good this week, too, though – most notably the ten-year anniversary of Michael Clemens’s seminal Journal of Economic Perspectives paper, Economics and Emigration: Trillion-Dollar Bills on the Sidewalk? The anniversary prompted Michael to discuss the struggles he had in getting it published, generating a quite extraordinary response from the many, many economists who owe the very shape of their worldview to it. 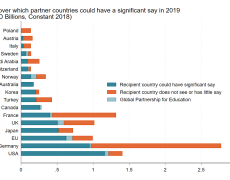 The State of Global Education Finance in Seven Charts: An Update

A couple of years ago, we examined aid data from the OECD and UNESCO Institute for Statistics, analysing how much aid is going to education, where it is allocated, by who, and through what channels. Two years on, we provide an update to see what’s changed.

Things in Afghanistan Are About to Get Worse. Who Should Care, and What Can be Done?

Afghanistan’s history is blighted by the actions of foreigners. The near-neighbours have plenty on their consciences; others further afield do too, including the British a century ago, the Russians in the 1980s, and the US-led NATO coalition over the last 20 years. So who wants what now?