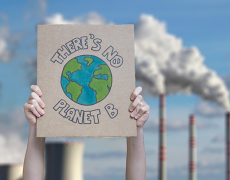 The US and Climate Development Finance: Five Steps from Humility to Ambition

Last week President Biden announced sweeping measures to reengage the US government in the fight against climate change. With US Special Envoy for Climate John Kerry suggesting the need for “humility and ambition,” we suggest five ways for the new US administration to be more ambitious on the international stage.

A decision by President Trump to remove the United States from the 2015 Paris climate agreement would be a shameful act of self-harm. The decision would hurt everyone in the world, and poor people most, by making it harder to avoid a future of bigger storms and fires, disappearing coastlines, and tougher crop-growing conditions. But the most severe and immediate harm would be to the United States, which by banishing itself from the community of nations trying to prevent dangerous climate change would irrevocably damage its global standing.

The Competition is Heating up for Climate Leaders

A Trump administration and a Republican-controlled Congress may spell hard times for progressive climate action at a national and international level. But emerging economies are increasingly realizing their own stake in protecting their populations from climate change while also capitalizing on clean energy technology and manufacturing.

Will Trump be the Grinch that Steals US-Cuba Environmental Cooperation?

Last week, I had the privilege of sitting in on a conference on United States-Cuba relations in Havana that brought together experts on the politics of both countries. The conference was dominated by uncertainty over the future of bilateral ties under a Trump Administration. One of the many prospective casualties of a reversal in US policy toward Cuba would be cooperation on the environment.

President Elect Donald Trump committed his first major personnel act on climate Wednesday, picking Scott Pruitt—Oklahoma Attorney General, climate change denier, and oil industry ally—to head the Environmental Protection Agency. If Pruitt is confirmed to the position, he will be responsible for looking out for not just for narrow oil interests, but all Americans. Maybe he’ll be persuaded to take a more forward-looking stance on climate by the Americans already suffering from sea level rise in Alaska, Florida, and Louisiana. But if that doesn’t concern him, perhaps the United States losing international goodwill and influence to an ascendant China will.

If the US Federal Government Won’t Lead on Climate Action, Who Will?

To say the results of the US election cast a pall over climate negotiations in Marrakech is like saying Indonesian forest fires make Singapore a little hazy.