An Analysis of Overlap Between Refugees and Major Urban Areas in Developing Countries, and Implications for Employment Opportunities and MNC Engagement 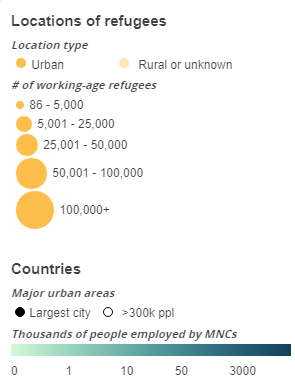 Tackling the Realities of Protracted Displacement: Case Studies on What’s Working and Where We Can Do Better
Global Business and Refugee Crises: A Framework for Sustainable Engagement
Many Refugees in Developing Countries Are Located near Urban Job Opportunities—but Most Are Not Allowed to Work

[3] Huang, C., Charles, S., Post, L., & Gough, K. (2018). Tackling the Realities of Protracted Displacement: Case Studies on What’s Working and Where We Can Do Better. The Center for Global Development and the International Rescue Committee. https://www.cgdev.org/sites/default/files/tackling-realities-protracted-displacement-case-studies-whats-working.pdf.;  Devictor, X. (2017) Forcibly Displaced: Toward a Development Approach Supporting Refugees, the Internally Displaced, and Their Hosts. World Bank. https://openknowledge.worldbank.org/bitstream/handle/10986/25016/Forcibly percent20Displaced_Overview_Web.pdf?sequence=6&isAllowed=y.

[4] Huang, C. (2017). Global Business and Refugee Crises: A Framework for Sustainable Engagement. The Tent Foundation and the Center for Global Development. https://www.cgdev.org/sites/default/files/global-business-and-refugee-crises.pdf.

Publication
The Effect of COVID-19 on the Economic Inclusion of...
Jimmy Graham and Martha Guerrero Ble

Publication
From Displacement to Development: How Colombia Can...
Jimmy Graham et al.