The resources needed for financing the Sustainable Development Goals (SDGs) are estimated at US$ 2.5 to 3 trillion per year. According to the IMF, low-income countries (LICs) will need, on average, additional resources amounting to 15.4 percent of GDP to finance the SDGs in education, health, roads, electricity, and water by 2030. Unfortunately, the COVID-19 pandemic has made mobilization of resources for financing the SGDs almost impossible.

In this blog post, we argue that the COVID-19 crisis has made it imperative for developing countries to begin reforming their tax systems to generate more resources domestically—reforms which they have postponed until now because of vested interests. One area where reform has been resisted is tax expenditures (TEs). Reforming TEs would not only generate additional revenues, but it would also improve taxpayer perception of the fairness of the tax system and enhance budget transparency.

As developing countries face a growing need for additional resources to respond to the pandemic, their domestic revenues have actually taken a hit with the collapse in economic activity. Consumption taxes, for instance, are likely to plummet even more than during the global financial crisis. Hence, tax revenues could be significantly affected for a number of years. Moreover, tax compliance is likely to suffer, since households and businesses under economic stress may simply stop paying taxes. Some tax administrations have already reduced their audit and arrears collection activities to ease the severe financial pressure that many businesses and individuals are facing.

Resource flows from external sources are also projected to decline in 2020 and beyond.  Global foreign direct investment (FDI) in general is expected to shrink by more than 30 percent in 2020, and the impact is likely to be even larger for developing countries. Moreover, global remittances are expected to decline by 20 percent, the sharpest decline in recent history. The outlook for official development assistance (ODA) is bleak, with budgetary pressures in donor countries stemming from the adoption of policies to mitigate the economic and social effects of the pandemic on their citizens. In addition, access to international markets is particularly tough for poor countries. During the first two months of the pandemic, more than US$ 100 billion flew out of emerging markets—more than three times than during the 2008 crisis.

TEs, also known as tax incentives, include exemptions, reduced rates, deductions, and tax credits that reduce the taxpayer's liability as well as the government's revenue collection. While these provisions are used widely to pursue different policy goals, they are costly and often ineffective in reaching their objectives.

Yet, given the striking lack of transparency on TEs in Africa, underreporting is very likely to be an issue.  Therefore, these figures should be interpreted with caution, as a lower bound. Indeed, when it comes to transparency, 26 out of 40 countries currently publish official TE reports on a regular basis in Latin America. By contrast, only 19 African countries reported on their TEs at least once between the years 2000 and 2019. The remaining 64 percent of the countries did not publish any TE reports during this period. In addition, even for those African countries reporting on TEs, the heterogeneity in the scope and detail of information provided is striking. Whereas a few countries such as DR Congo and Morocco provide comprehensive reports with data disaggregated at the TE level, most countries only publish aggregated data (e.g., by tax base) or detailed data for a few TE provisions.

TEs have significant fiscal costs and can result in net revenue losses. So far, corporate income tax (CIT) revenues in Africa have held up, but the CIT bases can start to erode, depleting the ability of African countries to pay for development. Tax incentives for investment, which have been used widely to promote industrial production in developing economies, are a case in point. In some African countries (e.g. Burkina Faso, Côte D’Ivoire, Guinea, Madagascar, and Mauritania), businesses account for more than 60 percent of total revenue foregone through TEs. Yet, these provisions have proven to be significantly less effective than envisioned, and there is a strong, negative relationship between the generosity of tax incentives and revenues from corporate taxes. As shown in Figure 2, for each 10-percentage point increase in CIT incentives, CIT revenue decreases by around 0.35 percent of GDP.

Source: Kronfol and Steenbergen (2020). “Evaluating the Costs and Benefits of Corporate Tax Incentives.”

A proposal for reform

Low-income countries are urged to announce that, as part of their policy reforms, they would re-assess TEs during the next annual budget discussions (or during the discussions on supplementary budgets), with the objective of lowering their annual cost by at least one percentage point of GDP.

This would be significant, given the average tax-to-GDP increases witnessed in recent years in developing economies. Figure 3 shows that countries in Asia, Latin America, and sub-Saharan Africa improved their tax collections on average by under 1 percent of GDP in the past decade. An important component of reform would necessarily have to be a commitment by governments to refrain from granting any new tax concessions. The IMF estimates that revenues in sub-Saharan Africa would fall on average by 2.6 percent of GDP in 2020 because of COVID-19, further highlighting the need for TE reform. 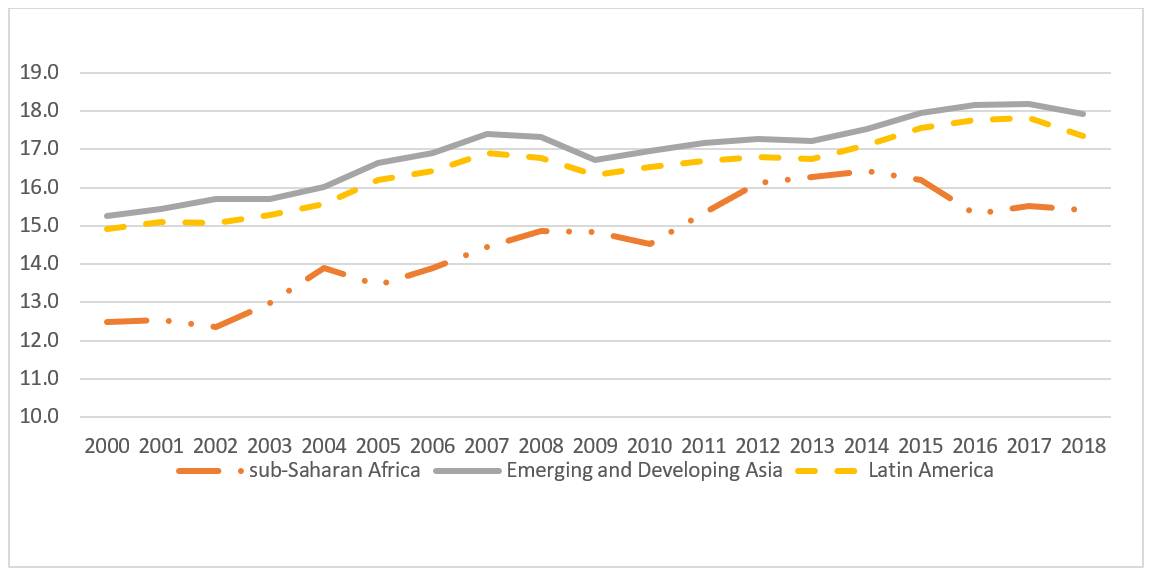 Note: Argentina, Brazil, and Chile are excluded from Latin America.

Reforming TEs would trigger the additional benefit of improving tax compliance. It is common for policymakers in developing countries to complain about low tax compliance in their countries. Tax compliance may be low in part because citizens feel they do not receive quality services from the government. It is also low because taxpayers see how unequal the tax system is (i.e. how the well-off—including the beneficiaries of TEs—do not pay their share of taxes). Thus, a rationalization of TEs would have a favourable impact on overall tax compliance in the economy.

Donor countries will have to do their share as well. They would have to agree to subject their aid-funded projects in developing countries to custom duties and value-added tax (VAT). The cost of tax exemptions with respect to ODA projects can be as high as 3 percent of GDP for countries that depend heavily on aid. There are some donor countries (Netherlands and Norway) that have renounced the exemption-seeking policy. The COVID-19 crisis presents an opportunity to all donor countries to relinquish exemptions for the aid they provide. Unlike the G20 Debt Service Suspension Initiative, which provides a temporary respite from debt obligations to the poorest countries, elimination of exemptions on aid-funded projects would generate a permanent increase in revenues for countries in need.

The bottom line is that COVID-19 presents an opportunity for policymakers to reform TEs. Widespread support for reform can be gained by highlighting the need for additional resources at this juncture to pay for improved health services and to mitigate the impact of the pandemic. The case becomes even stronger when citizens realize that the ultimate beneficiaries of TEs are, in most cases, well-to-do individuals and large enterprises.

This blog post is published jointly with the Council on Economic Policies.

*The GTED is a joint effort of think tanks and research institutions from Europe, Asia, Africa and Latin America led by the Council on Economic Policies (CEP) and the German Development Institute (DIE).