Living “Under the Grid” in Nigeria – New Estimates

Last week, Nigerian President Buhari and President Obama spoke at length in the Oval Office. Much of the discussion focused on defeating Boko Haram and rooting out corruption in Nigeria. Yet, President Obama’s Power Africa Initiative, which aims to help provide access to 60 million households and businesses across Africa, was also high on the agenda. That is no surprise. Over 80 million Nigerians currently live without electricity and the general public is becoming increasingly negative about the pace of power sector improvements. So, where should Power Africa and other partners focus their efforts in Nigeria? One place is the millions of Nigerians – 31 million according to our latest findings – who may live in an area where electricity is available, yet do not have access.

A recent bottom-up study suggests that 98 percent of unconnected Nigerians could access the national grid by 2030. Yet others have challenged the fundamental premise of expanding centralized power generation and distribution. Instead, they emphasize the importance of mini-grid and off-grid solutions, arguing that national grids cannot reach large segments of the population anytime soon. Not to mention, they perpetuate dependence on fossil fuel-based power plants.

We recently tried to shed some further light on the debate by estimating an often-ignored category of people – those who live “under the grid.” These people live in an area where electricity is available, but do not have access to it for any number of reasons. At the time, our back-of-the-envelope estimates suggested that up to 36 percent of Nigerians could actually live under the grid.

Based on constructive feedback, we have now recalculated these estimates using a more rigorous approach. In short, we analyzed Demographic and Health Survey GPS data and then directly mapped it onto the national transmission grid (see methodological note here). Here’s what we found:

Figure 1: "Under the Grid" Population, Distance From Transmission Line (km) 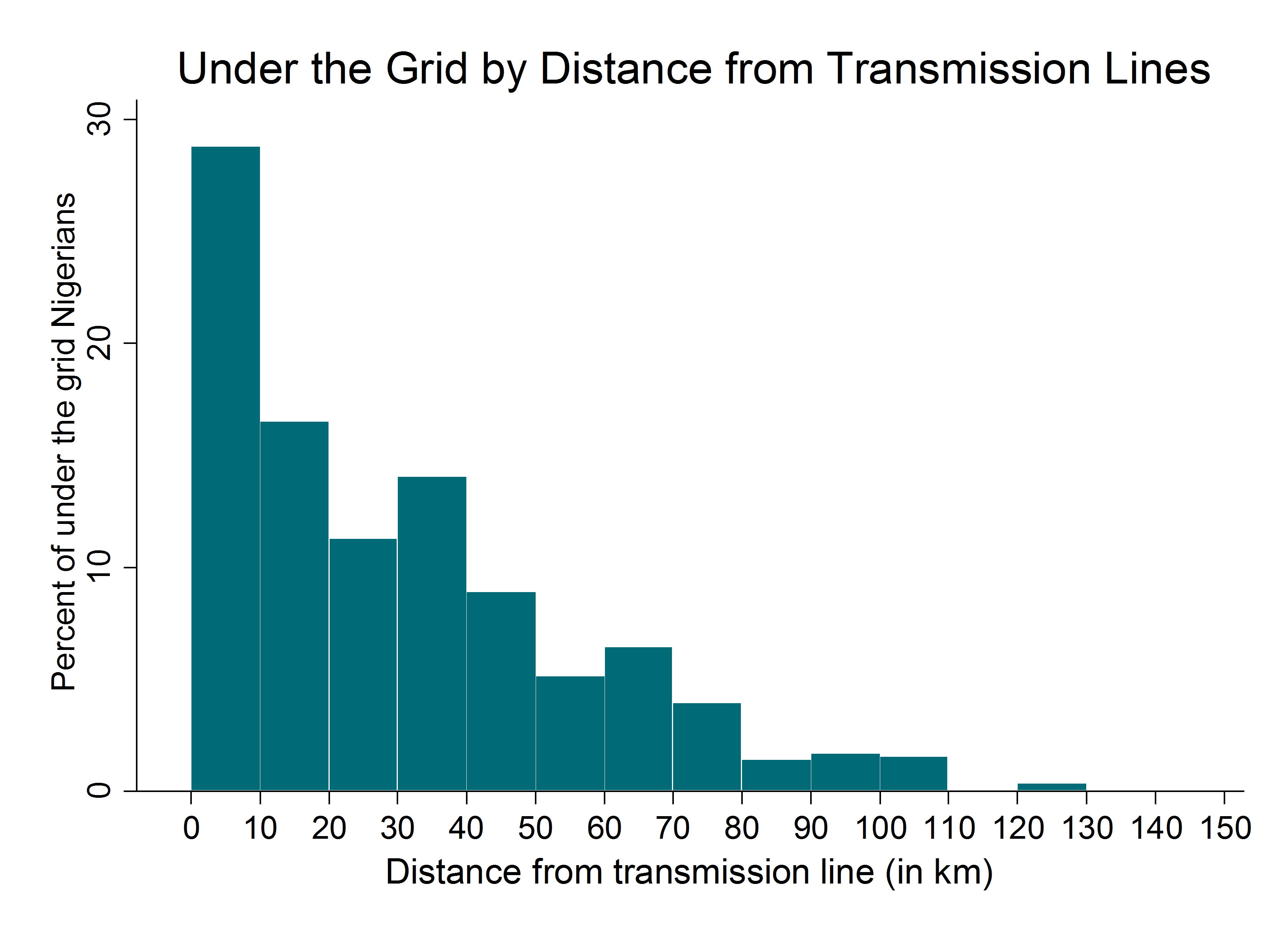 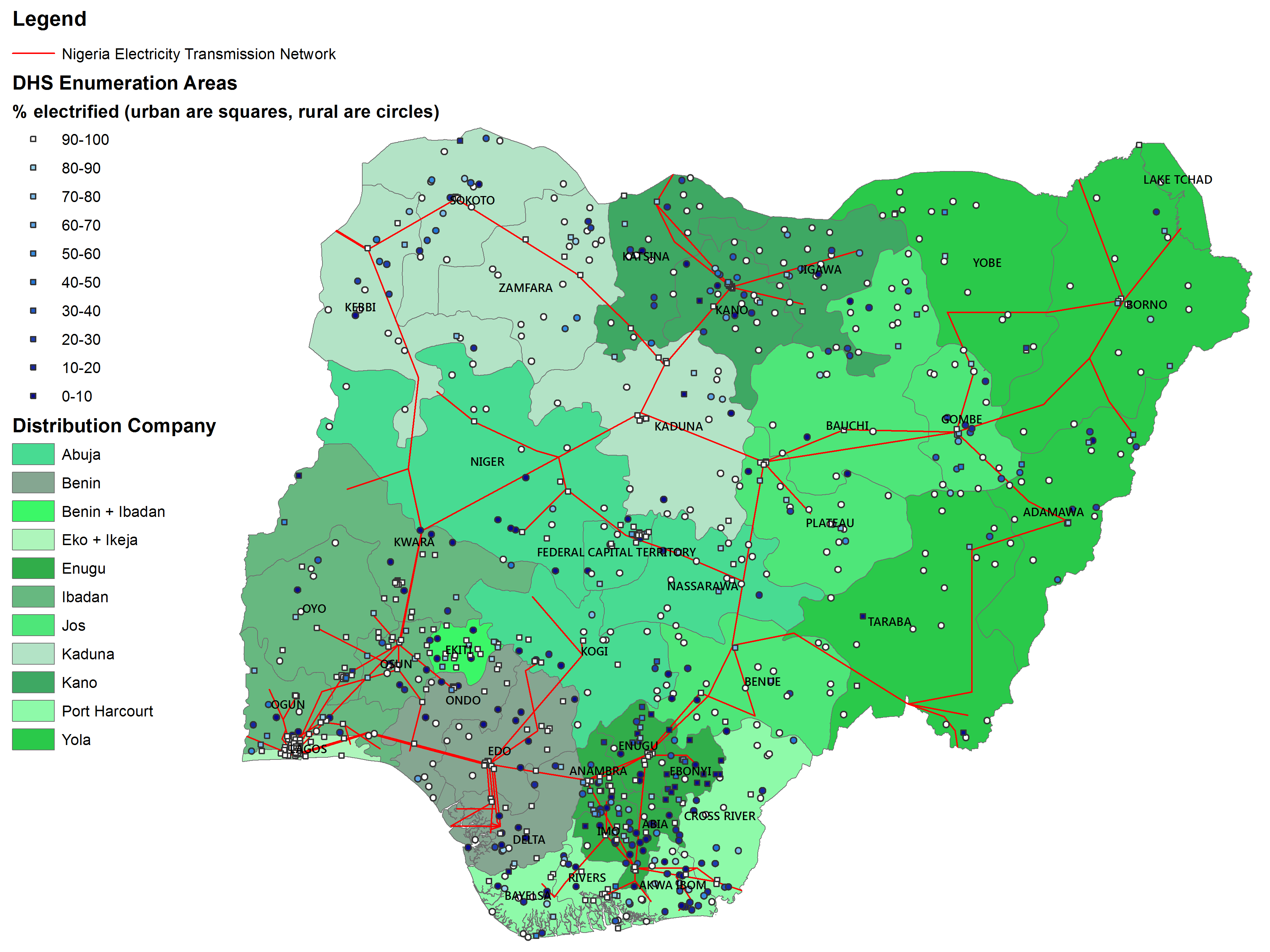 While our revised methodology is considerably more robust than the previous effort, there are still at least two methodological challenges that must be considered.

Overall, this exploratory analysis illustrates that the existing all-or-nothing debate about “on-grid” and “off-grid” solutions is far too simplistic. There are millions of people who live in areas without any access to the national power grid. There are millions more who live in areas with near universal connections, but who suffer from notoriously unreliable power services. And then, there are yet millions more who live under the grid but for some reason – such as high connection costs or unresponsive utilities – do not have a connection. And many of these people – over 20 million according to our latest estimates – are located in rural areas.

There are unique challenges, plus many overlapping ones, for providing and improving the reliability of power for each of these groups. Fundamentally, this will require a nuanced all-of-the-above strategy, which includes new grid extension, distributed power solutions, targeted efforts for connecting under-the-grid households, and systemic regulatory reforms. Absent this, Nigeria and other African countries will never reach their lofty ambitions of achieving universal access.

Blog Post
The Energy for Growth Hub is Connecting the World to a...
Todd Moss

Blog Post
Are We Learning the Right Energy Lesson from Mobile...
Todd Moss and Jacob Kincer