Low-Cost Private Schools: What Have We Learned in the Five Years Since the DFID Rigorous Review

In 2014, the UK’s Department for International Development (DFID) released a “rigorous review” of the literature on private schools in developing countries. Laura Day Ashley and co-authors settled on 59 studies published between 2008 and 2014 that focused on DFID’s 28 priority countries. The review concluded that there is moderate evidence that children attending private schools achieve better learning outcomes, but since many studies do not fully account for the social and economic background of children, there are ambiguities about the true effect of private schools. Published at a peak in the debate about public and private schools, the review made waves. A lengthy public back and forth ensued between the DFID report authors and prominent advocates for private schools James Tooley and David Longfield (including in the The Spectator and the UKFIET website).

Five years on, there has been a slew of new studies. Do the conclusions still stand? We carried out a quick scan of the research published since 2014. We found 78 new studies of varying rigour and type. The recent evidence broadly reinforces the earlier findings. In some places students in private schools do achieve better learning outcomes, but much of this advantage is due to selection of wealthier or better motivated students. What little true positive value-added remains is typically small, and insufficient to help children achieve meaningful learning goals or life outcomes. In addition, the newer research seems to support the earlier conclusion that it is not clear whether or not private schools are able to reach the poorest children.

A rapid search on Google Scholar using search terms such as “non-state providers in education” and “low-cost private schools in education,” plus our own prior knowledge, produced 78 studies. Roughly 42 percent are primary and empirical papers, employing a variety of research methods—with over 60 percent of those studies using an experimental, quasi-experimental, or simple OLS regression to draw causal inference, and the remaining using primary data for descriptive purposes. Around 49 percent are theoretical or conceptual papers (and include books and reports). The rest are reviews.

About 25 percent of the studies examined a country in South Asia, 23 percent focused on sub-Saharan Africa, and 15 percent focused on Latin America. Thirty-five percent of the studies did not focus on any particular country or region. Since the Ashley et al. review covered DFID countries only, it is not possible to compare whether country and regional focus of research has changed since 2014.

Figure 1. Among newer causal inference studies, there is a relative increase in experimental and value-added models 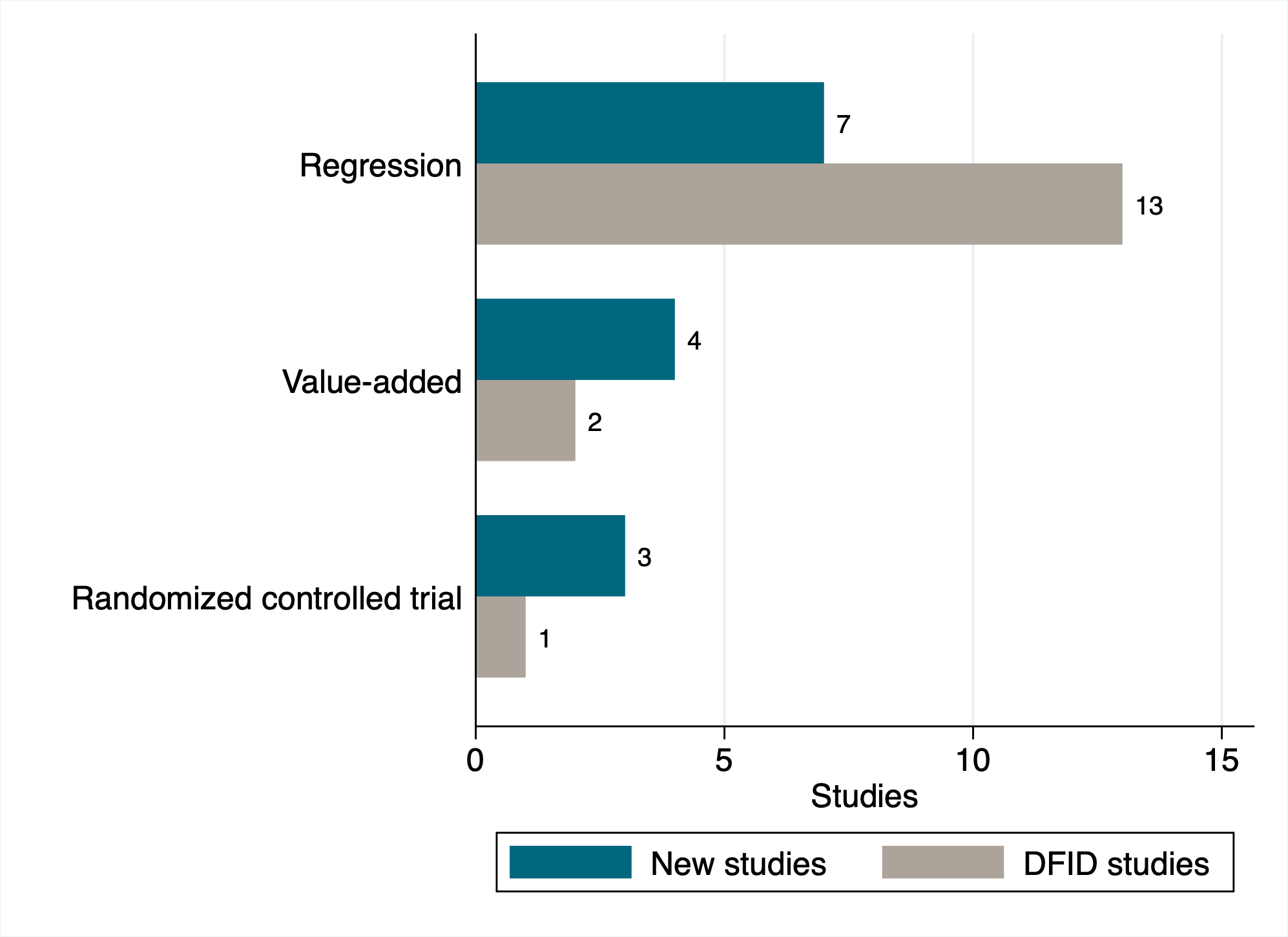 Note: The original review included only studies from DFID focus countries. Our review covers all developing countries, but only two studies in Figure 1 are not from DFID focus countries—a value-added study from Peru and a regression study from Madagascar. “Regression” includes all studies  with control variables but not lagged student test scores—this includes some propensity score matching and fixed-effect models.

Whether positive or not, the size of the difference between private and public schools is small

The 2014 review found “moderate evidence” that children in private schools learn more than their peers in government schools. Things haven’t changed much since then. Seven studies show some positive effects, and five show no difference. In addition, unpublished CGD analysis (Figure 2 below) shows a comparison of observational estimates across a wide range of countries. The effect of private schools drops sharply after controlling for family background, and equivalently important unobservable factors. But what really matters is the real-world size of these impacts, which are small. 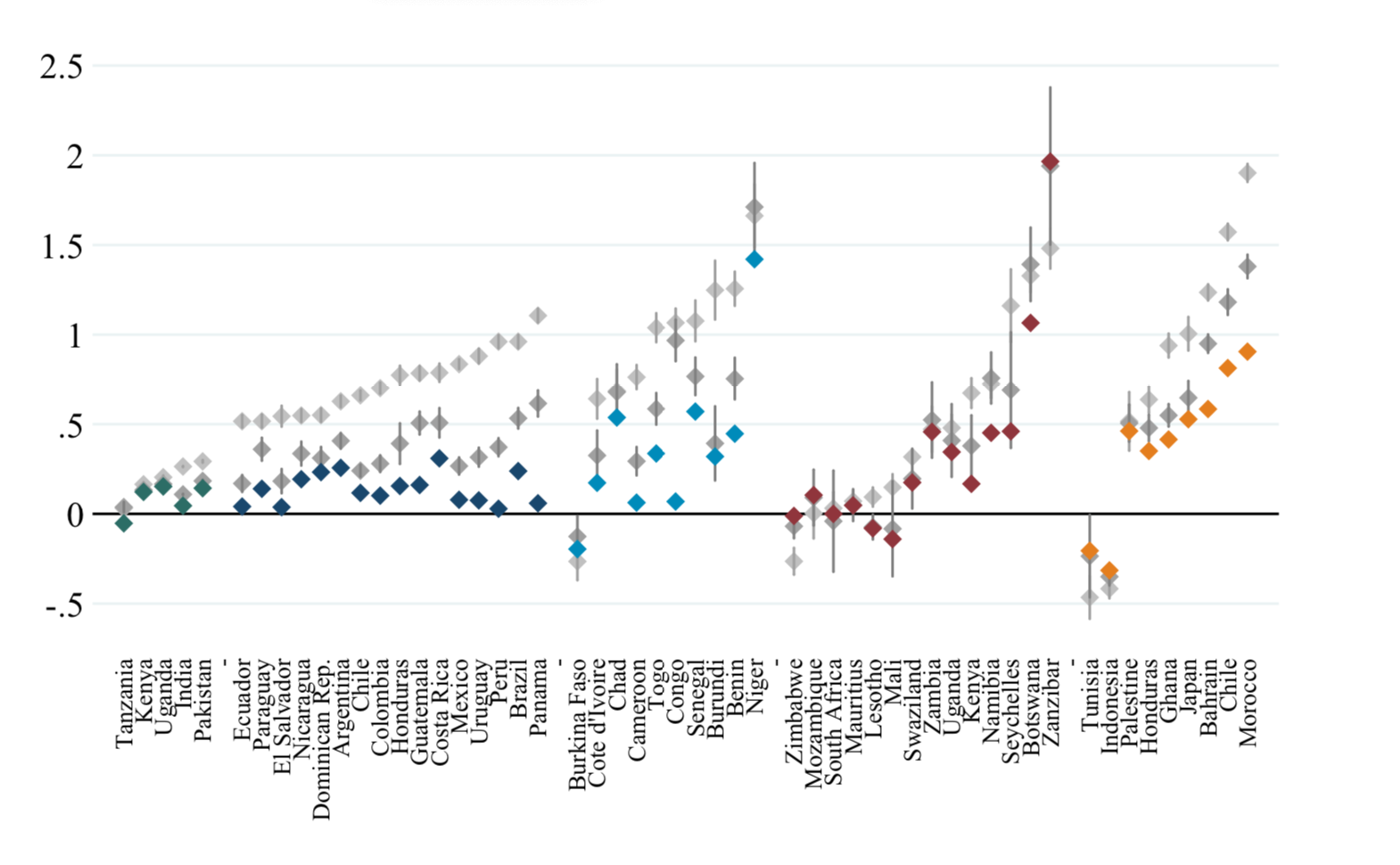 Five studies show no or very little difference between learning in private and public schools. Two papers report on a randomized controlled trial in Delhi: Dixon et al (2019) find positive impacts on English but negative impacts on Hindi after four years of private schooling, and a follow-up by Crawfurd, Patel, and Sandefur (2019) after six years finds that the positive impact on English is no longer statistically significant and the negative effects on Hindi have strengthened. This may be explained by differing effects for different students, with some positive private school effect remaining for those mostly likely to have otherwise attended a government school. Two papers use value-added models to show that students make no more progress in private schools than public schools: Piper, Ong’ele & Zuilkowski, 2020 in Kenya and Godstime Eigbiremolen et al. 2019 in Peru. Using PISA data, Sakellariou (2016) finds public and private schools achieve equivalent mathematics results in most of the 40 countries analyzed (including Argentina, Brazil, Chile, Colombia, Costa Rica, Mexico, Peru, Uruguay, Indonesia, and Jordan).

But how are big are all of these effects? Alcott and Rose (2017) are one of the few papers to report outcomes not in standard deviations but on a more tangible scale. Overall, children who attended private school were 6–8 percentage points more likely to have learnt ‘the basics’—defined as being able to read a paragraph and do basic multiplication—by the end of primary school. This still leaves a large share of students, particularly poorer ones, unable to complete the basics. In Liberia, a 0.3 standard deviation impact of contracting school management out to private providers is equivalent to being able to read around 5 more words per minute (Romero et al., 2017). In Delhi, where a negative effect on learning was found, a 0.09 standard deviation reduction in test scores due to winning a voucher was equivalent to being able to read 4 fewer words per minute—compared to an average of 47 words (forthcoming by Crawfurd et al.). These are not life-changing differences.

Ultimately then what matters is not whether the balance of studies falls one way or the other, but that even where results are positive, the absolute level of learning is still woefully low. And it is the responsibility of governments to ensure that all children learn something, whether they attend a public or private school.

Perhaps the most serious concerns about private schooling in the developing world are unrelated to any learning differentials between public and private schools, but about whether private schools exacerbate gaps between rich and poor and increase socio-economic segregation. The Ashley et al. review found weak and inconclusive evidence about equity, accessibility, and affordability of private schools for poor children. The authors did however find rigorous evidence in some contexts—particularly in India and Pakistan—that boys are more likely to attend private schools than girls.

We found seven studies that focus on the geographical and financial accessibility of private schools for children from poorer households. Raju, Ngyuyen and Nguyen (2014) show that private schools are geographically concentrated in Pakistan, with just a few districts mainly in northern Punjab accounting for most of the private school students. While one third of all students attend private schools, they tend to come from urban, wealthier, and more educated households. Another study (Siddiqi, 2016) from Pakistan shows that segregation by poverty is higher in the private sector compared to government schools. In rural Nigeria, Joanna Härmä finds that fewer than 5 percent of children in the poorest 40 percent of the population attend private school.

Srivastava and Noronha (2017) study household costs under India’s Right to Education Act (which is intended to cover the cost of going to private school for children from disadvantaged backgrounds) in one Delhi slum and find very low instances of children with free access to private schools. Those children who did have “free” private school seats nevertheless incurred high costs of accessing schooling. Similarly, in Kenya, Zuilkowski et al. (2017) find that fees charged by “low-cost private schools” are often a heavy burden on poor families. Baum, Abdul-Hamid and Wesley (2018) show that while the private education market has helped expand access to schooling in Lagos, access to higher-quality education services in the private sector is primarily available only to students from the upper ends of the income distribution.  Similarly, Endoe (2018) shows that while low-cost private schools are largely attended by children from poor households, they offer little in terms of learning achievement.

Finally, unpublished CGD analysis examines which kids are attending private schools using PASEC, ASER, SACMEQ and LLECE data. While the definition of a private school is sometimes context specific (in other words, it might mean something different in Cameroon versus Paraguay), Figure 3 shows that, with a few exceptions, very few children in the poorest economic quintile are enrolled in private schools. 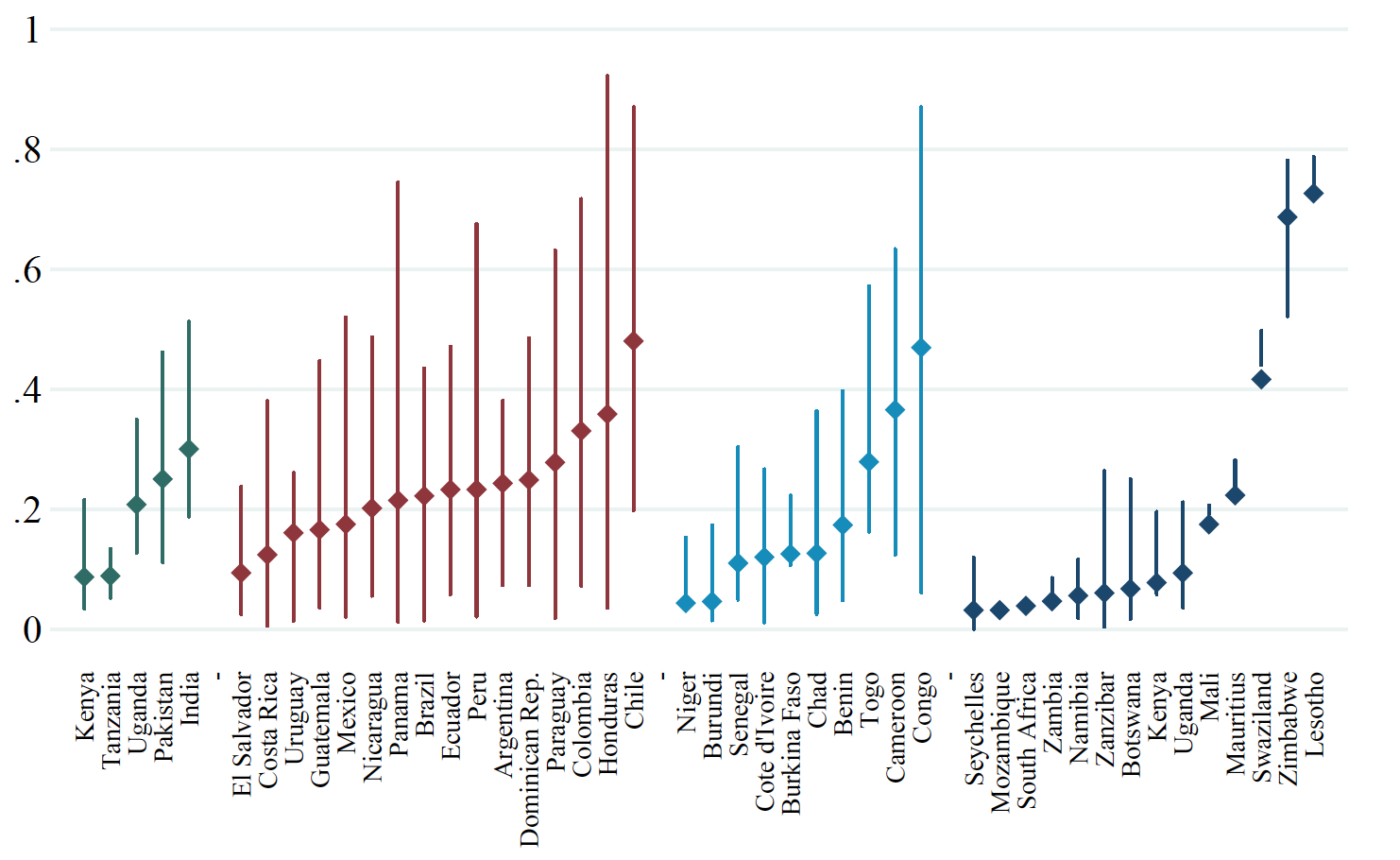 Apart from geographical and financial accessibility concerns related to private schools, there are also concerns about whether private schools are equally accessible for both boys and girls. A study by Datta and Kingdon (2019) shows that households practice gender bias by exercising pro-male private school enrollment decisions. If we believe that private schools provide better learning, then girls’ disadvantage in terms of access to private schools is problematic for ensuring that returns to schooling are truly equitable.

Does any of this settle the debate one way or another?

Private schools work better in some places for some children. They do not work better everywhere and for everyone. The Ashley et al. review suggested that private schools have better learning outcomes, but their causal effect is unclear due to inadequate controls for family background. From our quick scan, we suggest the more recent evidence reinforces that conclusion.  More importantly, any difference between public and private schools is marginal at best and learning outcomes across both sectors are woefully low.

Ashley et al. suggested private schools have a neutral or negative effect, based on evidence largely classified as weak. We tend to agree. We found that the recent evidence on equity is relatively small and largely draws from descriptive studies. As things stand, there is not sufficient evidence to suggest that the private sector is a viable route to reach the poorest children.

In short, we’re not going to say we think private schools are worse or better than public schools, but we see the evidence base as a broadly similar to what it was back in 2014. While an updated, rigorous review might be valuable for donors and policymakers, it is not clear that there is ever going to be (or indeed ever should be) a winner. Millions of kids—including some very poor kids—are enrolled in low-cost private schools and so it makes sense to investigate how to make those schools better. But the greatest efforts surely must be invested in improving public schools, where the vast majority of kids are enrolled, to support them to deliver on education’s promise to build a more equal and more prosperous society.

With thanks to Professor Pauline Rose, Jack Rossiter and Justin Sandefur for their comments.