What Have We Learned from Expenditure Conditionality in IMF Programs? | Center for Global Development | Ideas to Action Skip to main content

What Have We Learned from Expenditure Conditionality in IMF Programs?

There are many reasons why countries borrow from the IMF. For example, they borrow when they are faced with a sudden drop in prices of their exports or because they have large, persistent gaps between expenditures and revenues and/or have followed a lax monetary policy that results in capital flows out of the country and a loss in foreign exchange reserves. IMF lending provides countries breathing room to implement policies to restore the conditions necessary for durable growth.

As part of a loan agreement with the IMF, a country typically commits implementing certain policies—known as policy conditions. These conditions cover, among other things, the amount of funds a government could borrow from domestic banks and maintaining international reserves equaling certain months of imports. They also cover “structural” measures, meaning reforming policies that affect the functioning of the government. Structural measures include strengthening public financial management, and improving social safety nets. Conditions pertaining to the budget (covering both revenues and expenditures) are invariably present in IMF programs.

The long-term impact of IMF expenditure conditionality is more substantive than in the medium term, particularly for measures that are structural in nature. My conclusion is derived from a study of expenditure conditionality in IMF programs between 1992 and 2016, carried out with Michela Schena and Seyed Reza Yousefi. The data are drawn from 106 emerging market (EM) and low-income developing countries (LIDCs) that had at least one IMF program during the sample period. (Note that we did not include advanced economies in our study because of their small number and institutional differences from emerging and low-income developing economies.)

As the left panel of figure 1 shows, the number of IMF programs peaked in the 1990s with the breakup of the Soviet Union and the Asian financial crisis. Expenditure conditionality has increased in the last decade (right panel of figure 1) which includes conditions on key expenditure components (what is the minimum that a country should spend on education, health, and public investment and how much to spend on hiring public employees) as well as on public financial management reforms (clearing expenditure arrears, strengthening accounting and financial reporting of the budget). The fulfilment of structural expenditure conditionality is not a precondition for the continuation of the IMF program. 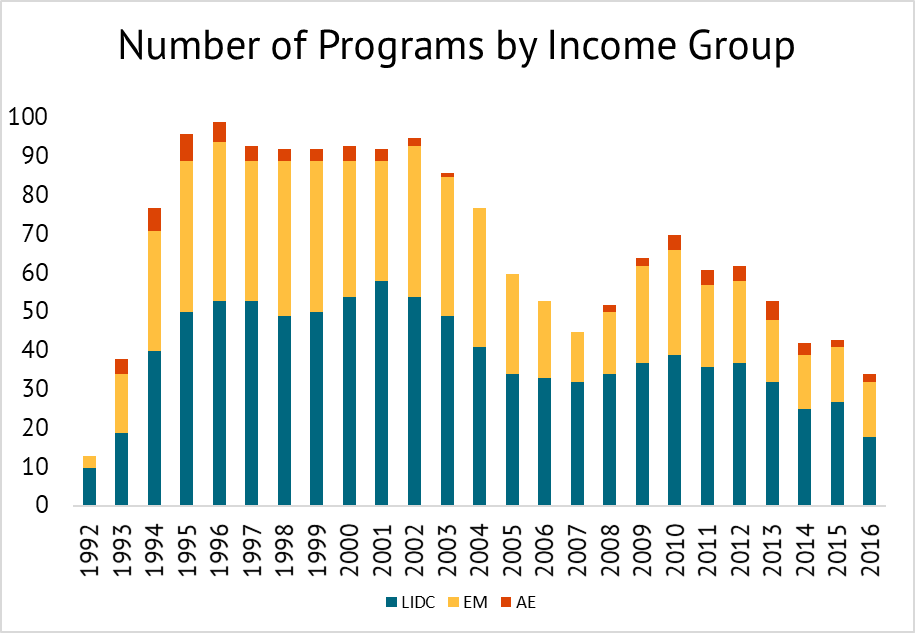 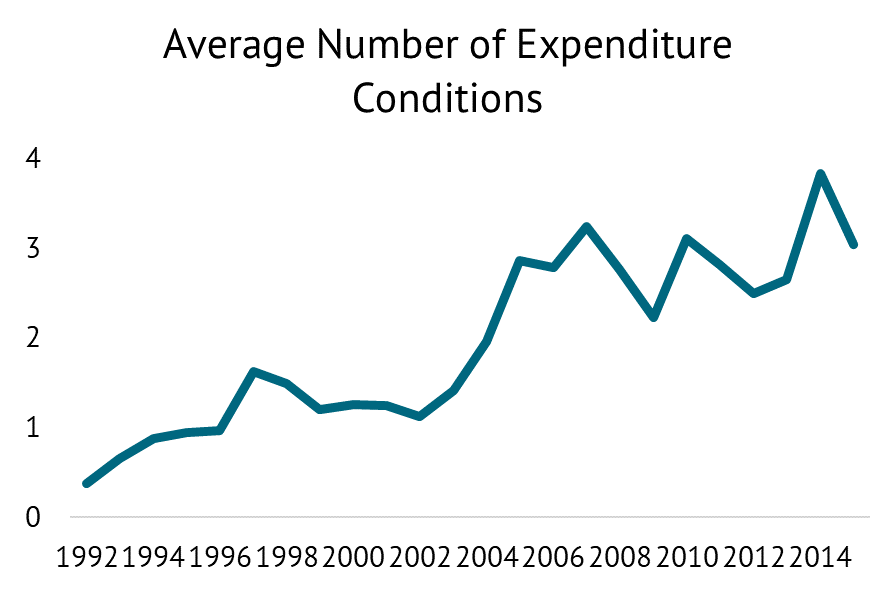 LIDCs have the largest number of expenditure conditions on average, followed by the emerging markets (EM) and advanced economies (AE) (Figure 2). 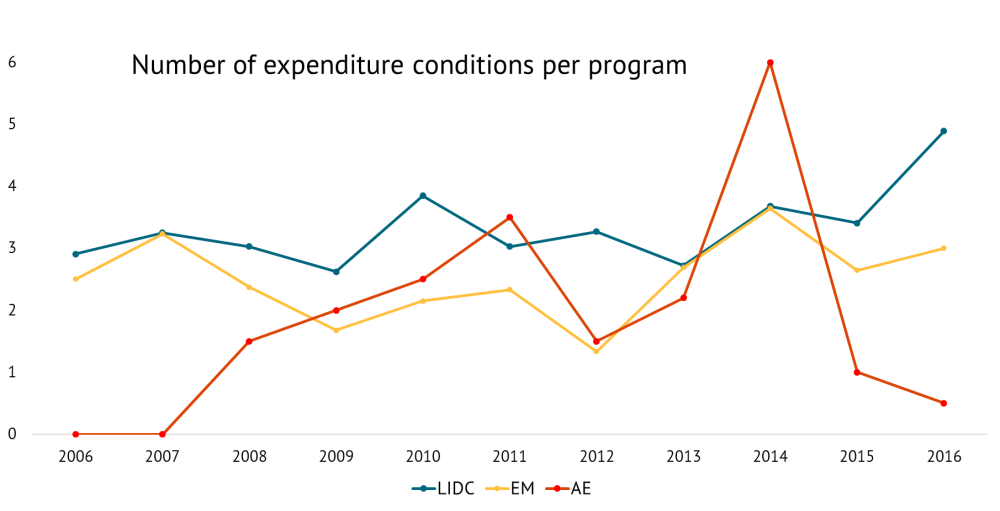 The effects of specific conditionality on education and health spending in IMF programs have been widely debated in the literature: what is the right balance between fiscal austerity and growth-enhancing and social policies? Critics have argued that IMF programs have failed to deliver desired increases in social sector spending and that IMF conditionality has reduced fiscal space for health spending in Africa. Others have countered that IMF programs can potentially increase social spending through three channels: higher growth during the program period which raises domestic revenues, safeguards in programs that protect social spending from austerity measures, and catalyzing foreign aid and investment during the program period that increases overall fiscal space. This means that education and health expenditures increase at a faster pace in countries with an IMF program than in economies without one. Some of the studies have overlooked these channels with a beneficial impact of an IMF program on fiscal space and have relied overly on a qualitative methodology.

What does the empirical analysis show?

A number of noteworthy findings emerge.

First, the mere existence of expenditure conditionality in an IMF program does not lead to improved outcomes; its successful implementation is crucial.

Second, conditionality on social spending in the form of safeguards/ or floors appears ineffective in the medium term. In contrast, structural conditionality (such as conditions on arrears payment or accounting and financial reporting) has a lasting impact on increasing social spending. For instance, such improvements have helped countries raise the share of education expenditures in the total by about 0.9-2.0 percent in the long run.

Third, implementation of structural conditionality has further helped spur public investment. In an emerging economy, public investment increased by between 10 and 19 percent in the long term.

First, while spending floors on health, education or public investment may help countries with IMF programs achieve the short-term objective of protecting spending in the context of budget discussions, structural conditionality is most effective over the longer term in improving the composition of government spending by increasing the share of growth-friendly and poverty-reducing spending on health and education.

Second, the above results are particularly relevant for low-income countries where the level of social and investment spending needs to be scaled up considerably to achieve the Sustainable Development Goals.