Aid to Pakistan by the Numbers

The data on this page was last updated September 2013. Read the related blog post here.

What the United States spends in Pakistan

The United States began providing economic assistance along and military aid to Pakistan shortly after the country’s creation in 1947. In total, the United States obligated nearly $67 billion (in constant 2011 dollars) to Pakistan between 1951 and 2011. The levels year to year have waxed and waned for decades as US geopolitical interests in the region have shifted. Peaks in aid have followed years of neglect. In several periods, including as recently as the 1990s, US halted aid entirely and shut the doors of the USAID offices. This pattern has rendered the United States a far cry from a reliable and unwavering partner to Pakistan over the years.

History of US Obligations to Pakistan, millions US$(2011) 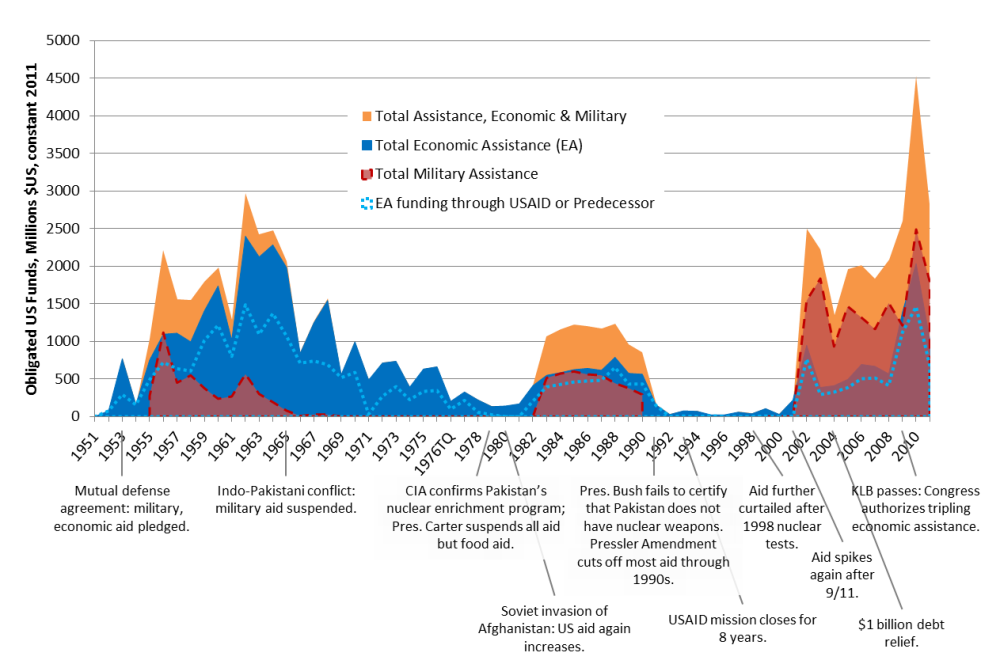 Source: US Overseas Loans and Grants: Obligations and Loan Authorizations (aka the Greenbook). For the years 2002–2011 we have added data on Coalition Support Funds spending to the military assistance category; while CSF is not technically foreign assistance, it has constituted the bulk of military assistance to Pakistan during the post-9/11 period. Source for CSF amounts is "Direct Overt U.S. Aid Appropriations and Military Reimbursements to Pakistan," prepared for the Congressional Research Service by K. Alan Kronstadt.

In 2009, in an attempt to signal the United States’ renewed commitment to Pakistan, the US Congress approved the Enhanced Partnership for Pakistan Act (commonly known as the Kerry-Lugar-Berman bill, or KLB). KLB’s intention was to put security and development on two separate tracks, insulating the development agenda from unpredictable geopolitical and military events and facilitating longer-term planning for development. The act authorized a tripling of US economic and development-related assistance to Pakistan, or $7.5 billion over five years (FY2010 to FY2014), to improve Pakistan’s governance, support its economic growth, and invest in its people.

Even with strong authorizing language, however, it is up to the administration to request the funds and up to the Congressional appropriations committees to approve those requests. As quantified in a recent Congressional Research Service report by Susan Epstein and Alan Kronstadt, in only one of the first four years of KLB’s five-year authorization did the final appropriation for US economic-related aid to Pakistan meet or exceed the average annual authorization of $1.5 billion.

Source: Table 2, “Pakistan: U.S. Foreign Assistance” by Susan Epstein and Alan Kronstadt, CRS, July 2013. While the Department of State has classified the above accounts as economic-related assistance, we (and others including CRS) would classify INCLE and NADR as security-related assistance.

How Has US Assistance Been Allocated in Recent Years?

Between FY2002 and FY2009, only 30 percent of US foreign assistance to Pakistan was appropriated for economic-related needs; the remaining 70 percent was allocated to security-related assistance. In the period since the KLB authorization (FY2010 through the FY2014 budget request), 41 percent of assistance has been allocated for economic-related assistance —still not a majority of total assistance, but the increase over the preceding period does demonstrate the renewed commitment to Pakistan’s development embodied by the legislation.

Annual Appropriations, US Assistance to Pakistan FY 2002-2014 (Millions Current US $) 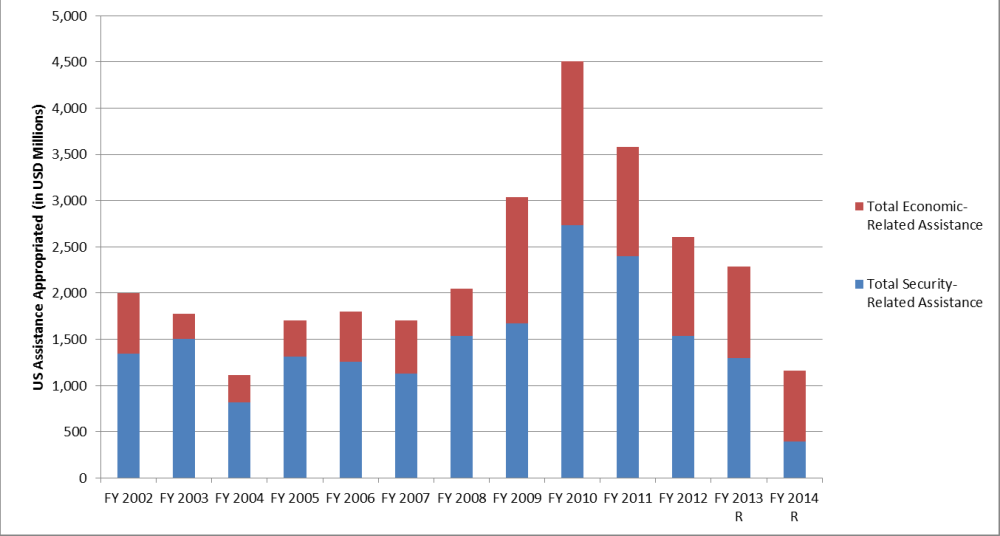 The following chart utilizes data from the US Foreign Assistance Dashboard, currently under construction, which intends to become the one-stop-shop for all data about US foreign assistance. It shows how funds designated for economic-assistance to Pakistan ($766 million requested in FY2014) have been allocated across sectors.  Because we are most interested in what we consider to be development-related assistance - the programs that represent an investment in Pakistan's longer term economic development - we have removed the sectors "Peace and Security" and "Humanitarian Assistance" for this chart.  Further details about the spending breakdown in each sector are available on the US Foreign Assistance Dashboard.

US Development-Related Assistance to Pakistan: Planned Spending by Sector (Millions Current US $)

Source: US Foreign Assistance Dashboard, Accessed July 2013. Figures represent ‘Planned Spending’ for Pakistan for all sectors and all reporting agencies. We have removed the categories “Peace and Security” and “Humanitarian Assistance” in an attempt to reflect only longer term, development-related assistance.  Also note that at the time of this publication the Foreign Assistance dashboard over-reported Health spending, but we have confirmed that the figures shown below are correct.

How Has US Assistance Funding Been Spent?

While the figures above show how officials planned to spend foreign assistance funds in Pakistan, actually disbursing the funds has proven to be a significant challenge. The limited capacity of local partners, legitimate concerns about corruption and security, a hesitation to deploy aid in the absence of necessary systemic reforms—for example in the energy sector—and the disruption to programmed assistance inflicted by natural disasters such as the 2010 floods have all contributed to difficulty in spending money.

In addition to challenges spending the money, as CGD staff have written in the past, it is difficult to know just how much money has been spent. According to figures in the most recent CRS report, between FY2010 and FY2012 approximately $2.2 billion of $4 billion appropriated for economic-related assistance was disbursed (including security-related assistance, just over $3 billion was disbursed in this time period).

A final source, probably the most accurate and certainly the most up to date, is the Quarterly Progress and Oversight Report on the Civilian Assistance Program in Pakistan, produced by the Office of the USAID Inspector General. According to the report, as of March 31, 2013, nearly $4 billion in civilian assistance funds for FY2010 through FY2013 had been obligated, and just over $3.5 billion had been spent. Using our categorization scheme where we classify ESF, GHCS, and the HR and Democracy Fund as development-related assistance, $2.6 billion in development-related assistance has been obligated and $2.3 billion spent.

How Do Assistance Levels to Pakistan Compare to Assistance to Other Initiatives and Countries?

The president’s FY2014 budget request marks a significant decline in assistance to Pakistan and the other frontline states of Afghanistan and Iraq. It also transfers the majority of assistance out of the Overseas Contingency Operations (OCO) component, created for the temporary and extraordinary resources required for frontline states, and into Enduring/Core Programs.

Despite this decline, the amount of US aid pledged to Pakistan remains significant compared to funding for other development initiatives. The administration’s $1.16 billion request for foreign assistance to Pakistan exceeds requests for the Global Hunger and Food Security initiative ($1.06 billion), the Millennium Challenge Corporation ($0.90 billion), and the Global Climate Change initiative ($0.48 billion). It is also not far behind the requested $1.36 billion for the World Bank’s International Development Association (IDA), which makes loans and grants to the world’s 81 poorest countries and is the single largest source of development finance in these locations. As for bilateral assistance, according to the most recent data from USAID’s US Overseas Loans and Grants database (FY2011), Pakistan is the fourth largest recipient of US assistance, trailing Israel, Afghanistan, and Egypt. As a point of comparison, the United States has pledged seven times more aid to Pakistan than to Bangladesh, a neighboring country with a comparable population size and similar development needs.

Source: US Overseas Loans and Grants, aka the Greenbook, denominated in 2011 constant US $. Note that this dataset excludes military reimbursements through the Coalition Support Fund, which have been appropriated for Pakistan at an average of $1.1 billion per year under KLB.

It’s Not All About the US: Other Donors’ Contributions to Pakistan

Of course, the United States is just one of many countries and institutions that provide financial assistance to Pakistan.  The following chart puts the United States’ contributions in context by quantifying each donor’s share of gross Official Development Assistance (ODA) that flowed into Pakistan in 2011.  Total gross disbursements amounted to $4.15 billion (constant 2011 $).  The United States was the largest contributor, constituting nearly a third of total ODA to Pakistan, and is followed by the World Bank’s International Development Association (21 percent of total ODA), Japan (14 percent), the United Kingdom (8 percent), and the EU Institutions (4 percent).

Source: OECD Creditor Reporting System, Table DAC2a, accessed July 2013. Total includes Gross Disbursements of Official Development Assistance, All Sectors and Aid Types, and Channels, denominated in 2011 constant US $. Note these OECD CRS figures exclude major non-DAC donors except for Kuwait and the United Arab Emirates, which are included.  According to reports from the State Bank of Pakistan, in 2012 China pledged assistance (largely loans) to the amount of $850 million.

As for the multilateral institutions, the Asian Development Bank (ADB) is Pakistan’s biggest multilateral partner, providing assistance of $4.4 billion from 2009 through 2012.  Under its 2009-2013 Pakistan Country Strategy the ADB increased support for the energy, transport and irrigation infrastructure, and urban services sectors, providing annual average lending of almost $1.5 billion.

The World Bank’s portfolio in Pakistan currently consists of 30 projects with a total commitment of $5 billion.  The Bank is heavily invested in the education sector (in Punjab, Sindh, and Balochistan) and infrastructure (transport, sanitation, water management, and energy).

The IMF disbursed credit worth $5.2 billion to Pakistan from FY2008 to FY2010 following the 2008 economic crises. In 2011 the Government of Pakistan decided to end the IMF program, but following the country’s civilian election in May 2013 the new government, led by the Pakistani Muslim League (Nawaz), has entered into a new provisional agreement with the Fund worth $6.6 billion for a bailout package for FY2013-2016. Although the IMF and Pakistan have an ‘unhappy history’, the new government is said to have little choice due to its balance of payments crisis and sharply declining foreign exchange reserves.

For more information and detailed data on donor flows to Pakistan, see the State Bank of Pakistan’s annual reports and its economic data.