The EU’s New Budget: Europe’s Recovery at The Expense of Its Long- Term Ambitions

After a four day marathon run of negotiations, the 27 Head of States of the European Union (EU) reached an agreement on both the Recovery Fund—a large fund to support the post-COVID recovery across the EU—and its new long-term budget and priorities, the Multiannual Financial Framework (MFF) 2021-2027. While leaders across the EU are now hailing the deal as a “win” for their own voters and priorities, inevitably the negotiations were fundamentally driven by domestic interests and priorities, and predictably, international development has suffered as a result of the cuts. In our previous blog, we set out the European Commission’s proposals for the Recovery Fund and spelled out what they meant for Europe’s role on the international stage. Here, we look at what has now been agreed and what it means for the EU’s ambitions to be a leading global actor.

What has been agreed?

The Recovery Fund, or as it is known in EU speak, Next Generation EU (NGEU)—a new instrument worth €750 billion to support Europe’s post-COVID recovery—has been hailed as a major breakthrough for the EU. Worth €390 billion in grants and €360 billion in loans, most of this money will support hard-hit regions, especially in southern Europe. Characterised as a “rapid response”, the money will be distributed over three years between 2021 and 2023. While the proportion of grants is lower than originally proposed by the Commission, there is no doubt that this is a game-changing moment for the EU as it embarks on large-scale capital market borrowing, something that seemed unimaginable not too long ago.

Alongside the Recovery Fund, the European Council unanimously agreed on the new seven-year budget (MFF) which will shape the EU’s long-term priorities. With an overall ceiling of €1.074tn, it is slightly lower than the ceiling for the MFF 2014-2020 (all referenced numbers are in 2018 prices, see Figure 1). 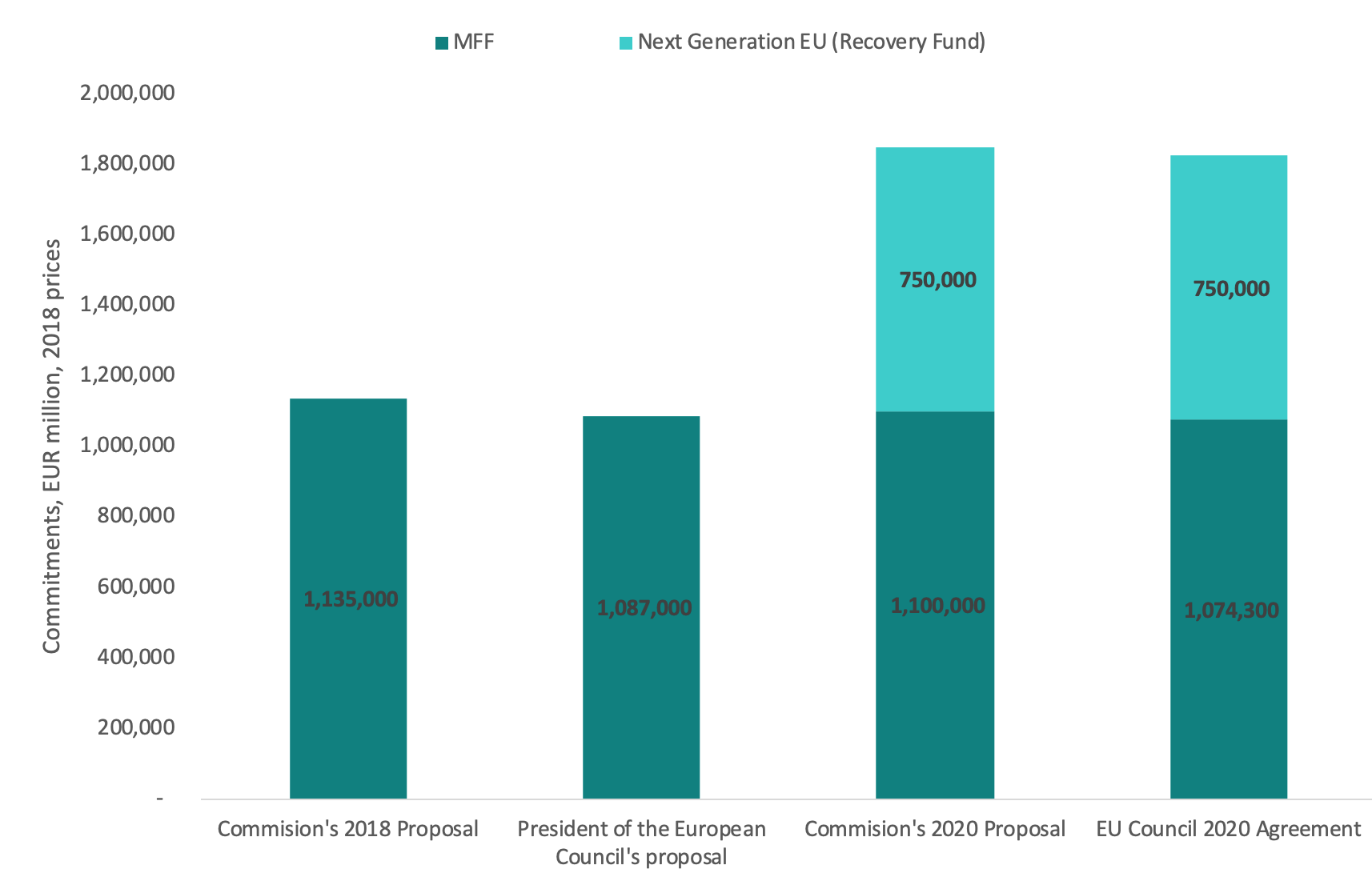 Nevertheless, the proportion of the overall budget spent on external action has slightly increased in comparison to the current budget: While 8.9 percent in the 2014-2020 MFF was dedicated to external action, its share has now increased to 9.2 percent in the European Council agreement. However, this is still lower than the 9.6 percent set out in the ambitious 2018 European Commission proposal. This slight percentage increase in the overall external action budget does however mask a change of direction in the EU’s global priorities, which becomes clear if we look in detail at the proposed allocations. Furthermore, while in this blog, we mainly analyse the EU28 commitments in the 2014-2020 MFF, it is interesting to note that if we scale these contributions by the existing EU 27 (without the UK), the development budget has, in fact, been cut by €2.3bn.

What does the MFF tell us about the EU as a global actor?

While the fraught negotiations finally led to an agreement that can be regarded as a balanced compromise between the interests of north and south, east and west, EU leaders have clearly tempered their global ambitions by slashing spending beyond Europe’s borders. The so-called Heading 6: “Neighbourhood and the World” has been cut from the €118bn proposed by the Commission in May to €98bn (see Figure 2). And the €98bn is only slightly higher than the ceiling for the MFF 2014-2020. 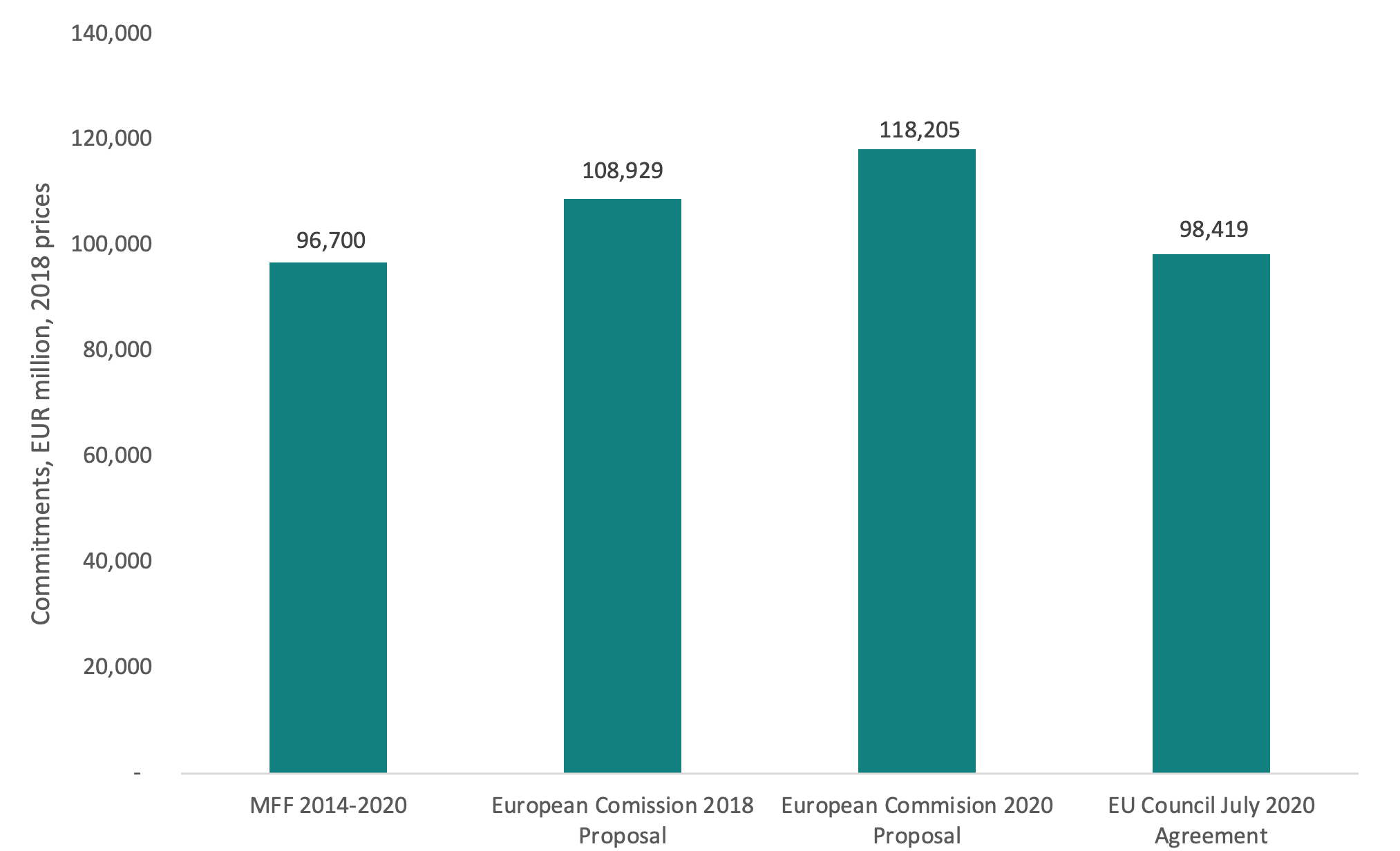 The primary instrument for international development, the “Neighbourhood, Development and International Cooperation Instrument” (NDICI) —which merges and simplifies an array of instruments for external action under the previous MFF—has taken a hit, significantly reduced from €79.2bn (EC 2018 proposals) to €70.8bn. It has also lost out on any funding from the Recovery Fund, which goes against the Commission’s proposals in May in which a top-up of €10.5bn was planned for the NDICI. While the humanitarian aid budget remains at the level proposed by the Commission in May at €9.76bn, it too lost out on the additional top-up of €5bn from the Recovery Fund.

Given this significantly reduced external action budget, there is no doubt that the current European Commission will find it much harder to live up to its own ambition for leadership on the international stage. Von der Leyen’s hailed “geopolitical Commission’s” priorities seem to lie much closer to home than the term “geopolitical” suggests. Sub-Saharan Africa has been earmarked a budget of €26bn, the same amount set aside under the current MFF. The budget for the European Neighbourhood (in particular, the Ukraine, the Middle East, North Africa, and the Caucasus) has also been cut from the Commission’s proposed €19.5bn, but nevertheless increased by €2bn compared to the current MFF; a clear signal of the geopolitical and strategic importance of the region for the EU. The budget for pre-accession countries (in particular, Turkey and the western Balkans) sees an almost €1bn increase from the current MFF; a signal that enlargement for the western Balkans is back on the EU’s table. And the humanitarian aid budget has been spared any cuts, in recognition of the massive adverse humanitarian effects brought about by the COVID-19 pandemic.

Figure 3. Comparison of external action budget allocation between MFF 2014-2020, European Commission 2018 proposal for the MFF 2021-2027 and the European Council agreement in July 2020 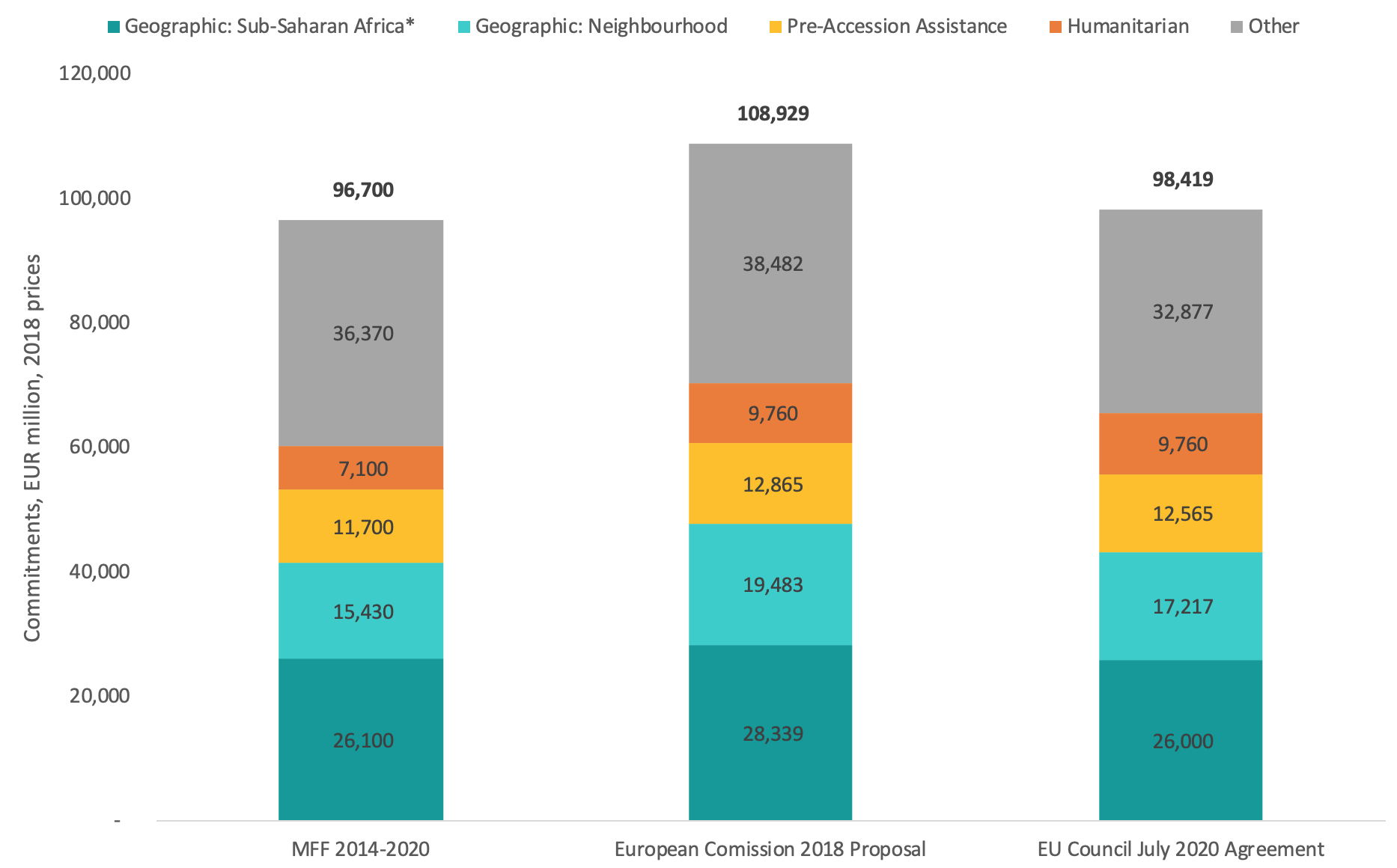 Also significantly reduced is the budget on migration and border management, which is entirely inconsistent with the priorities that the EU has set over the past few years. While the EU spent €8.9bn under the 2014-2020 MFF, the 2018 proposals for the MFF 2021-2027 anticipated a whopping increase to €30.8bn. The current proposals have cut back spending under Heading 4: “Migration and Border Management” to a total of €22.7, with the Asylum and Migration Fund reduced to 8.7bn and the Integrated Border Management Fund cut to €5.5bn.

While EU leaders were aiming to save the bloc’s economy from the COVID-19 plunge, they did this at the expense of spending on other long-term public policies and global public goods. Dramatic cuts were made to the Commission’s May 2020 proposals, in particular on research and innovation, health, and climate action. On health, while the European Council accepted the Commission’s proposal to establish a stand-alone health programme worth nearly €1.7bn under the MFF, the extra €7.7bn money from the Recovery Fund as requested by the Commission in May 2020 was blown out of the water. Commission President von der Leyen’s flagship Just Transition Fund (JTF), to support affected workers, sectors and regions with the transition to a greener economy, was cut from €40bn to a mere €17.5bn. No longer will the Green Deal be, in von der Leyen’s words, “the motor of our recovery.” And in a major blow to the EU’s ambition to be a R&D superpower, Horizon Europe—the EU’s main research and innovation program—was cut too. Before the summit, the Commission budget foresaw an €80.9 billion contribution from the MFF and a €13.5 billion boost from the Recovery Fund for Horizon Europe. In last week’s Council agreement, the latter figure was reduced to €5 billion, while the contribution from the MFF was limited to €75.9 billion.

It’s not all bleak though.

EU leaders did commit in theory to a green transition, by agreeing to compliance of spending under the Recovery Fund and the MFF with the 2030 emissions target, the transformation of the EIB into the climate bank and the reshaping of the Common Agriculture Policy (CAP) to make it more sustainable. And to increase the EU’s own financial resources, a levy on non-recycled plastic waste will be introduced in 2021. While these proposals are some way off the EU’s ambition to “build back better,” the EU’s stimulus package is “greener” than the recovery plans set out by some of Europe’s large economies.

Last week’s European Council agreement sent a strong signal that the EU is serious about fostering economic growth and prosperity at home, with a delicate balance between east, west, north, and south. However, with the regional divergences still pronounced and the frugal five (Austria, the Netherlands, Sweden, Denmark, and Finland) pushing for lower spending, the result has come at the cost of a much-needed modernisation of the EU budget that recognises the scale of challenges that the world faces and Europe’s own role in addressing those challenges. Once again, short-termism outflanked long-term objectives at the expense of future generations.

For international development, in particular, it is a dramatic setback, not only compared to the Commission’s original proposal in 2018, but also compared to the Commission’s proposal less than two months ago. The European Council has also severed any link between the Recovery Fund and EU external action, in turn severing the link between Europe’s recovery and the recovery of its development partners.

If the Council’s agreement is endorsed by the European Parliament, “Team Europe” will need to find a way of doing more and doing better with its development partners, but with less money at its disposal. However, the European Parliament has already expressed its opposition to many of the cuts in a resolution. Even though the resolution is non-binding, MEPs have stated that they are “prepared to withhold their consent” for the MFF. The last word on the EU’s priorities has not been spoken just yet.

The authors are grateful to Beata Cichocka for her input and representation of the data.

Blog Post
A Bank for the World: A Call to Arms on the Sidelines of...
Amanda Glassman and Eleni Smitham