Gavi, the Vaccine Alliance, pools donor funds to increase immunization rates in developing countries. Vaccines have saved millions of lives. [1] Results from new research at the Center for Global Development suggest Gavi could save more lives by shifting support away from lower-cost vaccines provided to middle-income countries toward more underused vaccines and support to the poorest countries.

Since 2000, Gavi has disbursed $5.3 billion worth of vaccines and $1.7 billion in financing to 77 countries with a combined population of 4.5 billion. [2] In 2014, Gavi shipped 169 million doses of the pentavalent vaccine (a combined vaccine against diphtheria, pertussis, tetanus [DPT], Haemophilus influenza type B [Hib], and hepatitis B [hep B]), enough to provide a full course of the vaccine to 79 percent of infants in participating countries. [3] The Alliance has also funded performance-based payments for increased DPT immunization coverage ($20 per additional infant covered), though this program was discontinued starting in 2013. The Alliance employs an income-based eligibility criterion for its support that initially excluded all countries with a per capita gross national income (GNI) in excess of $1,000 in 1998 at market exchange rates and currently excludes countries above $1,570. Countries with per capita income that crosses this threshold are no longer eligible to apply for new vaccine support, but can continue receiving support for existing vaccines for five years. During this period, countries pay an increasing share until 100 percent of vaccine costs are covered by domestic sources.

Gavi recently completed a $7.5 billion replenishment process to raise funds for the period 2016 to 2020. As part of the replenishment, Gavi is considering changes to its model, including modifying the types and targets of support. This brief builds on research presented in a companion paper (“Are Vaccines Fungible? Regression Discontinuity Evidence from a Large Aid Program”) to provide policy suggestions to help inform these discussions.

Progress on Vaccination since 2000

Vaccination coverage in poor countries has increased over the last ten years, ending the stagnation from the decade before. The DPT coverage rate in low-income countries averaged 59 percent in both 1990 and 2000, but by 2012 it had climbed to 81 percent. Over the same period, several newer immunizations became rapidly available and widely used. Figure 1 compares vaccine coverage rates in Gavi-eligible countries to a sample of higher-income Gavi-ineligible developing countries in 2000 and 2013 [4] . Hep B coverage rates in particular increased dramatically in eligible countries over that period, considerably shrinking the gap in coverage between eligible and ineligible countries. Two immunizations that were not in the standard schedule in 2000 (rotavirus and pneumococcal) had begun to roll out by 2008. 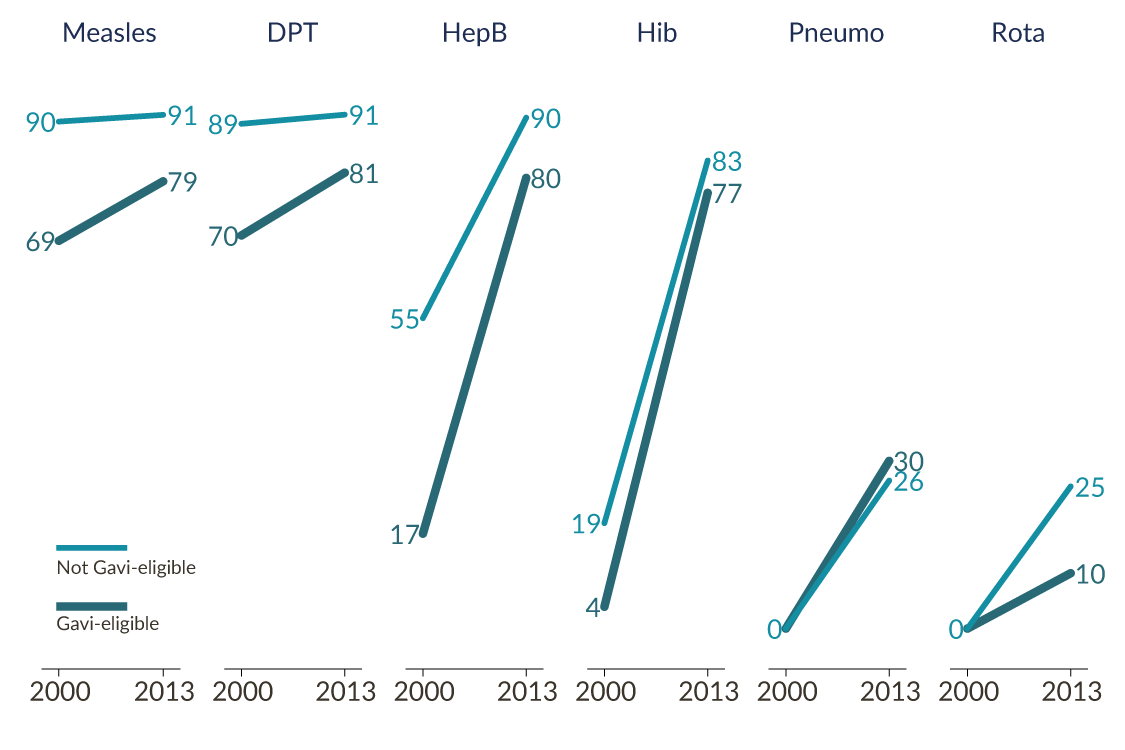 The Alliance’s large purchases combined with a specific strategy to bring new vaccines into the market grew the market for vaccines and may have contributed to a drop in vaccine prices over time. Between 2000 and 2012 the price UNICEF paid for the hep B vaccine dropped from US$ 0.55 to US$ 0.19 per dose, for example. For Gavi-ineligible countries, UNICEF purchased DPT doses for $0.17 on average in 2012, pentavalent for $2.16, rotavirus for $5, and pneumococcal doses for $7.

The very rapid adoption of hep B and Hib is consistent with a story that Gavi facilitated rollout of coverage through the provision of the pentavalent combination vaccine especially in the poorest countries.

Alongside purchasing a significant quantity of vaccines, Gavi supported the development of the pneumococcal vaccine containing serotypes prevalent in low-income countries through an advance market commitment (AMC). It’s not clear the tailored vaccine would have existed by 2010 without the Alliance’s efforts. The cost of the vaccine was capped at $7 for the first 20 percent of the supply to developing countries and $3.50 for the remainder as part of the AMC agreement.

At the same time, there is evidence that Gavi support for low-cost vaccines included as part of the pentavalent package may have displaced doses that countries would have purchased absent Gavi. Figure 2 displays 2013 GAVI funding and hep B, Hib, and DPT vaccination levels and suggests that countries just above the income cutoff, which receive no Gavi funding, are rolling out DPT and hep B as well as or better than countries just below the threshold, which do receive Gavi funding. In that sense, the vaccine aid near the threshold was “fungible”—Gavi purchased and distributed vaccines which would have been funded by countries even in the absence of its support. (Note the evidence suggests wastage is a fairly minor issue—the considerable majority of vaccines delivered by Gavi are used to immunize children.)

The story is notably different with more expensive vaccines. Delivery of a Gavi-funded rotavirus vaccine actually increases coverage by more than doses delivered, while delivery of Hib vaccines sufficient to immunize 100 percent of infants would lead to an increase in vaccination coverage of just 72 percent.

It is important to emphasize that the fungibility results for cheap vaccines are applicable only to countries near the eligibility threshold. There are good reasons to suspect free vaccines had a bigger impact on immunization rates in poorer countries with weaker vaccination programs in the absence of aid. However, some fungibility occurred even at lower income levels. In 2000, DPT coverage in eligible countries was 70 percent. For those countries which received enough pentavalent vaccines (which includes DPT) from Gavi to cover 100 percent of children, if they had not reduced their own DPT purchases from 2000 levels to zero, they would have had an average of 70 percent more doses than children to vaccinate. In other words, the choice to dedicate most Gavi funding over the past decade to the combined pentavalent vaccine essentially crowded out countries’ own spending on some of its less expensive component vaccines such as DPT. 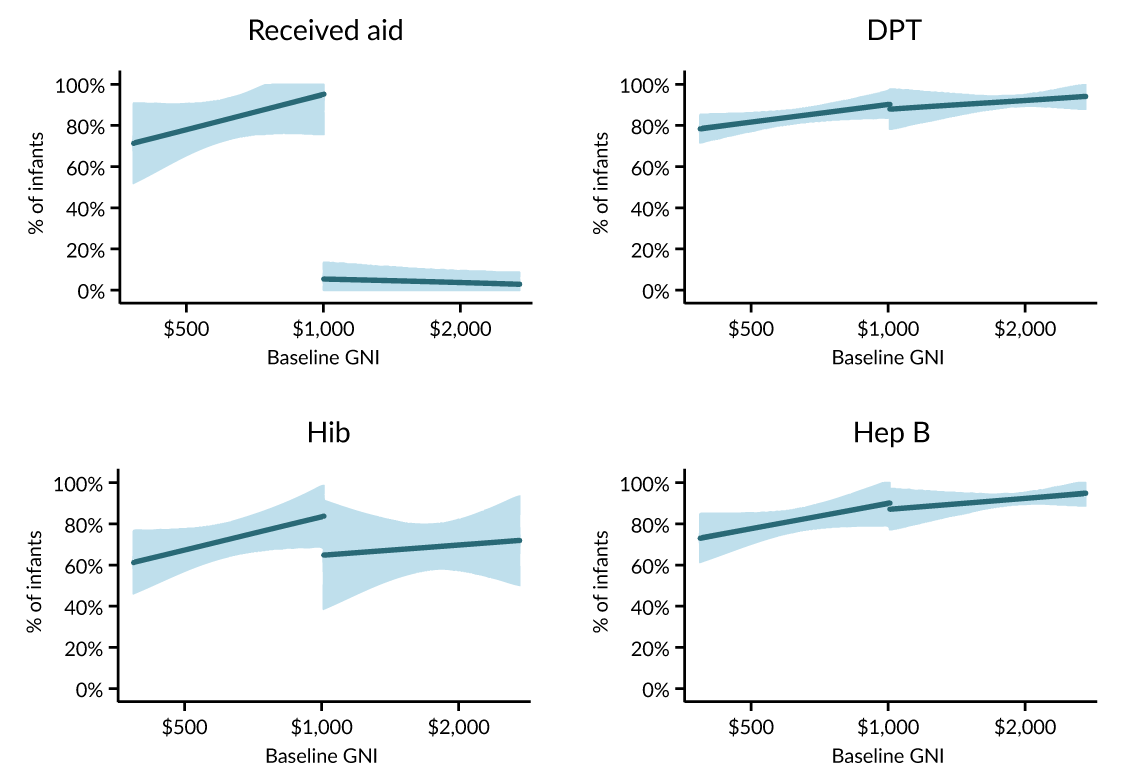 Vaccine Cost as a Barrier to Rollout

One interpretation for these results is that prices for cheap vaccines are not the major barrier to rollout at the cutoff. Studies from the late 1990s in Bangladesh, Côte d’Ivoire, and Morocco suggested total costs of $21 to $24 per fully immunized child per year. [5] Traditional vaccines account for an average of 8–29 percent of total costs compared to labor accounting for 30–46 percent of total costs. [6] Conversely, in cases where a more expensive vaccine is added to the schedule to reach those already covered by vaccination services, the vaccine cost will be the predominate source of cost growth.

There are also increasing marginal costs in reaching children through the vaccine supply network. Mobile vaccination strategies that bring vaccines closer to children cost $26 per fully immunized child compared to facilities-based approaches (that bring children to permanent clinics) of $14—but countries are unlikely to get to 90 percent coverage or more without using mobile strategies. [7] And covering the “last mile” will take a focus not just on extending access to vaccines, but making sure parents bring their children to get immunized. Using incentive rewards and improved access to vaccination camps increased vaccine coverage in Rajasthan, India, for example, but at a combined cost of about $28 per fully immunized child. [8] Newer forthcoming studies on vaccine delivery costs suggest even higher per-child costs. [9]

This implies that in some cases, the $20 in performance-based financing provided by Gavi for increased immunization coverage may have been well below the marginal cost of extending that coverage. And the cost of vaccines themselves is likely to be the major barrier to rollout only in the case of comparatively expensive vaccines.

It is perhaps unsurprising that a single threshold for support may not lead to the most cost-effective spending across the board. This suggests the considerable value in ongoing discussions within Gavi about modifying policies regarding the threshold and the selection of candidate vaccines for subsidy. The Alliance might consider the options presented below in Table 1 (which also shows current financing levels):

Table 1: What Should Gavi Do?

[3] Authors’ calculations using UNICEF’s data on Gavi shipments in 2014 and World Bank population estimates in 2013, the most recent year of data available in the World Bank’s Databank. Both Gavi-financed and cofinanced shipments were included.

[4] The ineligible sample is made up of the 73 developing countries in order of increasing income from above the GNI cutoff.

[9] G. Gotsadze, K. Goguadze, I. Chikovani, and D. Maceira, “Analyses of Costs and Financing of the Routine Immunization Program and New Vaccine Introduction in the Republic of Moldova,” Curatio International Foundation, 2013.