And Then There Were None? Banks Are De-Banking on a Grand Scale | Center for Global Development | Ideas to Action Skip to main content

And Then There Were None? Banks Are De-Banking on a Grand Scale

In a few weeks’ time Australia’s Westpac bank will start closing down the accounts of money transfer organizations used by immigrants to send money home. Westpac is the last major Australian bank still offering services to organizations in the country’s US$25bn remittance sector.

Two weeks ago, Merchant’s Bank of California also decided to close the accounts of all money transfer organizations (MTOs) sending money to Somalia. The source of Merchant’s decision appears to have been a cease-and-desist order issued by the Office of the Comptroller of Currency (OCC) in June, purportedly due to the bank’s failure to appropriately monitor the destination of remitted funds.

Unfortunately, we’re seeing a trend here.  In 2013, Barclay’s closed the accounts of nearly 90% of its UK-based MTOs, despite being the last large bank in the country willing to do business with remitters. HSBC made the same decision the previous year, following a nearly US$2bn handed down by US regulators.

This `de-banking’ is a response to growing pressure from national and international regulators to comply  with rules on anti-money laundering and combating the financing of terrorism (AML/CFT). Since 2010, the Financial Action Task Force (FATF) has placed 23 countries on its `blacklist’ of nations seen as high risk for money laundering or terrorist financing, or as not doing enough to comply with international standards. That’s more than double the number from the previous five years.

Local regulators have responded by drastically increasing the fines they hand out. In the UK data shows the size of fines issued by the Financial Conduct Authority (formerly the FSA) skyrocketed in 2011, up to almost £10m in some years. That might not seem like a lot of money, but it highlights a trend in which banks now increasingly run the risk of large penalties. Last year, South Africa’s Reserve Bank fined its top four banks approximately $10m for AML violations. Just last week, the US Financial Crimes Enforcement Network (FinCEN) handed down a $20m fine to Oppenheimer & Co for similar problems with compliance. 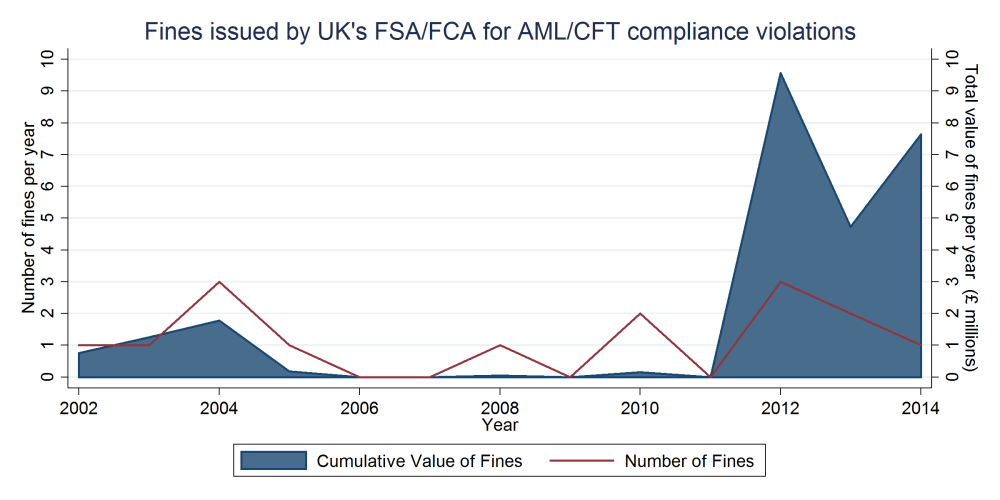 Throwing remittances under the bus

Remittance companies do not bring in much money to the big banks, but the size and random nature of regulatory fines has turned these firms into a liability. Based on 2012 data, four out of the ten most popular destinations for UK remittances in the global south were placed on the FATF blacklist in the last five years. Many other countries which represent only a small portion of remittances (such as Somalia) nonetheless generate concerns over terrorist financing, which in turn raises the expected costs for banks who do business with them.

In testimony given during a legal battle over its decision to kick out its remittance clientele, Barclay’s admitted that it was regulatory pressure, combined with the `high risk’ nature of MTOs which led to their decision to largely withdraw from the market. Rather than assess their customers on a case-by-case basis, as recommended by bodies  such as the FATF, Barclays and many other banks are instead opting to minimize their exposure by cutting out risky remittance corridors altogether. 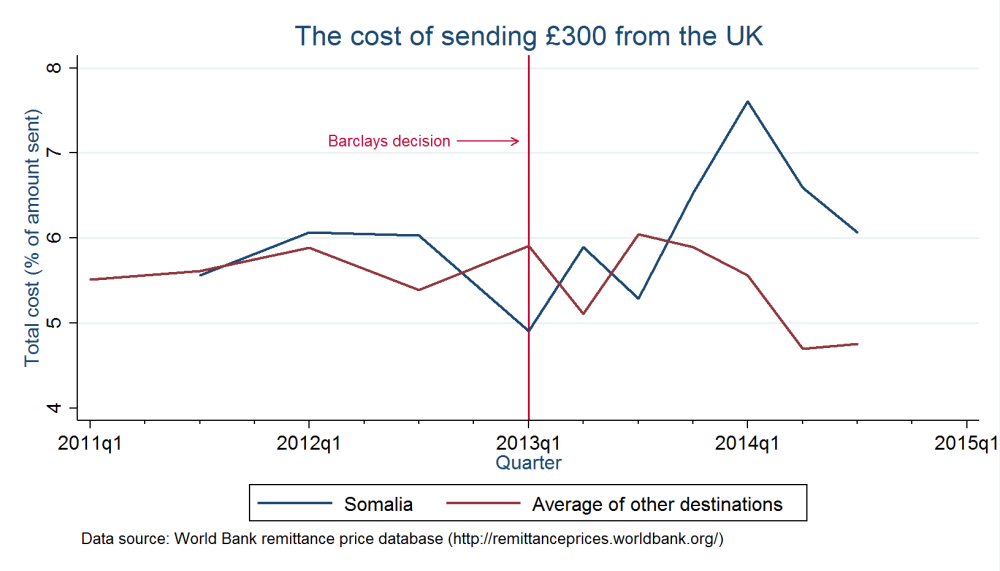 These decisions will ultimately drive up the costs of remitting. Sonia Plaza at the World Bank has documented a rise in bank remittance costs in Australia following its recent spate of de-banking. In the UK, while it is merely suggestive evidence at this point, the price of sending money to Somalia from the UK began climbing following the Barclays decision, despite previously being fairly similar in cost to other remittance corridors from the UK (note that the largest UK remittance provider to Somalia, Dahabshiil, won an injunction against its closure until late 2014). Rising costs mean less money in the pockets of receiving families as well as more cash traveling through informal channels - two pernicious effects that should alarm the development community and regulators alike.