Are We Wrong About the Right Way to Organize Schooling?

At what grade are children taught how to do division? Figure 1 below plots the fraction of children in India, Kenya, Pakistan, and Uganda who can divide a larger number by a one-digit number, with possible remainders (e.g., 659/4), at various grade levels. From this graph, you cannot really tell when division is taught.

The striking thing about this graph is that starting at grade 2/3, the learning profile is roughly linear as the slope starts to increase, until the slope plateaus as mastery reaches 80 or 90 percent (around grades 7 or 8 in Kenya and Uganda, grade 9 in Pakistan, and far too late in India). 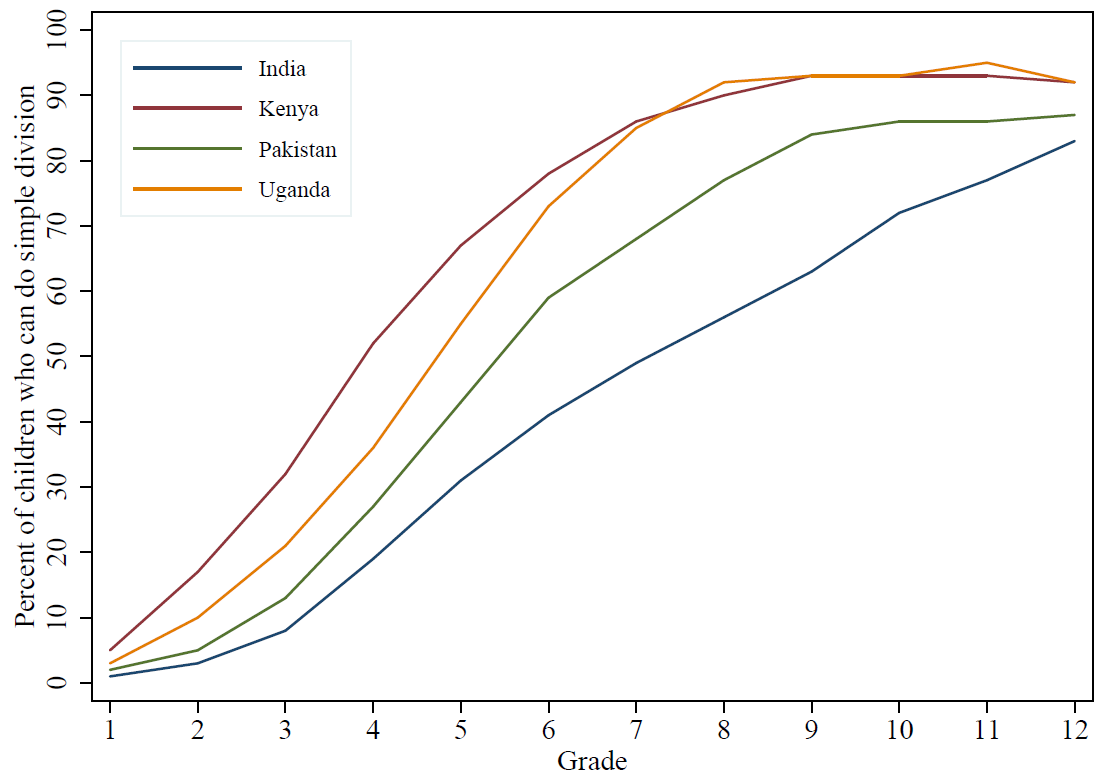 Source: Author’s calculations based on ASER and Uwezo data for all available years.

The case of India

Figure 2. What is the gain in percent of children mastering simple division per grade in India? 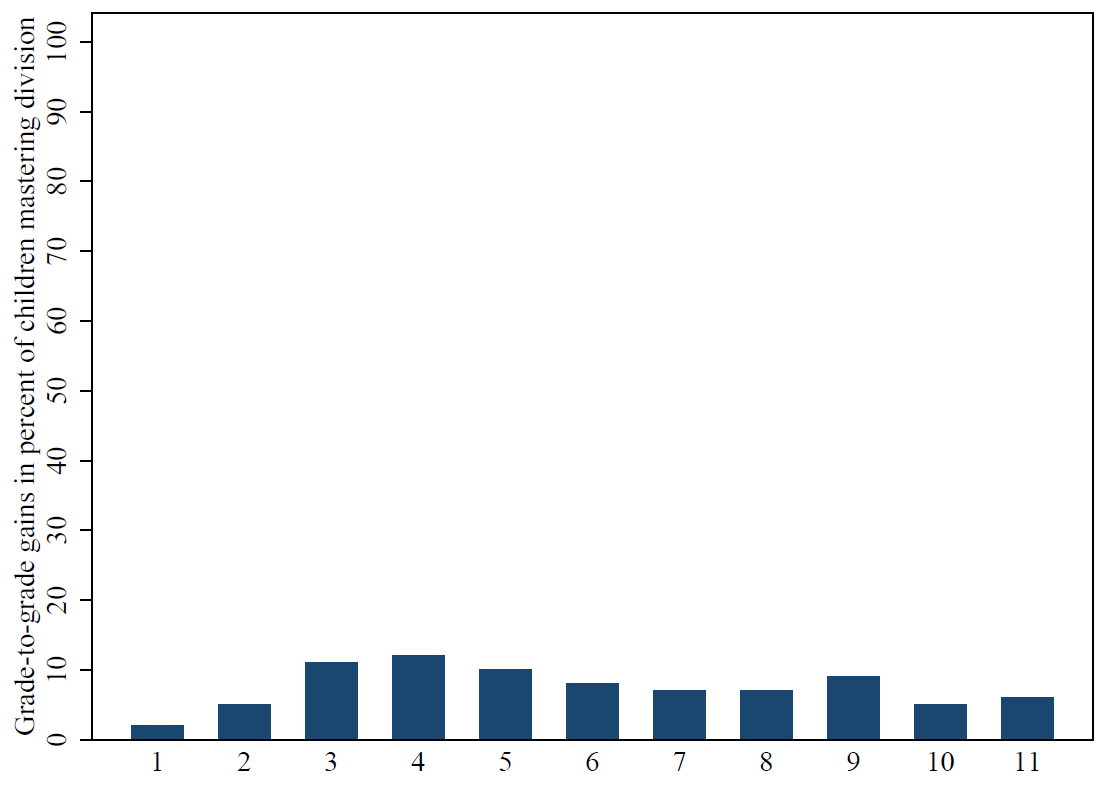 The importance of the “S” curve

Why is this linearity of mastery level across a large number of grades (or equivalently, the rough constancy of the gain) a strange and potentially important fact? The popular notion about how schooling works—and, one could argue, the notion upon which the whole age-grade structure of schooling depends—is that one moves through a series of concepts that build on one another and masters them at the “grade appropriate” level. One would think that the mastery of individual arithmetic concepts taught in a curriculum sequenced by grade (e.g., in first grade we learn one-digit addition, in second grade we learn one-digit subtraction, in third grade we learn multiplication of one-digit numbers, in fourth grade we learn division by one-digit numbers, etc.) would be a series of steep “S” curves in which most children learn the concept in the grade in which it is taught in the curriculum.

For each individual concept in a curriculum—particularly those concepts that build on one another (e.g., the concept of “place” in the representation of numbers base 10 is key to understanding algorithms for multiple-digit addition and subtraction; multiplication and subtraction of multiple digit numbers are necessary for multiple-digit division, etc.)—one would expect to see an S-curve in conceptual and algorithmic mastery, with the steepest part of the learning curve concentrated in the year that the concept was taught. 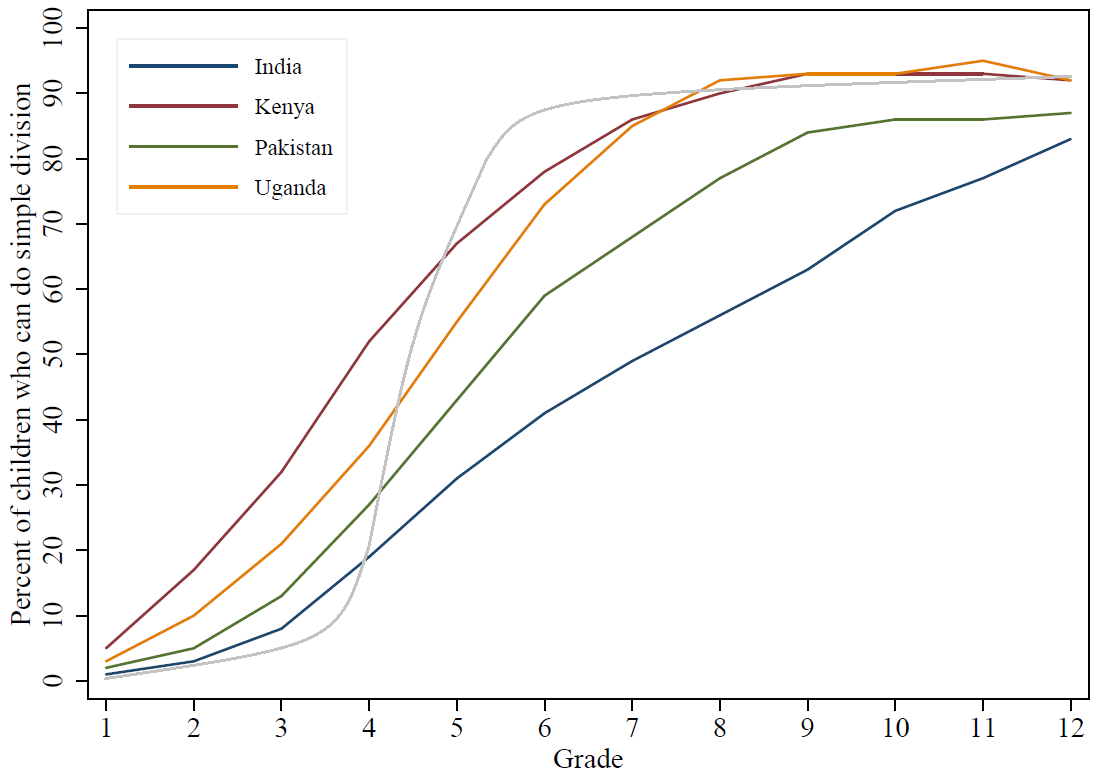 Source: Author’s calculations based on ASER and Uwezo data for all available years.

Figure 4. What would the gain in percent of children mastering simple division per grade in India look like if the learning profile followed an S-shape? 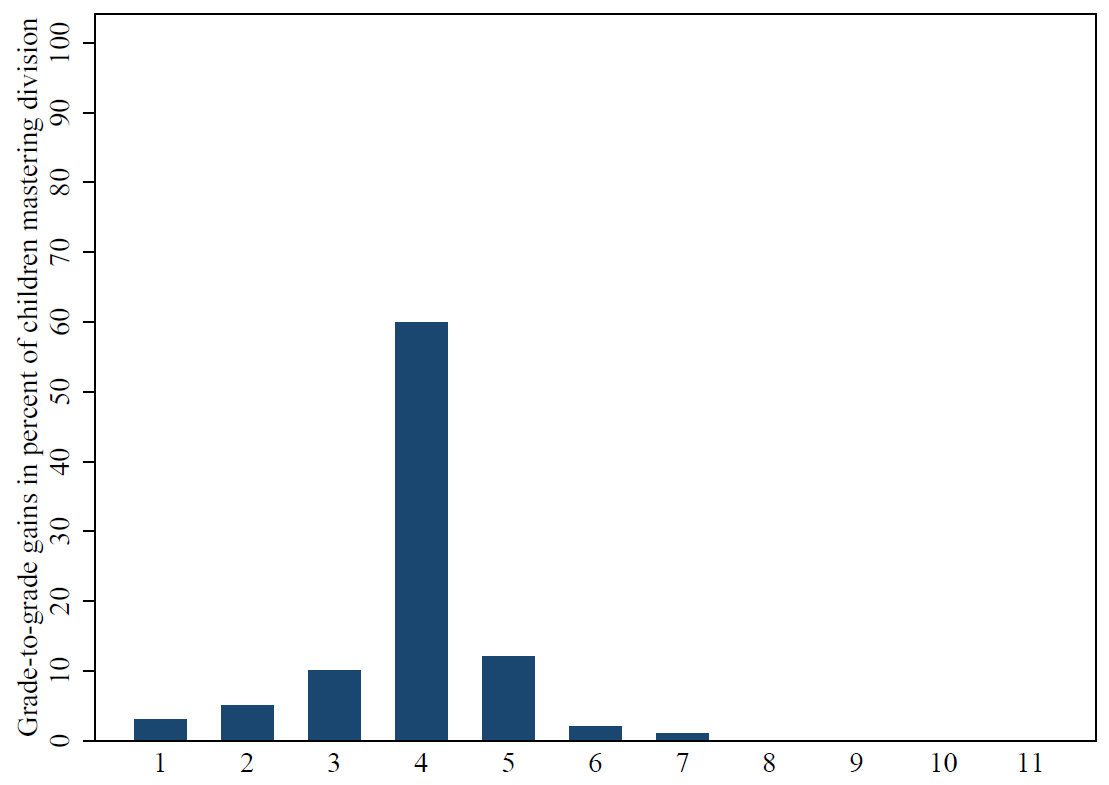 Are these linear learning profiles strange or is that pretty much what the world is supposed to look like? Is it that math concepts are taught but there is lots of repetition and review so that “fourth-grade skill” just means “first time introduced,” but no one really expects a very steep “S” curve in the grade in which the concept is first taught?

What is clear is that without the “S” curve, every teacher is teaching to a very wide distribution of students’ skills in each grade and hence progress is going to be hard.

Nearly all modern schooling uses group-based classroom instruction in a sequenced curriculum. It assumes two things: 1) literacy and numeracy skills are cumulative and best mastered in a certain order, and 2), children in the same grade have relatively homogenous skills. But if the year in which a concept is taught doesn’t make any difference to the likelihood of concept mastery, then what is the advantage of the strict grade structure of classrooms?

Refocusing on “skill-level” for better learning

In a previous blog post, Lant Pritchett showed that if learning per grade relative to dispersion of skills in the classroom is low (some have full mastery and some have zero), then knowing a child's grade doesn’t convey much about their actual knowledge and skills. If learning profiles are flat, as they are in large parts of South Asia, and sub-Saharan Africa, and if there is a large dispersion of skills mastered in a particular grade, then teaching based on a grade-based (and overambitious) curriculum that assumes mastery of grade-level content may be ineffective in raising learning outcomes.

When student ability doesn’t match with the grade-based curricular pace, teaching at the “skill-level” rather than “grade-level” has been shown to improve learning in India and Kenya. Structural changes in the organization of teaching and learning using simple innovations such as Teaching at the Right Level (TaRL) could help more children master basic literacy and numeracy. A pivot to effective teaching and learning will inevitably require deeper thinking about the basics of how schools organize instruction.

Equality of Opportunity and SDG4, Research on Improving Systems of Education