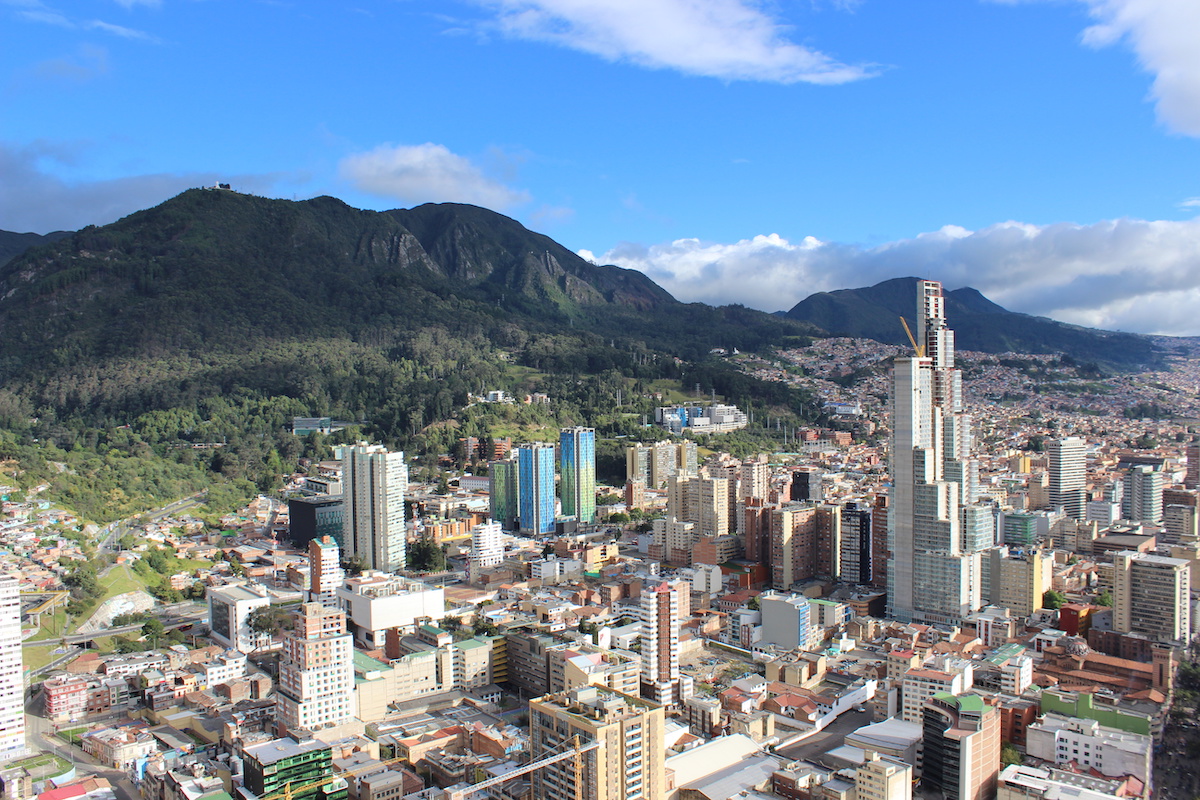 COVID-19 has spread more slowly in Colombia than in some countries. Following the onset of the pandemic, it took 100 days for daily cases (7-day moving average) to reach 100 per million, in contrast to 20 days in Italy, Spain, and the US, and close to 60 days in Brazil, Chile, and Peru. Still, case numbers and deaths continue to rise in Colombia, and the challenges ahead are significant. In a recent note, we look behind these numbers to understand Colombia’s policy responses to the COVID-19 pandemic to date. We offer six recommendations for policymakers, aimed at supporting economic and health responses to the pandemic that work hand-in-hand moving forward.

A slower spread and fewer deaths

Colombia has performed better than advanced economies and similar countries in Latin America and the Caribbean in daily COVID-19 deaths. While COVID-19 has yet to reach five daily deaths per million in Colombia, it took less than 60 days to reach this fatality rate in Brazil, Mexico, Peru, and Chile. Meanwhile, Italy and Spain reached a peak of daily deaths between 20 and 30 per million within 30 days.

However, Colombia has failed to bend the curve of the virus. Both daily cases and daily deaths are still increasing, suggesting that the virus has been tamed but not controlled. There has been some convergence in terms of the daily rates among Latin American countries, including Colombia. Daily deaths (per million inhabitants) are higher than what was observed for advanced economies after 100 days of the outbreak (figure 1). 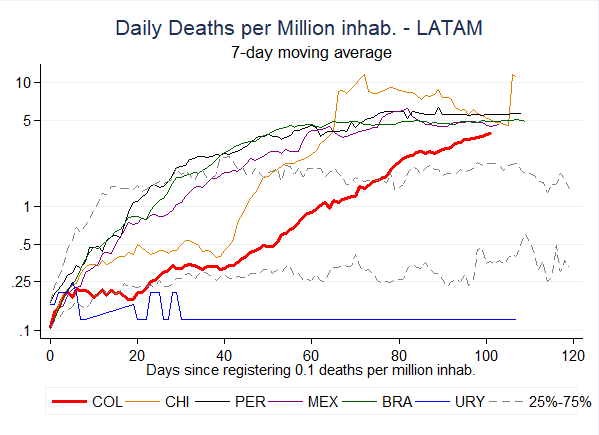 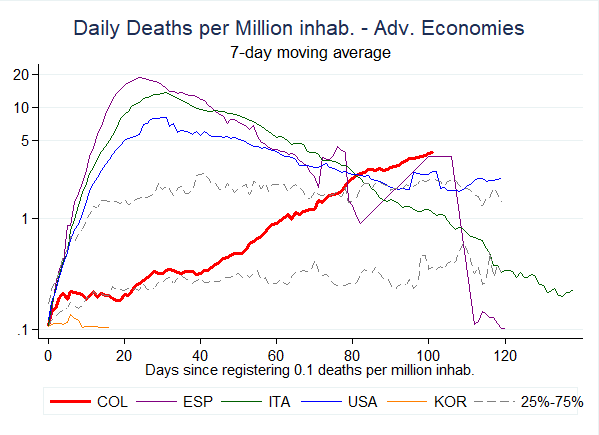 Following methodological changes, the total number of deceased in Spain was reduced by 1,918 cases in May 25 and 1,179 in June 19. Dashed lines show the interquartile range (i.e., all countries in the dataset lie within this range, excluding the bottom and top 25 percent).
Source: Own calculations with data downloaded from Max Roser, Hannah Ritchie, Esteban Ortiz-Ospina and Joe Hasell (2020), ourworldindata.org, (downloaded on 07-19-2020).

Colombia’s positivity rates have increased despite the significant expansion in testing capacity. The number of labs capable of processing tests for the virus increased to 93 in July 2020 from just one before the pandemic, resulting in an exponential increase in daily tests, which are now higher than in most countries in the region with the exception of Chile. However, the positivity rate has been consistently above 10 percent during the last 60 days and shows an upward trend.

Initial evidence suggests that contact tracing has been increasingly less effective. At the beginning of May, close to 45 percent of cases had been identified through contact tracing. This number had fallen to 10 percent by mid-July.

COVID-19 has fueled an expansion of Colombia’s medical infrastructure. Colombia now has 7,950 ICUs compared to 5,400 before the pandemic. ICU occupancy rates at the national level have remained below 75 percent (67 percent on July 16—updated data available here). Further ICU capacity expansion will eventually be constrained by the availability of medical personnel to support these facilities.

Colombia adopted lockdowns relatively early, perhaps too early. In economies with a large share of informal activity like Colombia, it is harder to generate income during lockdowns since informal jobs—which mostly require human contact—are difficult to perform from home. When households are unable to generate income staying at home, they are unlikely to observe lockdown requirements. According to Google mobility data, effective confinement has been falling while the virus continues to spread. This contrasts with the experience in Europe, especially Italy, Spain, and France, where people stayed in their houses until the virus had been controlled (figure 2). 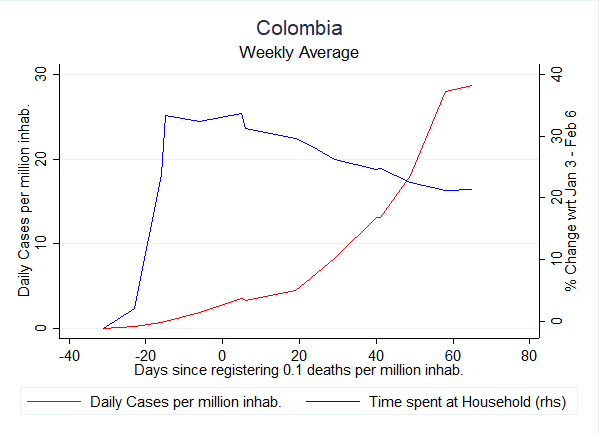 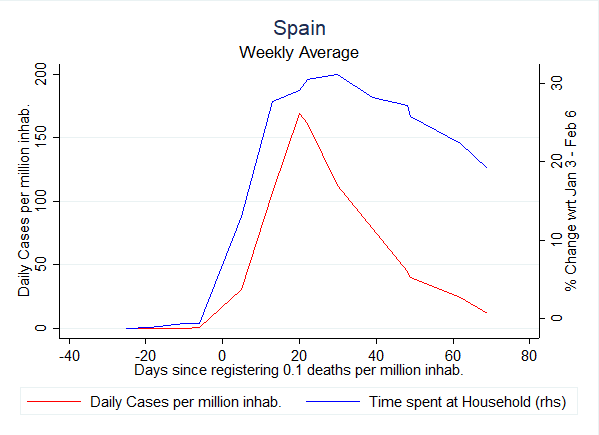 Adding to the lockdown fatigue, there has been significant uncertainty about the quarantine measures. Information about the possible paths out of lockdown has not been clearly communicated. The decisions are explained once they are taken, with lack of clear guidelines on what to expect next. With more information on the factors and reasons underlying the lockdown policy, individuals make better decisions, and if they understand why difficult policies are necessary, they can get behind them. Furthermore, policies should be implemented according to the need of each region: there is significant heterogeneity within Colombia. According to the Ministry of Health, close to 65 percent of municipalities are either COVID-free or have low incidence. The government must have the flexibility and, backed by local authorities, determine an adequate strategy for each context.

Colombia’s government and the central bank responded to COVID-19 with an innovative policy mix. The central bank acted promptly by cutting rates and providing liquidity to the market. Specifically, it implemented a bond purchase program for the first time (i.e., quantitative easing). The bank’s quick and determined action allowed financial conditions to ease, with government bond yields returning to pre-COVID levels by mid-May, after peaking in March.

Likewise, the government used existing cash transfer programs to provide additional support to low-income households. On top of that, a new program, Ingreso Solidario, was rapidly introduced to provide unconditional cash transfers to 2.9 million poor and vulnerable households that, before COVID-19, were not beneficiaries of these programs.

Moreover, in an effort to prevent the loss of formal jobs, the government adopted a program to subsidize payrolls (Programa de Apoyo al Empleo Formal) that pays 40 percent of the minimum wage to all employees in firms with at least 20 percent losses in revenues. Finally, the government stepped up credit guarantees to help alleviate businesses’ liquidity needs. Total emergency spending amounts to 2.7 percent of GDP this year.

Initial numbers measuring COVID-19’s impact indicate that economic activity has been severely hit. In May, the unemployment rate rose to 21.4 percent. Relative to the same months in 2019, the number of employed people fell by 5.5 million in April and by 4.9 million in May. The number of jobs has dropped to the level observed at the end of 2006.

To minimize the damage to economic activity, the government decided to gradually reopen the economy by allowing some nonessential sectors to go back to work, starting on April 28. The effects of this gradual reopening can be observed in leading indicators. Activity seems to be recovering but remains far from pre-COVID levels. Given that the pandemic situation is not improving, and that more severe lockdowns with fewer exceptions were reintroduced in some parts of the country, it will be harder for economic activity to continue picking up—not only because of reimposed lockdowns, but also because people will increase their precautionary behavior and reduce consumption.

Colombia managed to slow down COVID-19’s contagion rate and contain daily deaths. However, COVID-19 is yet to reach its peak. To prevent further deterioration in health and economic outcomes, we offer six recommendations: