COVID-19: How Countries Can Use Digital Payments for Better, Quicker Cash Transfers | Center for Global Development | Ideas to Action Skip to main content

COVID-19: How Countries Can Use Digital Payments for Better, Quicker Cash Transfers

As countries around the world take drastic measures to protect their citizens against the COVID-19 pandemic, the human and economic costs are becoming increasingly clear. In addition to the medical needs of those infected, policymakers are grappling with the short and long-term impacts of mass unemployment and social disruption as economies shut down to limit transmission. Many people in developing countries have little or no financial reserves to fall back on.

In response, countries are expanding social support programs, as well as putting in place new ones. Thanks to the sterling work of Ugo Gentilini and his colleagues at the World Bank, we now have a list of such programs in 106 countries (available here). Social assistance, i.e., payments to the most vulnerable sections of the population is the most widely used (a total of 241 programs), followed by actions in social insurance such as unemployment benefits (116) and supply-side labor market interventions such as job training programs (61). Cash transfers are the most widely used social assistance intervention by governments, representing 65 percent of the social assistance schemes. A total of 71 countries have cash transfer programs in place, with 54 of them new initiatives introduced specifically as a response to COVID-19.

This amounts to a significant expansion in the scale and scope of direct cash transfers as well as other social assistance—a huge increase in government-to-people (G2P) payments. As we explain in our new report, delivering on these programs will require an enormous increase in the capacity of states to implement them, as well as fiscal resources and the political will to help cushion the impact on people, at least to a degree. These are all formidable requirements, but in countries with the resources and will to do so, the immediate challenge is how to make G2P transfers efficiently, equitably, and at scale.

How can we best use technology to do so? We believe that there are a number of countries where cash payments can be scaled up quite broadly, rapidly, and efficiently, including through digital payments. But this depends on having some underlying administrative and digital infrastructure—good identification, clean beneficiary rolls, and efficient payments mechanisms. Countries have two alternatives:

Both approaches will have errors of omission. Existing social programs will not cover everyone in need of support in these unusual times when work and incomes are disrupted, and many of the poor will not have financial accounts. It is particularly difficult to reach migrants who are mostly employed in the informal sector, as we see from the news reports from India, Kenya, and South Africa. But with millions of people facing hardship due to the COVID-19 pandemic, the need of the hour is to move fast and deliver assistance to people who most need it as best possible.

How Can Countries Leverage their G2P Payment Infrastructure in the Response?

ID systems, mobile phones, and financial accounts, a trinity termed “JAM” in India, provide the basic digital infrastructure that enables governments to make payments more effectively and inclusively. As part of our project, we developed a “JAM Index” that looks at how countries score on the coverage of these three elements. Our index, which is based on available 2017 Findex data, scores India and Kenya particularly high. Many other countries, like Madagascar, lag behind. That’s often because of limited access to financial accounts, although the picture should have improved since 2017. The score does not cover all factors—for example, how tightly the three elements are linked together. This is difficult to measure in general, but the most tightly linked systems will be in countries, such as Peru, with long-standing national ID programs that are integrated into SIM card registration, financial account registration, and public services. 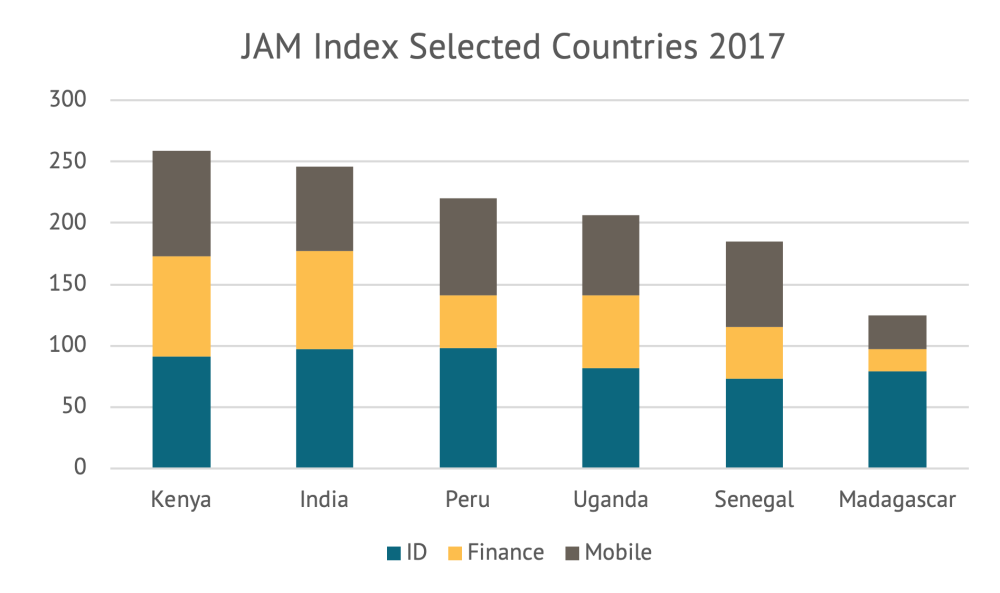 As a first step, the index can give a picture of the building blocks that countries already have to implement a digital G2P payments system. Cash-based social assistance can be delivered most efficiently and timely when the percentage of the population that has access to the three components—IDs, phones, and financial accounts—is high, systems are well-integrated, the existing system of benefits and transfers has wide coverage, and benefits are paid through financial accounts linked to the ID.

In India, over 80 percent of adults have a bank account and around 80 percent of the country’s nearly 1 billion bank accounts are linked to Aadhaar, the biometric ID system. That has enabled the government to shift to digital transfers for many benefit programs, from payments to food subsidies (we examine the implementation of several of these programs in our report). In addition to these existing programs, India can use this infrastructure immediately to distribute payments to all Aadhaar-linked accounts as part of the COVID-19 response. This has already begun, with payments initiated to 200 million women holders of Jan-Dhan accounts, a financial account used for government benefits. A third phase could be to invite others needing assistance to link an account to Aadhaar if they have already not done so and use the expanded coverage to deliver other forms of social protection as the response to the COVID-19 crisis evolves over the medium and long term.

Coverage of Kenya’s social safety net is not as broad as India’s, but the beneficiary rolls are also indexed on the national ID. Using existing programs could take time to scale up. However, financial accounts are all linked to ID numbers and financial coverage in 2017 was around 82 percent, largely because of the widespread use of mobile money. Therefore, the Kenyan government could use the second approach listed above: supplement existing social programs by making direct payments to accounts, using the ID number to avoid duplicate payments. Safaricom, the largest mobile money operator in Kenya, has announced that it will waive fees for most transactions for three months to deal with the COVID-19 crisis.

Is it possible to target such additional transfers toward people who have lost income and need the money desperately but are not on existing welfare rolls, such as migrant workers? Fiscal resources will be at a premium but targeting will be difficult: there is no time for household surveys or complex processes, especially if these require more travel and physical interactions. One approach to avoid large errors of omission could be self-targeting, as used in India’s subsidy program for LPG, or household cooking gas. Individuals presenting their ID or number and applying for the subsidy could be required to sign a legally binding affidavit to the effect that they are below an income threshold, that the disruption has caused them to lose their source of income, and that they are not beneficiaries of other social programs. This could be done via a mobile app, or structured text messaging in the case of a feature phone, in countries where the SIM card is already registered to the ID. On receipt of the electronic request, and after checking the national ID number to ensure that payments had not already been made, a cash transfer could be made to the corresponding account.

Even for countries such as India or Kenya, these approaches do not provide complete solutions, and may confront other problems. For example, a sudden major grant program would cause a surge in cash-out requests that would overwhelm what is normally held by banks or agents at cash out points – payments will have to be phased. But side-effects can be managed, and the new approaches provide more options to at least some governments as they seek to grapple with the challenge.

The COVID-19 pandemic is still evolving, and so is the response. For developing countries to minimize the economic impact, they will need to move fast to put in place mechanisms to deliver social assistance. Technology can help, and countries that have built more robust payment infrastructure will find delivering that assistance easier—but all countries will need to work to help protect the lives and livelihoods of their citizens in the fact of this pandemic.