Did Secretary Kerry Hit the Right Notes in Africa?

This past weekend, Secretary Kerry delivered what was billed as a major address on US-Africa policy and a scene setter for President Obama’s Africa Summit in August. Kerry traveled throughout the region over the last week, making stops in Ethiopia, South Sudan, Democratic Republic of Congo, and Angola. As the list of countries suggest, the trip focused heavily on security hotspots. However, the so-called ‘Commitment to Africa’ speech was his big opportunity to reach beyond current crises and outline his broader vision for US engagement in the region. So, did he hit the right notes?

Sometimes it can be tough to discern top priorities from these kinds of speeches. For starters, senior officials have to balance multiple audiences, both at home and abroad. Moreover, staff fight to ensure that their pet issues or initiatives are mentioned. The end result often is a laundry list of policy themes and initiatives, with little in the way of demonstrable prioritization.

Given this tendency, I’ve parsed Secretary Kerry’s address in a slightly different way – using word analysis tools to calculate how often thematic words or terms were used (see below for more details). Clearly this is an imperfect, somewhat crude way of weighting policy priorities. Nonetheless, it should give us a decent sense of what Foggy Bottom is pushing, or wants to be seen pushing.

So, what themes did Secretary Kerry stress the most? At the top of the list are: jobs and economic issues (27% of thematic references); peace and security (22%); governance and democracy (18%); climate change and the environment (11%); and health (8%). The security hawks, democracy advocates, and environmentalists will likely be pleased with this. At the bottom of the list are: infrastructure (5%); poverty and humanitarian issues (3%); food security (3%); and education (3%). I suspect that many development NGOs and activists might be less pleased with this.

Besides specific interest groups, many US observers would probably argue – rightly or wrongly – that the thematic balance is about right. But, how do Secretary Kerry’s priorities stack up with his other target audience, namely the general public in African countries? To gauge this, I compared his remarks with Afrobarometer’s public attitude surveys that cover over 30 African countries. Specifically, I take the weighted regional results of what people cite as the most pressing problems that their national governments should focus on. Here’s what we find: 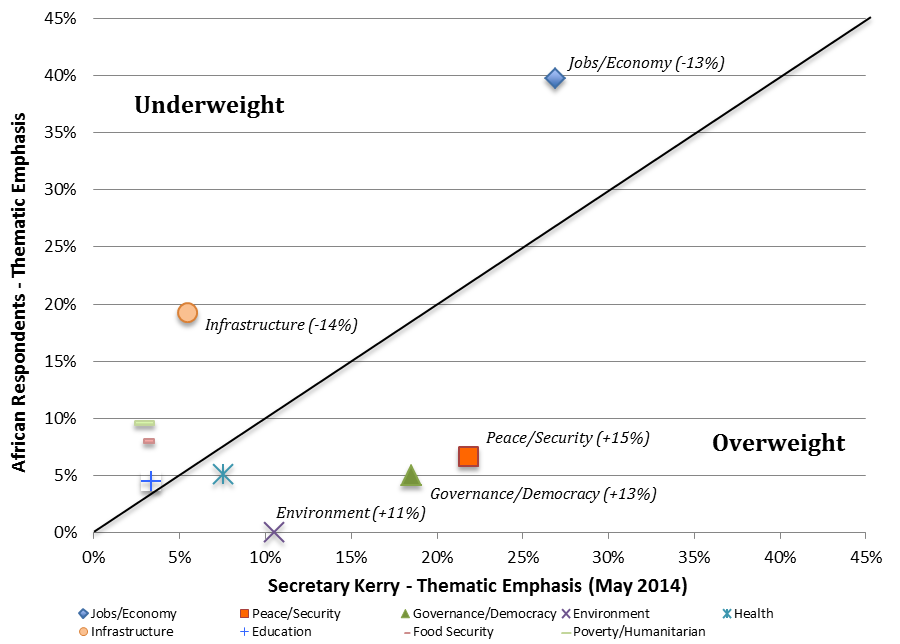 One naturally wonders whether the partially disconnected US policy is prevalent in other regions as well. At the risk of being accused of cherry picking, I applied the same word analysis approach to Secretary Kerry’s major speech at the Organization of American States last November and compared the results to recent Latin American public attitude surveys. 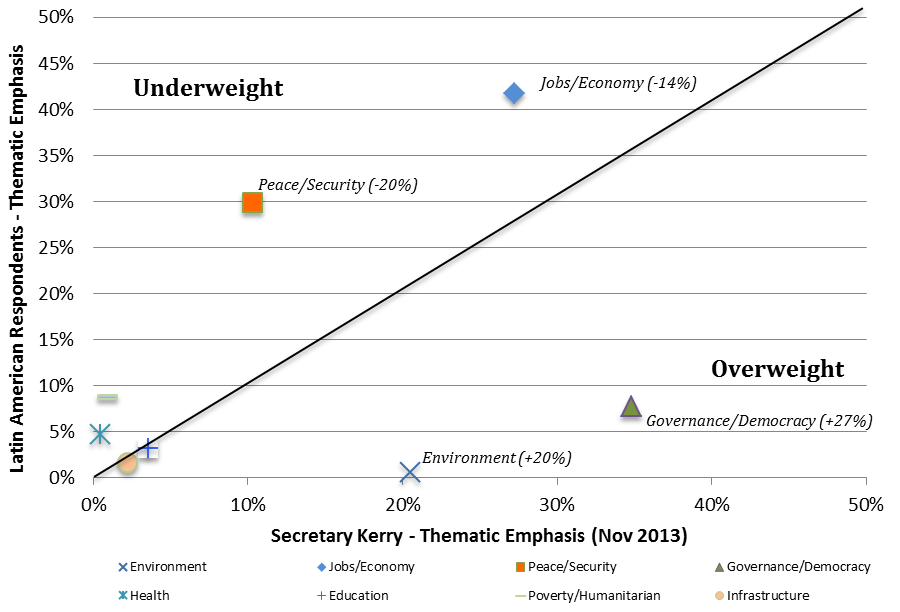 As I noted, this is just one measure – and a rough one at that – of mapping the prioritization of US policies abroad. Plus, Secretary Kerry and President Obama have delivered other speeches, which expand upon themes that were stressed less in Africa last week. Despite these important caveats, the cautionary takeaway may be that major regional policy addresses, like Secretary Kerry’s last week, need to consider what local audiences are hoping to hear (and see). In Africa, that means jobs, the economy, and infrastructure. And as tough as it might seem, that likely also means less on security (outside of hot spots), governance lectures, and lengthy remarks about environmental challenges.

Secretary Kerry’s ‘Commitment to Africa’ speech was delivered at the Gullele Botanic Park in Addis Ababa on 3 May 2014. The remarks included approximately 4,700 words; of which, 1,254 were distinct words.

These distinct words were then mapped against 9 thematic categories, including: (1) education; (2) environment; (3) food security; (4) governance/transparency; (5) health; (6) infrastructure; (7) jobs/economy; (8) poverty/humanitarian issues; and (9) security. The table below outlines how the key words were categorized. In total, roughly 9 percent of Secretary Kerry’s unique words contained in the ‘Commitment to Africa’ speech mapped to thematic categories. The remainder was not assigned to a specific category. 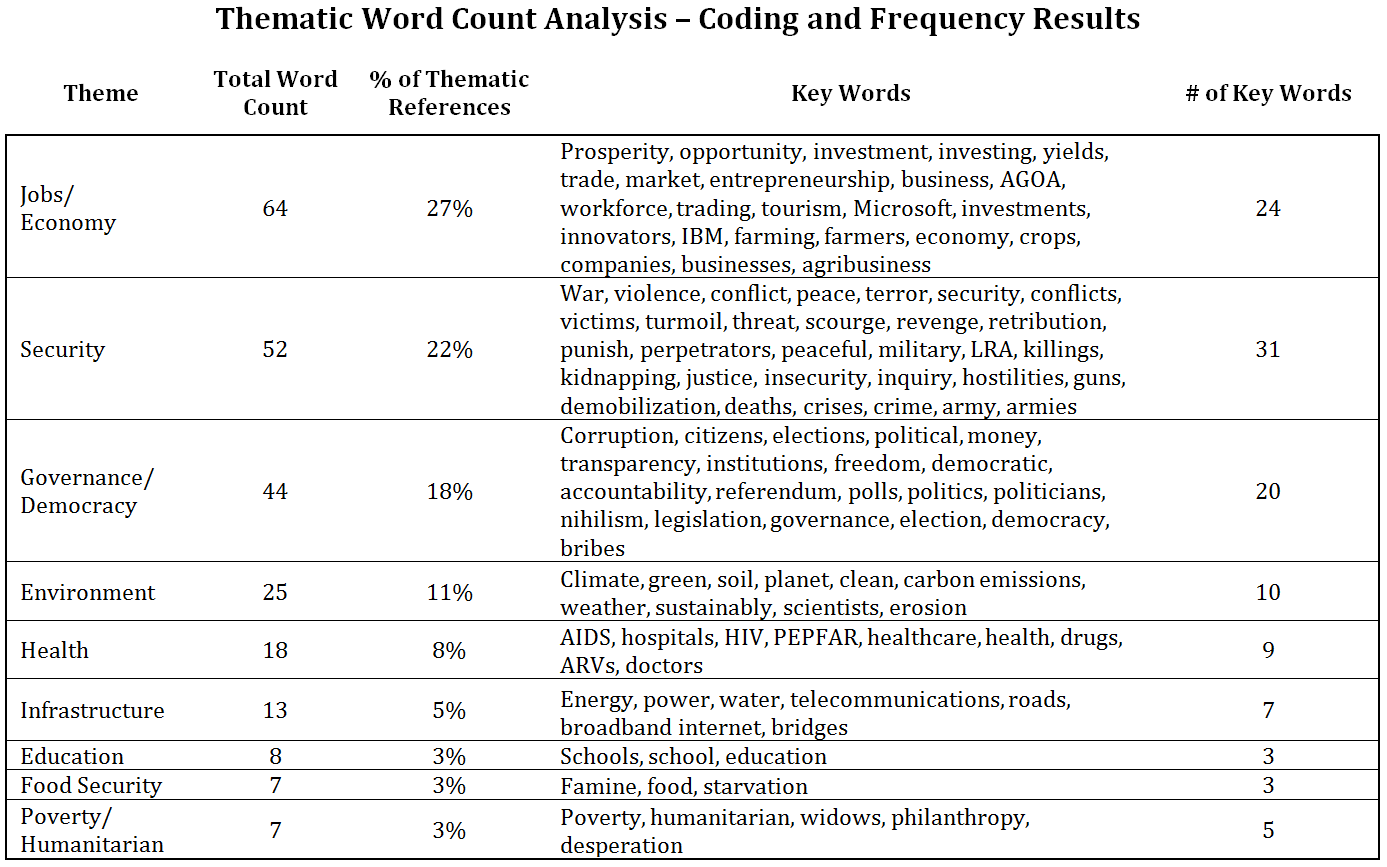 Secretary Kerry’s Organization of American States (OAS) speech was delivered at their regional headquarters in Washington DC on 18 November 2013. The remarks included slightly over 4,000 words; of which, 1,095 were distinct words.

These distinct words were then mapped against the same 9 thematic categories as above. The table below outlines how the key words were categorized. In total, roughly 10 percent of Secretary Kerry’s unique words contained in the OAS speech mapped to thematic categories. The remainder was not assigned to a specific category. 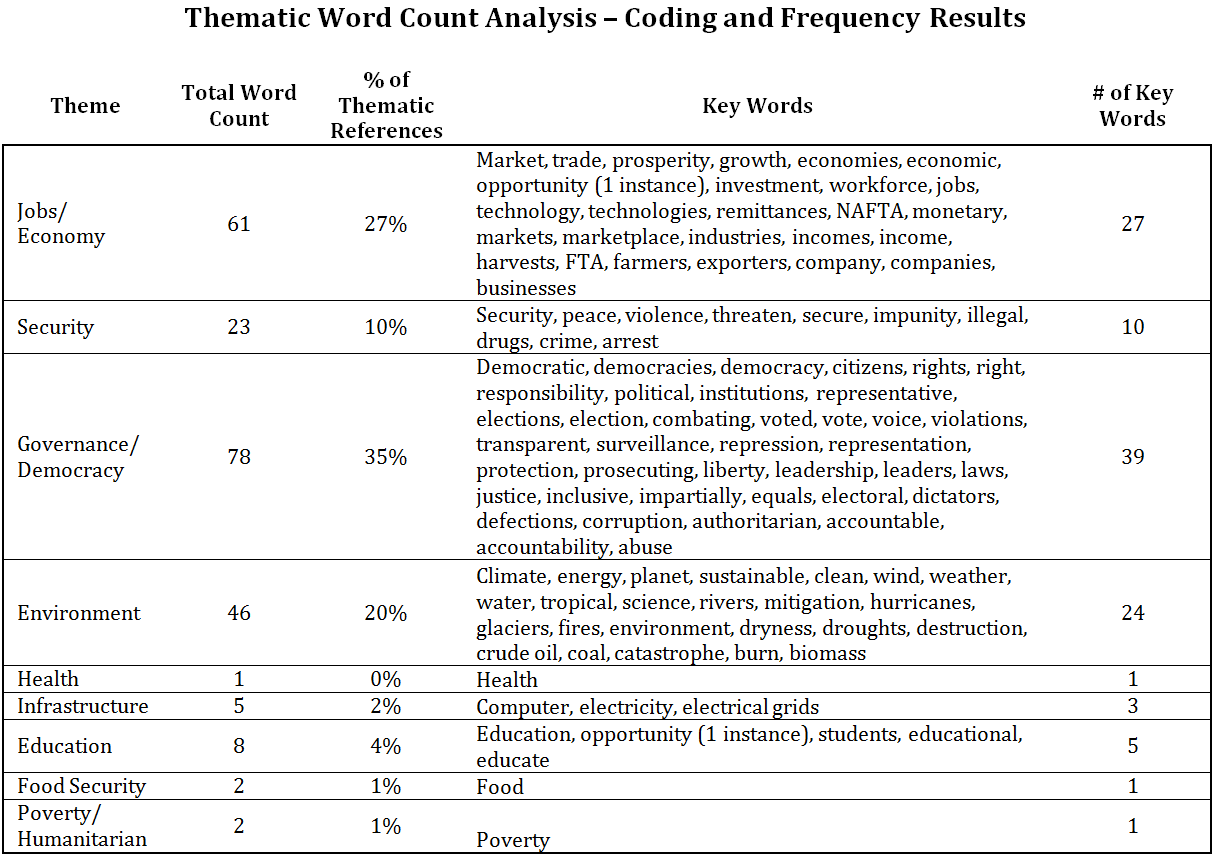 For reference, I have included a summary table below that provides a side-by-side comparison of Secretary Kerry’s ‘Commitment to Africa’ and OAS speeches. The table also includes response patterns for the two regional public attitude surveys.