Does Australia Really Have Good Immigration Policies for Development? | Center for Global Development | Ideas to Action Skip to main content

Does Australia Really Have Good Immigration Policies for Development?

Last week, we released the migration scores from the 2016 Commitment to Development Index. A few eyebrows were raised at Australia’s relatively good performance, at third place, better than any G-8 country and far better than the US or UK. That didn’t seem to fit with what we think we know about Australia’s attitude to immigrants. So did we get something wrong? We don’t think so, and here we explain why not. 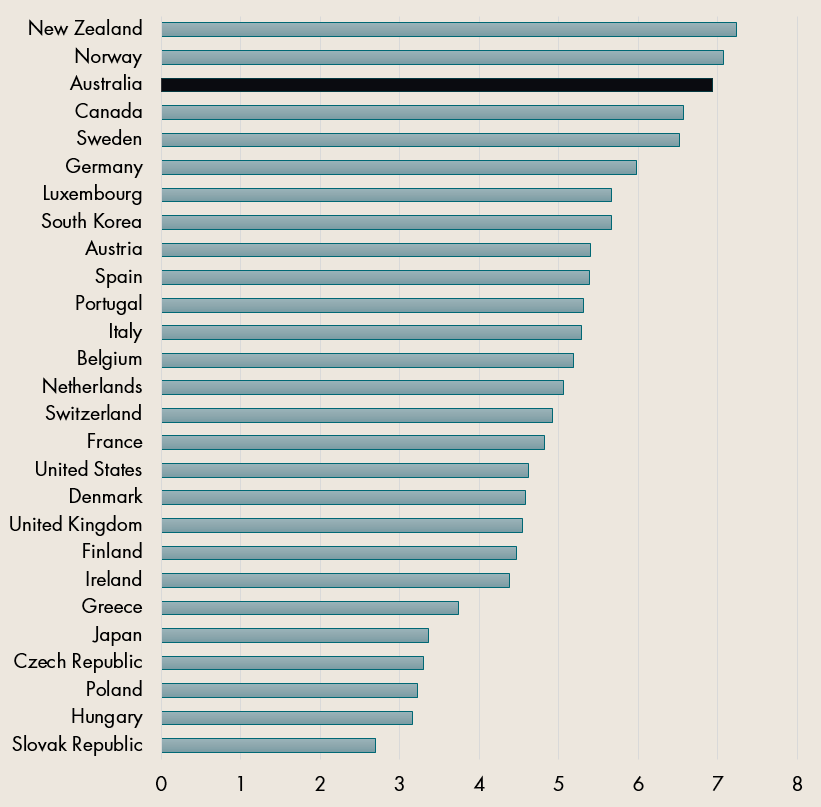 We all know that Australia runs immigration detention centres on Manus Island, Papua New Guinea, and on Nauru, as well as on the Australian mainland. There have been widespread accusations of human rights abuses in these centres; and Australia’s approach has been criticized by the United Nations High Commission for Refugees, United National Human Rights Committee and Amnesty International. Journalists are forbidden from entering these camps, and anyone who works there who reveals information about them faces two years in prison.

Given this, how can Australia do so well on our index? Does this score, as one correspondent suggested, “fail the smell test”?

We are comfortable that the index reflects the overall policy stance. But we acknowledge that as well as averages, outliers and extremes are also important. Australia’s offshore detention of migrants is without question a hugely important issue—indeed, we think it so important that in July this year we proposed an innovative approach to tackling it. The challenge for any index is adequately to reflect extremes in a composite score, since the averages inevitably mask outliers. We should not ignore the scandal of offshore detention, but nor should our outrage about these cases lead us to ignore the wider policy environment, which is also important for millions of people. And looking at these broader policies, the data shows that, Australia is remarkably open to immigration. 27 percent of Australia’s population is foreign-born, compared to 13 percent in the United States and 12 percent in the UK. (Of OECD countries, only Luxembourg has a higher percentage than Australia.)  Put another way, the US would need to open its doors to more than 60 million additional immigrants to increase its foreign-born population to the same proportion as Australia.

A country’s policies cannot be completely represented by measures based on averages; but nor can it be completely represented by the extremes. It is important to supplement quantitative summary scores, of the kind we produce in the CDI, with broader narrative information, including about distribution and outliers, and to make policy recommendations about what needs to be fixed; and that is what we do.

The migration component of the CDI is a reasonable overall measure of a country’s immigration policies as they affect development, and on this overall measure, Australia deserves its place near the top of the index.

First, our index is heavily influenced by the evidence—explained in Clemens (2011)—that it is good for development if rich countries offer opportunities to migrants from developing countries. This has led us to give 30 percent of the index score to the number of new immigrants that a country accepts from developing countries each year, as a proportion of the population in the receiving country. We give more weight to immigration from poor countries. Admittedly the data lags reality by a couple of years, but on this measure Australia scores highest of all the CDI countries, closely followed by New Zealand, Canada, and South Korea.

The positive effects of its large foreign-born population aside, Australia does not do so well on our measure of the numbers of asylum seekers and refugees they accept, which counts for a quarter of the migration component. On this Australia is about middle of the pack: way below Sweden, for example. But Australia takes a lot of students relative to its student population (second only to New Zealand), and this accounts for 15% of the score. Furthermore, Australia gets extra recognition for the fact that, of those foreign students, 71 percent are from developing countries (a proportion bettered only by South Korea and Japan—the equivalent figure for the UK is 51 percent).

Finally, and perhaps most controversially, Australia does relatively well on MIPEX, a measure of whether a country has policies which promote integration and well-being of migrants. This is important for the impact on development, both because it is an indicator of the improvements in the lives of the migrants themselves, and because it is an indicator of whether migrants will be able to send remittances home, or reunite families. It may be surprising that Australia does well on this measure: eighth out of the countries in the CDI and comfortably ahead of both the UK and the US. But for most immigrants, this score is justified. For example, Australia is second only to Sweden in the way that the children of immigrants are integrated into the education system; and nearly all permanent residents can quickly become citizens and fully participate in Australia’s civic life, a measure of integration on which Australia comes fourth after Portugal, Sweden and Denmark.

But the way MIPEX is constructed means that it does not, unfortunately, reflect concerns about the way some asylum seekers, refugees and migrants are treated in some countries, including the salient example, which is sadly not unique, of Australia’s detention centres. We constantly update the methodology and data sources for the CDI, and to the extent that comparable cross-country data can be produced, the treatment of potential refugees who are not granted asylum should indeed be part of future iterations.

No index is perfect, of course. The CDI is doing its job of drawing attention to the many ways in which a country’s policies affect international development, stimulating a conversation about what the evidence tells us about which policies are important, identifying room for improvement, praising countries which pursue good policies, and creating a framework for more qualitative analysis and policy recommendations. We think it is important to recognise that, overall, Australia does have relatively development-friendly migration policies, while at the same time deploring alleged human rights violations in immigration detention centres.