[Note: A follow-up post presents an index and ranking based on the indicators below.]

If you’re a policy researcher, you’ve probably received a request to nominate or rank think tanks for the 2012 Global Go To Think Tank Index (GGTTT). This index, compiled each year by the Think Tanks and Civil Societies Program led by James McGann at the University of Pennsylvania, is the most comprehensive effort to evaluate think tank performance.

In 2011, some 1,500 people nominated more than 5,300 tanks for the GGTTT. Nearly 800 advisers then served on 30 virtual panels that ranked the tanks by region and field in such categories as Best Use of the Media, Greatest Impact on Public Policy, and Best Supporting Actress.

OK, not Best Supporting Actress. But the jest is just. Like the Oscars, Go To Think Tank envelopes go to the institutions that get the most votes, and those votes are based on subjective criteria inscrutably embedded in the heads of the voters. As a result, the meaning of the results is often unclear. It’s not immediately obvious why, for example, the Council on Foreign Relations topped the list of Tanks with the Best Use of the Internet or Social Media to Engage the Public. And being unsure about what CFR did right makes it hard to learn from the institution, or even be sure that it is the right role model. (Enrique Mendizabal, Goran Buldioski, and Christian Seiler and Klaus Wohlrabe have said similar things. Also see David's commentary in 2009.)

Having cast ballots in the Think Tank Oscars, one of us (David) can report that the criterion on which he relied most heavily as he picked a list of tanks for each category was which ones he’d actually heard of. Since a lot of people have heard of the Brookings Institution, we are not surprised that it regularly comes out on top.

Not to knock the éminence grise across the street from us, but all this made us wonder: might there be a more meaningful—dare we say, objective—way to rank tanks? We do not aspire to develop a think tank index, for we lack independence of our subject. But existing efforts seem to leave room for improvement. In general, one can assess think tanks in various ways: gather metrics of their web presence; survey their peers (as the GGTTT essentially does); have a committee review in-depth descriptions of a small number of tanks, as Prospect Magazine does for its think tank award. We expect that the best approach would blend several of these strategies.

As it happens, the instructions to GGTTT panelists encourage them to factor into their qualitative judgments such quantifiable characteristics as:

If these things matter, why not measure them directly? Here we take a stab at doing that, perhaps offering an example for a more independent group wanting to blend different kinds of information into a fuller index. Like other quantitative assessments (Posen, Trimbath, FAIR, DCLinktank), our data focus on the public profile of think tanks—media and academic citations, web links, popularity in social media. Compared to those previous assessments, we measure more dimensions of profile. That’s thanks in part to the continuing diversification of the media environment (think Facebook) and the evolution of tools to analyze it, such as Altmetrics. But like them, our measures tend to favor institutions such as CGD that strive to build a high public profile. As David noted in 2009, some tanks succeed by staying out of the limelight, focusing on small but powerful audiences such as legislators.

Our experience with building policy indexes such as the Commitment to Development Index makes us keenly aware of the limitations of any such exercise. Think tank profile is not think tank impact. Fundamentally, success is hard to quantify because think tanks aim to shift the thinking of communities. But the operative question is not whether we can achieve perfection. It is whether the status quo can be improved upon. Seemingly, it can be: it only took us a few weeks to choose metrics and gather data, and thus produce additional, meaningful information.

For this initial foray, we focused on the 20 American think tanks that appear on any of the "special achievement" lists of the 2011 GGTTT. The GGTTT also groups tanks by global region, specialty, and affiliation (government, university, political party, independent). We found that choosing our group the way we did produced a list of institutions that are reasonably appropriate to compare, and for which data were easily available. For U.S. institutions, for example, budget data can be obtained from publicly available IRS filings. (In the spreadsheet, we also run numbers for a motley crew of 23 think tanks around the world under GGTTT's International Development heading.)

The two tables below display six indicators that look promising, being relevant and practical. The first table shows the data we collected. You might say it measures touches per tank or the "influence profile." (In most columns a higher number is better. But for web traffic rank, smaller is better: if Google were on the list, it would get a 1.) The second table divides those figures by each institution’s annual spending in order to gauge efficiency, what we might call touches per dollar or the adjusted influence profile.

We’d love to hear your criticism and ideas. With that feedback, and after some time to reflect, we may refine the metrics. We'd prefer for you to make your comments public (below) in order to influence anyone who takes the baton from us.

For more of our own thoughts, keep reading after the tables. 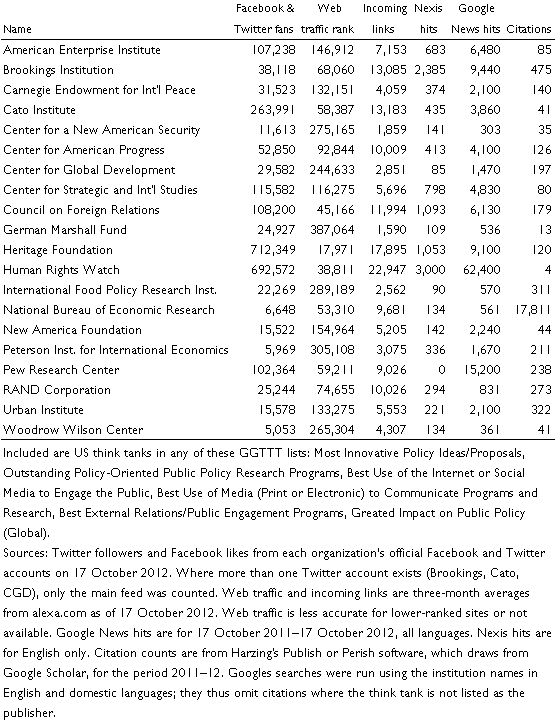 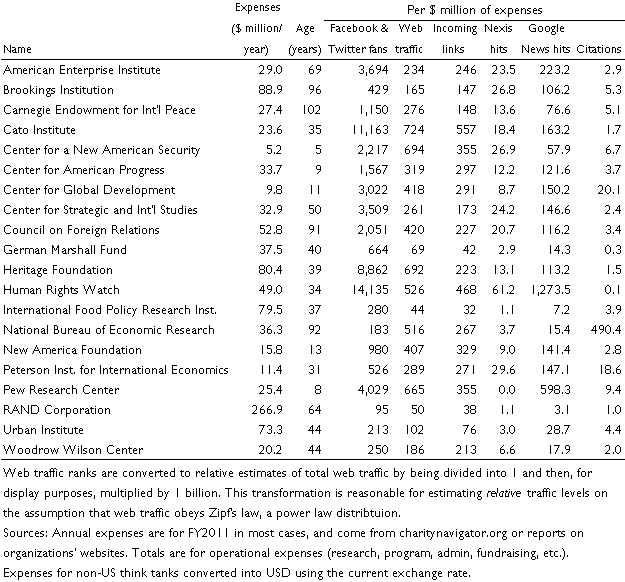 Some big methodological questions have arisen:

In addition to filling some data gaps (e.g., budget info for certain organizations), we’d also like more or better metrics for:

Some sources/metrics/tools we explored but didn’t use:

Again, we welcome your thoughts on all of this---below, or by e-mail.

In 2013, our CGD colleagues Julia Clark and David Roodman designed a low-cost quantitative approach to rank US and international development think tanks by the strength of their public profile. Think tanks trade in ideas and ideas need to be noticed to be adopted. Thus, think tanks’ ability to garner public attention is likely to be a good marker of their influence and potential for impact.

Blog Post
The Best Job in the World
Lawrence MacDonald

When my children were young we sometimes played a game at the Thanksgiving table: each diner wrote on a slip of paper something for which she or he was grateful, folded it and placed it in a basket. We then passed the basket and took turns picking one, reading it out loud and guessing who wrote it. I often wrote: "I am grateful to have meaningful work" and when it came time to explain I would say that I felt very lucky to work at CGD and to have what was for me the very best job in the world.