A Global Carbon Tax or Cap-and-Trade? Part 1: The Economic Arguments

If you could choose how to curb greenhouse gas emissions, would you choose a carbon tax or cap-and-trade? Environmental economists have long debated this question, and it will be on many people’s minds in the run up to the climate meetings at which world leaders will attempt to reach agreement on how to limit global warming to 2°C in Lima (December 2014) and Paris (November–December 2015).

In this post, we’ll recap what the economics tells us about this choice, and we’ll offer a challenge to the general consensus in favour of a carbon tax. Next week, we’ll depart from idealized economic theory and consider the practical questions which we think tip the balance towards cap-and-trade.

What does economics tell us? 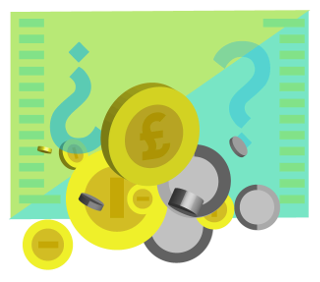 Either way, you would be putting a price on carbon to reflect the true environmental and social costs of emitting a ton of carbon dioxide. And either way you would generate revenues for the government (either tax revenue or income from auctioning permits) that you could use to cut other taxes or invest in clean technologies.

So which is better? This question is particularly salient in the wake of new regulations from the US Environmental Protection Agency (EPA) giving states the flexibility to chart their own customized path to meeting their reduction targets.

Economists have been thinking about the respective merits of price controls and quantity limits for some time. Conventional economic analysis (including a ground-breaking paper by Martin Weitzman in 1974) has usually favoured price-based instruments like taxes. We argue that the potential for irreversible damage from climate change strengthens the case for cap-and-trade instead. Here’s why.

Fixing a price or fixing a quantity are notionally equivalent

You can make the case either way.  If your goal is to set clear, predictable, long-term incentives for people to switch to clean energy and to invest in clean technologies, then you want to set a predictable long-term price. That is the simplified case for a carbon tax.

But there is a contrary view: we don’t necessarily know the right price to set on carbon. Setting it too high could have large economic costs and setting it too low would lead to potentially irreversible climate change. Given that our key underlying objective is to limit the volume of carbon emissions, then we should set the quantity and let the market take care of setting the price. That is the simplified case for cap-and-trade.

Theoretically, if we knew with certainty how much would be emitted for any given price, then these two approaches would be perfectly equivalent.  You could set the price and be certain how much emissions would decrease, or you could set the level of emissions and be certain about the price on which the market would settle. Think of this as a graph of price and emissions: if you know exactly where the line is, it doesn’t matter whether you pick your point along the curve using the price on one axis or the level of emissions on the other, since picking one mechanically fixes the other.

But in real life, quantity and price controls differ because costs are uncertain

In the real world we don’t exactly know how much it will cost to reduce emissions, nor do we know what the environmental damage will be from a given level of emissions. That means that whether we set a price or we set a quantity, we are almost certain to be a little bit wrong, and this will impose a cost on society. In an uncertain world we can’t entirely avoid these costs, but as Martin Weitzman showed, we can keep them to a minimum by choosing the right instrument.  Whether we prefer price or quantity controls depends on a combination of where the uncertainty lies, and how much of a difference it makes if we get things little bit wrong.

The diagram below, from William Pizer (pdf), shows two scenarios.  On the left is the scenario which many economists think is realistic. In this scenario we would have to make a big change in the quantity of emissions to increase the marginal benefit to the environment (that is, a flat marginal benefits curve) but the marginal cost of reducing emissions rises quickly as the amount of abatement needed goes up (a steep marginal cost curve).  In this case we know in advance roughly what price is needed to produce environmental benefits, and the deadweight loss from setting the price at the wrong level (shown in yellow) is small.  But because the marginal cost curve is in this scenario is relatively steep, setting a quota and letting the price adjust could lead to substantial inefficiency and welfare losses (shown in blue) because of uncertainty about the position of this curve. 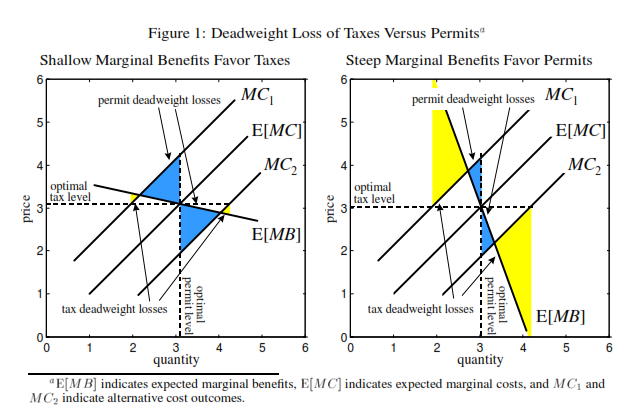 On the right hand side is the opposite case, in which the marginal benefit curve is steeper than the marginal cost curve. In this case, the potential cost of uncertainty is greater if policymakers set the price (the cost is shown in yellow) than if they set the quantity (shown in blue). In this case, we should prefer to set the quantity of allowed emissions, and let the market find the right price.

The conventional wisdom is that we are probably in the position depicted on the left.  Since it is the stock of pollutants (such as carbon dioxide) in the atmosphere which affects climate change, it might not make a huge difference to the climate and natural ecosystems if the flow of new pollutants in any given year is a little bit too high. This suggests that the marginal benefit for the environment of reducing the flow of emissions is low and would not rise very fast as emissions come down. Conversely, the marginal cost of reducing emissions might rise quite quickly (the cost of high-hanging fruit for emissions reductions could be a lot more expensive than tackling low hanging fruit).

So with a flat marginal benefits curve and a steep marginal cost curve, it is likely to be less expensive to society as a whole to set the price of emissions, using a tax, and accept that the effect on the volume of emissions is a bit uncertain, than to set a quantity cap on emissions and risk the economic costs of forcing up the price of carbon to unnecessarily high levels.

But this widely-held view depends on whether the effect of emissions on climate change, and the ensuing damage to natural ecosystems and to human society is, in the words of Rick van der Ploeg, ‘big potatoes’ or ‘small potatoes’. If there are non-linear system dynamics, perhaps involving irreversible regime shifts, then the marginal cost of being a little bit wrong about the quantity of emissions may be very substantial.

The relationship between carbon emissions and the climate system is not likely to be a smooth, continuous function. Nor is the relationship between global warming and the impact on the economy and human wellbeing.  A general property of non-linear systems is that they can exhibit “regime shifts”: changes that are large, discontinuous, and difficult, expensive, or even impossible to reverse.

The realm of possible climate-induced damage includes events that are unlikely, but cataclysmic or irreversible, such as the release of vast amounts of carbon and methane from the permafrost and ocean floor.

Tipping points such as the widespread dieback of rainforests, the bleaching of coral reefs, and the collapse of the ice sheets may kick in as the climate warms. In the jargon, the probability distribution of harm is fat-tailed. The potential for climatic tipping points, such as the weakening of the Atlantic thermohaline circulation, apart from providing sensationalist fodder for mediocre Hollywood blockbusters, suggest both that that the damage curve is likely to be non-linear, and — since it is the stock of pollutants that matter— we may not be able to remedy the effects of under-pricing carbon today just by adjusting the price later. 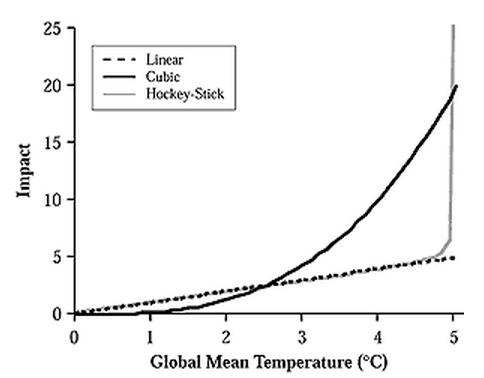 Source: Figure 19.5. Chapter 19, Working Group II: Impacts, Adaptation and Vulnerability. Third Assessment Report, 2001. Note: the most recent IPCC report on this topic is from 2013. The graph used here is for stylized purposes.

This point about the shape of the curve may sound esoteric, but it reflects an important common-sense idea about the asymmetry of risks.  If we set the carbon price too high, we risk unnecessary economic costs, reducing the well-being of many people. But if the carbon price is too low and emissions are too high, then we risk large and possibly irreversible interference with the climate system. If the human costs of unexpectedly high emissions are sufficiently large, then capping the quantity of emissions directly would be better than setting the price because the costs of uncertainty are lower under cap-and-trade (the right hand diagram above).

If we believe that the marginal benefits curve is steeper, and the marginal cost curve shallower than conventional wisdom suggests, then given the likely costs of these uncertainties we should conclude that it is better to set a cap on the quantity of emissions, and let the market determine the price, rather than the other way round.

If we were very concerned about the economic costs of price uncertainty and volatility, we could mitigate these risks that by incorporating price-like features into a cap-and-trade scheme, such as allowing for banking and borrowing of allowances. Emitters could choose to save and use up allowances in the future or to borrow them from future allocations. That would have the effect of helping to smooth out the price over time and reducing the negative impact of cost shocks. Economists such as Roberts and Spence (1976) and Pizer (2002) have suggested hybrid systems which combine both price and quantity-control features could offer the best of both worlds, provided they are done well.

Although simple theory is sometimes characterized as favouring a carbon tax over cap-and-trade, we think the economic case is less clear-cut when we account for the asymmetry of risks in a complex, non-linear system like our climate. Our follow-up post considers the messier, real-life arguments that we believe tip the balance more decisively towards cap and trade.  In the meantime, we’d love to hear what you think in the comments.