The first and second reports were clear:

The third report adds this:

The IPPC estimates that temperatures will hurtle past the 2°C target (widely accepted as a safe level) by 2030 if no additional mitigation efforts are made. Delaying mitigation will require steeper emissions reductions in the future (2030 to 2050), and faster deployment of low-carbon technologies. Because of the risk of institutional and technological lock-in to emissions-intensive pathways, postponing mitigation efforts will make the transitional and long-term economic costs more expensive, and will significantly narrow our chances of limiting warming to a safe level.

Meeting the 2°C target will require a tripling or quadrupling of clean energy sources such as renewables, nuclear, and carbon capture and storage technologies by 2050. The report concludes that this will necessitate a fundamental transformation in the way humans produce and consume energy, and manage land systems. To unlock such structural change in a cost-effective manner, the IPCC scenarios require that there is a global price on carbon for dangerous warming to be constrained. This means that policymakers at the forthcoming high-level climate meetings in Lima and Paris this year and next should establish some form of pricing carbon credibly, such as an emissions trading scheme.

This third report is concerned with the actions and policies that the world can take to meet the stated objective of the United Nations Framework Convention on Climate Change (UNFCCC) to “prevent dangerous anthropogenic interference with the climate system.” Countries around the world have agreed that letting warming stabilize above 2°C relative to pre-industrial levels, or above atmospheric concentrations of 450 parts per million of CO2-equivalent, would result in unacceptable damages.

The good news is that the 2°C target is affordable

This is equivalent to shaving off just 0.06 percentage points a year in consumption growth over the 21st century. This is eminently affordable. Note that this doesn’t even factor in the co-benefits of mitigation (such as reduced impacts from climate change, which left unchecked would lead to substantial loss of life, livelihoods and property).

While the news that the world can meet this target relatively affordably should be met with cautious optimism, it depends on two critical conditions: (1) not delaying mitigation any longer; and (2) setting a global price on carbon.

Here’s why these conditions are necessary.

The report summarises the findings of 300 baseline scenarios: models where no additional mitigation efforts are made. The consensus is clear: if we do nothing, temperatures will increase between 3.7°C and 4.8°C by the end of the century relative to pre-industrial levels, and we will likely shoot past the 2°C target before the middle of the century.

A 4 degree world would result in a host of deleterious impacts, such as more frequent and more severe storm surges; a greater proportion of Category 4 and 5 hurricanes; more variable rainfall patterns which would increase the risk of drought; and sea level rise, all of which would act as stressors on countries’ endowments and institutions and would exacerbate the risk of political insecurity and conflict.

Every additional year that we delay mitigation will make it more expensive and harder to meet the 2 degree target. There are both scientific and technological reasons for this.

Carbon dioxide and other greenhouse gases such as methane, nitrous oxide and fluorinated gases are long-lived gases which take centuries to decay from the atmosphere. What matters for limiting temperature warming is the cumulative stock of emissions, that is, total emissions since the Industrial Revolution. This means that the marginal damage of emissions is increasing: each additional metric ton that we pump into the atmosphere is more damaging than the previous one and will make it harder to stabilize warming at safe levels.

Early action is also necessary because economies can get locked in to GHG-intensive pathways. Lock-in to dirty technologies usually happens in long-lived infrastructures with high investment costs. This risk is especially high in spatial planning.

Any delay in cutting emissions will make cost-effective mitigation scenarios very difficult, and will require a steeper emissions reduction from 2030 to 2050. Scale-up to low-carbon technologies would need to happen much more quickly, and would heighten reliance on carbon dioxide removal (CDR) technologies in the long-run. Delaying action this decade will make the transition more painful and will lead to much higher long-term costs.

The report suggests a cut-off point which strongly implies that this decade is make or break. If annual emissions reach around 55 gigatonnes (billion metric tonnes) of CO2-equivalent by 2030, then the prospect of staying below 2°C would become much harder, and much more expensive.

For the record, total emissions from all greenhouse gases were 49 GtCO2-eq in 2010 (with an uncertainty range of more or less 4.5 Gt). 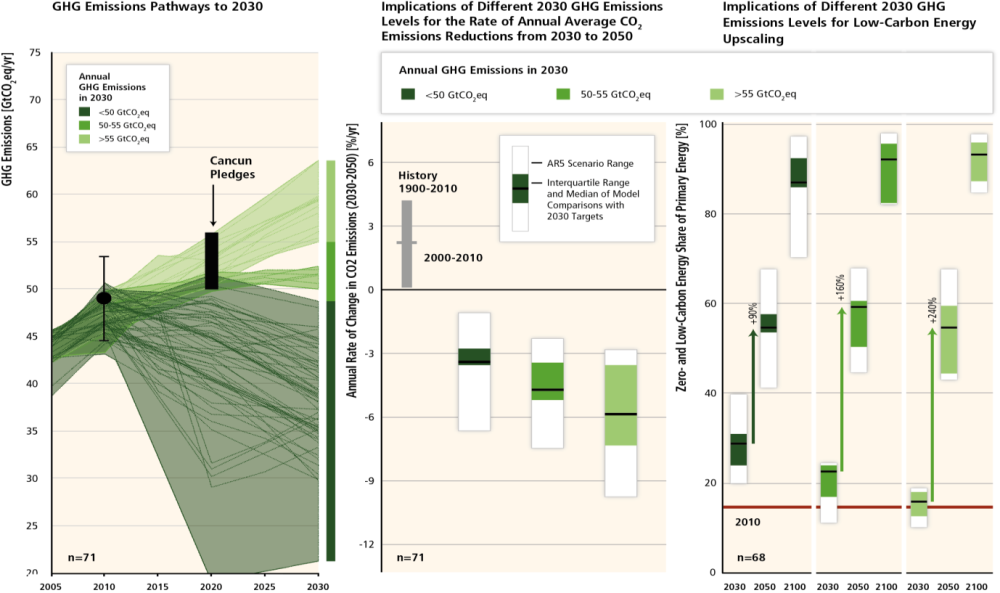 Figure 2: The implications of different 2030 GHG emissions levels for the rate of CO2 emissions reductions and low-carbon energy upscaling from 2030 to 2050 in mitigation scenarios reaching about 450 to 500 ppm CO2eq by 2100. Source: IPCC, AR5, WGIII, Figure SPM.5.

The world needs a structural transformation, but there is no silver-bullet technology

To keep temperature change below 2°C relative to pre-industrial levels, global GHG emissions need to fall by 40% to 70% relative to 2010 by mid-century, and need to approach zero by 2100.

A zero carbon world by the end of the century will require a radical transformation of the way we produce and consume energy and of our land use systems.

There is no silver-bullet technology that will keep the climate system at a safe level. Mitigation options will differ by sector according to their cost and their abatement potential. Most models which see the world reaching the 2°C target rely on CDR technologies for it to happen. Carbon and capture storage (CSS) technology, which removes the carbon dioxide content from emissions, is one option. While elements of CSS are already in use, it has yet to deployed in a large, operational commercial fossil-fuel power plan.

Afforestation is another key option. Any 2°C target will require that deforestation grinds to a halt, but if CCS is not possible, deforestation will not only need to be stopped, but reversed to create a massive terrestrial carbon sink of regrowing forest vegetation as our colleague Jonah Busch explains here.

As the IPCC report shows in Figure 3 below, avoiding dangerous climate change must require ridding ourselves of our fossil-fuel dependency and using energy more efficiently. We will need to see a tripling to nearly a quadrupling of the share of zero- and low-carbon energy supply from renewables, nuclear energy and other capture and storage technologies by 2050.

The IPCC concludes in its summary for policymakers that incentivizing upscales of low-carbon energy of this magnitude will require setting a price on carbon, whether through a cap-and-trade system or a carbon tax.

If and only if the true environmental and social cost of carbon is reflected in its price can we hope to see the deployment of cheaper and cleaner technology at a large scale. This is especially true for less mature CCS technologies. Investors need a clear and credible market signal that the time of fossil fuels is up. Given the long-lived nature and high costs of many of the infrastructures we use to produce energy, economies can get locked in to specific energy-supply patterns. But that lock-in can work in a positive direction too: adequately priced carbon can lead to a snowball effect where low-carbon technologies get deployed faster, cheaper, and on a larger scale.

The models in the report which project that the 2°C target is economically and technologically possible all crucially work on the assumption that (1) there is no delay in mitigation through 2030 and (2) the world sets a single carbon price. Not only is setting a carbon price a sine qua non condition for avoiding dangerous climate change, it will make the transition less painful.

The IPCC states that what matters for limiting warming is the stock of cumulative emissions, that is, total emissions since the beginning of the Industrial Revolution. This means the world has a “carbon budget.” The IPCC estimates that, in order to have a 66% chance of limiting warming to 2°C, the all-time carbon budget is around 2900 GtCO2. We have already emitted more than half of this (1890 GtCO2). Given that atmospheric real-estate is running out, it is a scarce and valuable resource. If countries agreed to assign property rights over this, using permits to emit, and to trade those permits among themselves, this would cost-effectively set a price on carbon. To be environmentally sound, the total amount of allowances in circulation on the market should be determined on the basis of scientific advice to not risk overshooting the 2°C target. And the allowances should be allocated on an equitable basis to not alienate the rights of poor countries. My colleague Owen Barder and I have been working on a proposal called SkyShares, which models the financial flows and costs of such a scheme, and we will be publishing our results soon.

Countries gathering at the 21st Conference on the Parties in Paris in year-end 2015 have agreed to come up with a binding international deal to limit GHG emissions. The 20th COP held this December in Lima will also be instrumental in setting the tone for what is likely to be achieved politically.

Avoiding dangerous climate change is affordable, but the only way to unlock the structural transformation that this report calls for is to set a price on carbon. And as this report has made starkly clear, we cannot delay action any further. The world cannot afford a re-hash of the Copenhagen debacle in Lima and Paris, or else +2°C will forever be out of reach.