It’s a worry for many people that legitimate cross-border transactions - including vital remittances sent home by migrant workers - are becoming prohibitively expensive and burdensome because of over-zealous enforcement of anti-money laundering rules.  Would cryptocurrencies such as bitcoin be able to help with this problem? The CGD Working Group on the unintended consequences of anti–money laundering policies is considering the scope of so-called blockchain technology to enable cross-border financial flows.

Adapted from an image from BTC Keychain on Flickr

The technology behind the latest generation of cryptocurrencies has made it possible to have a public, decentralised, secure ledger of all transactions on a payment network – in bitcoin this is called the ‘blockchain’.  This technology has the potential to make transactions over the global payments system, secure, inexpensive, and almost instantaneous. However, this technology can also make it easier to engage in money laundering, terrorist financing, and/or trade in proscribed goods and services. In seeking to control potentially harmful applications, it is imperative that policy makers do not stifle innovations in financial services. The way to avoid undesirable outcomes is to distinguish between separate uses for cryptocurrencies and to regulate carefully.

Can the cost of small volume cross-border transactions be lowered by using bitcoin as a ‘bridge currency’? BitPesa, for example, accepts deposits in bitcoin and makes payments in Kenyan shillings, charging 3% commission. For anyone who doesn’t already hold bitcoins, using a service like BitPesa implies the further cost of converting the currency of origin into bitcoin and the foreign exchange risk of holding the volatile cryptocurrency for as long as it takes to complete the trade. This can incur significant costs in many markets.  Some organisations, such as Coinbase, are attempting to drive down these costs by creating efficient exchanges between bitcoin and major currencies like the US dollar.

A more elegant solution has been proposed by a company named Ripple and is now under development by them and an off-shoot company called Stellar.  The Ripple transfer protocol is a payment protocol based on a distributed ledger of transactions like bitcoin’s Blockchain. It is not designed to be used by end consumers. Rather, Ripple is designed to be accessed via ‘gateways’ such as banks and functions as settlement infrastructure at the foundational level of a payments system: 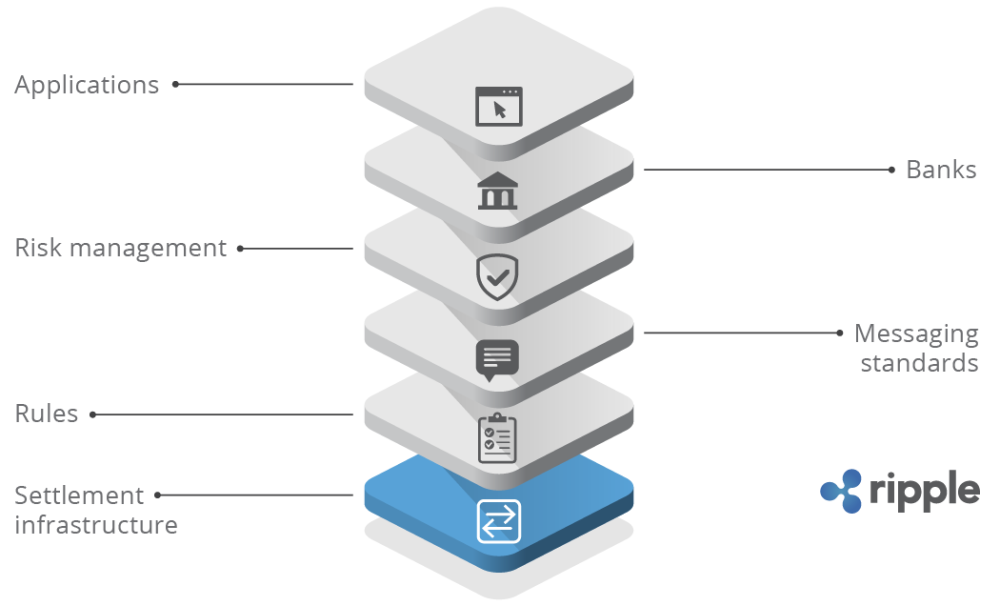 Ripple is currency-agnostic. By incorporating a competitive foreign exchange market into the protocol, Ripple allows users to hold balances in one currency and pay in another. A cryptocurrency called Ripples is only used behind the scenes as an optional bridge currency.   This type of technology may help to grow the global remittance market and to facilitate small-volume trade and NGO transfers.

As third parties involved in centralised clearing and settlement are also responsible for regulatory functions, this could risk a lack of regulatory oversight. So, Ripple restricts access to its payments system to gateways such as banks, bringing the regulator back into the picture.

Bitcoin, however, is a decentralised payments system designed to be accessed directly by end users; as such it facilitates anonymity. The implications of this have been demonstrated by the proliferation of ‘deep web’ marketplaces accepting payment in bitcoin for legal and illegal goods and services. It is therefore reasonable to think that many regulators could seek to restrict the ability to convert centrally-issued currency or other stores of value into cryptocurrencies, as in Russia and China. This may or may not be effective.  More importantly, regulators must not confound the use of a cryptocurrency with the use of the blockchain technology that underpins it. What is imperative is that regulators not squander the potential benefits of blockchain technologies when containing the risks.  These technologies have vast potential to improve the financial system, while preventing money laundering and other illicit activities.