How Will the Financial Crisis Affect Aid to the Health Sector?

In a blog posted last October, David Roodman here at the CGD showed that total aid flows from some of the more generous donor countries have declined in the years following a financial crisis. Check out his gorgeous graphics which were picked up within days by the Washington Post. While we don’t yet know whether this pattern will recur in the present financial crisis (see blogs by Shanta Devarajan and a recent update by David) , the OECD’s March 30 announcement that development aid in 2008 was at its highest level in history is certainly consistent with aid rising during a financial boom.

For the purpose of this blog, let’s assume that total aid flows to developing countries move in the same direction as donors’ economic growth – and therefore might decrease in the next few years. Here I address the question of how changes in total aid flows are distributed across the sectors. Do some sectors benefit more than others on the upswing? And what about on the downswing?

To quantify this question, let’s ask by how many percent donor funding to the health sector will rise or fall when total aid funding rises or falls by ten percent. The ratio of two percentage changes is called an “elasticity”. One possible outcome is that all sectors would rise and fall together, always retaining their shares of the total aid pie. A ten percent rise (decline) in total aid would be accompanied by a ten percent rise (decline) in all aid components. In this case the elasticities of all the sectors in both directions would all be the same and equal to 1.0.

Even without looking at the data we can think of many reasons why this would not be likely. For example, aid to some sectors might be perceived by donors as a “luxury,” while aid to others is a “necessity”. Just as consumers have high income elasticities (greater than 1.0) for luxuries and low elasticities (less than 1.0) for necessities, donors might have larger elasticities for some sectors and smaller ones for others. The share of total aid going to a “luxury sector” would rise during an upswing and fall during a downswing. The reverse would be observed for a “necessity sector” with an elasticity less than 1.0.

What do we find in reality?

The following figure contains two bars for each sector, a bright cheerful blue bar for upswing elasticities and a sickly green bar for downswing elasticities. The height of a bar represents the magnitude of the corresponding elasticity estimate, for which the numerical estimate can be read from the bottom edge of the figure. The horizontal line at 1.0 discriminates between responsive donor reactions to total aid changes (above the line) and unresponsive donor reactions (below the line). 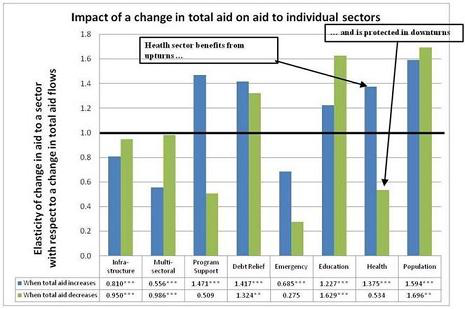 Before looking specifically at the health sector, let’s look at a few of the others that I have included for comparison. According to these results, the amount of aid flowing to “Infrastructure” is closely tied to total aid flows. Both the upside and the downside elasticities are close to 1.0 and close to one another. These elasticities suggest the sector’s share has slightly eroded during upswings, but held its own during downswings. The next two sectors, “Multi-sectoral” and “Program Support” both have highly unequal blue and green bars, but in opposite directions. The “Multisectoral” component of aid, which captures explicitly cross-cutting projects, has risen slowly while losing share during an upswing, but then has kept its share on a downswing, declining at the same rate as overall aid. Thus over a series of upswings and downswings, its share of total aid would ratchet downward.

The “Debt Relief” and “Emergency” sectors make an interesting comparison. “Aid for “Debt Relief” addresses a long-standing structural problem, which develops slowly and then gains urgency over years or even decades. In contrast, “Emergency” aid is in response to a disaster, and typically to a surprising one, like a tsunami or a drought. The results suggest that donors’ allocations to “Debt Relief” are treated as luxury expenditures, with aid flows for this purpose rising faster than total aid, and then collapsing at times of a downswing in total aid. (Both elasticities exceed 1.2.) The opposite is true for “Emergency” aid, which seems to be viewed by donors as a “necessity”. It responds only weakly to upswings in total aid and even more weakly to downswings. The “Emergency” sector comes closest of any in our data to being insensitive and unresponsive to total aid fluctuations.

Now let’s turn to the social sectors. The results provide comfort to advocates of aid to the health sector, but are discouraging to advocates of either education or population. All three of these social sectors have elasticities greater than unity during upswings in total aid. In other words, during the period of this data (and subject to its limitations), all three of these sectors have gained share during upswings in total aid flows. Their elasticities during an upswing are 1.2, 1.4 and 1.6 respectively. However, the picture is very different during a downswing. Whereas both “Education” and “Population” are estimated to lose share during a downswing at an even faster rate than they gained during the upswing, the reverse seems to be true for the “Health” sector. According to these estimates, a drop in total aid of 10 percent would reduce health spending by only 5.3%, leading to a net gain in health’s share of total aid. Thus, the “Health” sector appears to be like the “Program Support” sector, gaining share relative to other sectors during the upswings, and also gaining share during the downswings, thereby ratcheting up its share over repeated aid cycles.

The strong showing of the health sector in this statistical analysis may be an artifact for a variety of reasons. First, the DAC data I used for this analysis is spotty with a lot of missing observations. Second, the patterns observed for any sector during the period 1990 to 2003 may fail to predict donor behavior during the next five years. Third, the results for individual sectors depend on the definition of “upturn” and “downturn”, on the magnitudes of these fluctuations observed before 2003 as well as on other details of the statistical analysis. If the current financial crisis generates a downturn in total aid that exceeds anything yet observed, historical patterns may fail to predict the future.

In the discussion to this point, I have treated the “Health Sector” as a single homogeneous recipient of aid. Elsewhere I have argued that AIDS treatment differs from all other health aid in endowing patients in poor countries with an entitlement to future support. But this effect could not have been a large contributor to the small elasticity of health aid with respect to total aid in the period 1990 - 2003, because donor support for AIDS treatment only took off in 2003. So it is reasonable to speculate that the downward stickiness of “Health Sector” aid prior to 2003 will be enhanced by the increasing share of AIDS treatment entitlement in the total aid to the sector. The downward elasticity of the total sector in the future might thus be much smaller than 0.5.

These results provide some initial ideas about what we might expect if total aid flows diminish as a result of the crisis. Advocates for foreign assistance can hope that, and actively lobby for, a sustained level of total foreign assistance, which would obviate the need to worry about how the pain of a shrinking pie would be apportioned. 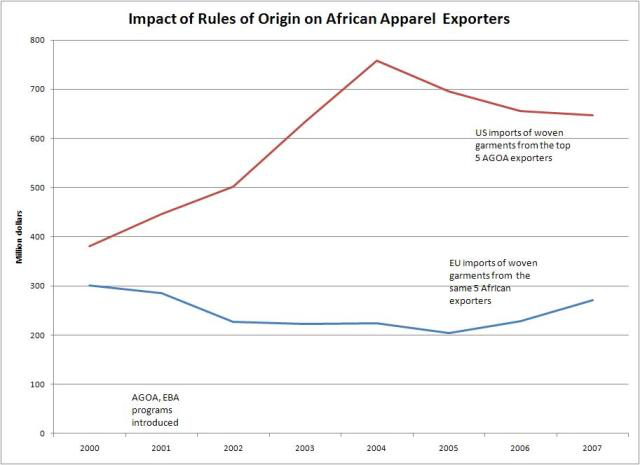 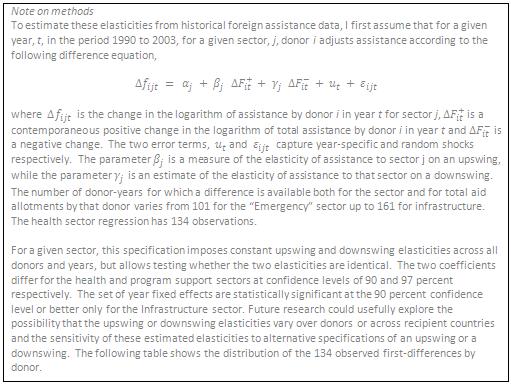 Blog Post
The White House and the World: Practical Proposals for...
Scott Morris and Erin Collinson