When Rukmini Banerji, CEO of Pratham, received a call from a civil servant in Bihar about the chronic problem of student absenteeism, she had an idea. Could absenteeism be caused by the poor learning taking place in classrooms? After all, with years of schooling without gains in basic foundational skills in reading and math, it was hardly surprising that children in Grade 5 were struggling with the highly advanced “Grade 5” content in their textbooks. One result of the mismatch between student ability and curricular content: teachers were demotivated; children were simply uninterested; parents did not see much value in schooling; and ultimately, attendance was subpar.

What would happen if children were taught by their actual learning levels rather than their grade? This idea began a learning experiment in Bihar that highlights the problem of mismatched curriculums in education systems.

The intervention began in Jehanabad, a relatively small district of Bihar with around 700 schools. Students from Grades 3, 4, and 5 were assigned into different learning groups based on simple assessments. Using new methods and materials, teachers taught each group at their skill level in a special class during the afternoon session of the school day. Based on improvements in learning level, children could move to a different group.

The first visible sign of improvement was the higher attendance levels. Whereas attendance “melt” after the morning session and the mid-day meal was pervasive before, children now stayed into the afternoon. 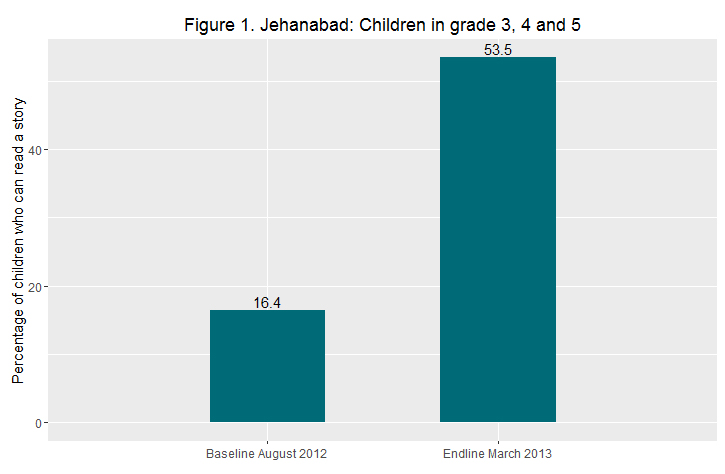 Jehanabad saw a 37.1 percentage point increase in the number of children who could read a story at Grade 2 level in a span of eight months. This marked progress offers potential insights into ways to steepen the learning profile.

Figure 2 overlays the progress in Jehanabad (shown by the horizontal dotted lines) on the regular learning profile of Bihar created from ASER 2014 data for percentage of children who can read a Grade 2 level story. 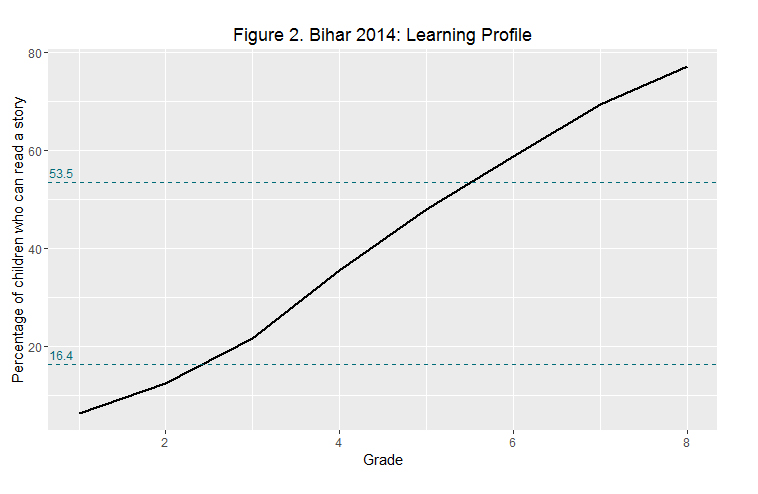 The numbers speak for themselves: Jehanabad’s increase in story readers from 16.4 percent to 53.5 percent in eight months of teaching at the “skill-level” rather than “grade-level” is equivalent to almost three years of “regular” progress in Bihar.

A similar trend was found in another intervention in East Champaran, one of the biggest districts of Bihar, where the number of children who could not read simple words more than halved in five months. As the success in Jehanabad and East Champaran got increased visibility, the government of Bihar launched Mission Gunwatta in 2013. A major aim was to improve basic reading and math skills across schools in Bihar. Out of 38 districts in Bihar, 12 districts—reaching 1.64 million children—decided to partner with Pratham and focus on improving learning by teaching at the right level.

The experiment in Bihar does not make claims about causal inference. There was no randomization or control group. However, past randomized controlled trials (RCT) assessing the effectiveness of Pratham’s methodology focusing on building basic skills through groups organized by ability in Uttar Pradesh, Bihar, Uttarakhand, and Haryana have shown promising gains in learning. Another RCT in Kenya (Duflo, Dupas & Kremer, 2008) shows that random assignment of students based on initial achievement benefits all students by allowing teachers, who otherwise may have incentives to teach to high-performing students, to teach at the right level. Other research has also provided evidence for how curricular mismatch in education systems can contribute to the shallow learning profiles in many developing countries. A 2012 paper by Lant Pritchett and Amanda Beatty shows that students learn the most when instructional level is in alignment with student skill. The Bihar experiment brings to the fore the effect of overambitious or misaligned curriculums on overall learning gains.

While the strong focus on universal enrollment over the last few decades has led to more children going to school and staying there longer, their learning gains are far from sufficient. Switching from thinking about inputs to learning outcomes has challenged the age-old assumption that schooling leads to learning.

The message from the Bihar experiment is clear: In order to overcome hurdles in improved learning, structural changes in the organization of teaching and learning are necessary. As a first step, this would require education goals focusing on mastery of basic literacy and numeracy skills.

Learning for All, Research on Improving Systems of Education