The Macroeconomics of Pandemics Around the World
Ingvild Almås et al.
October 20, 2020

Governments around the world have taken drastic measures to control the spread of coronavirus. Public debate has understandably focused on the differences across countries; however, there has been surprising uniformity in the severity of lockdowns and other containment measures between rich and poor countries, as data from Oxford University’s “Stringency Index” shows (Figure 1). This fairly homogenous lockdown strategy has spanned much of South Asia and Latin America, which have been ravaged by the pandemic, and many countries in Africa, which appear to have contained it quite effectively.

Figure 1. In the first half of 2020, rich and poor countries put in place similarly stringent measures 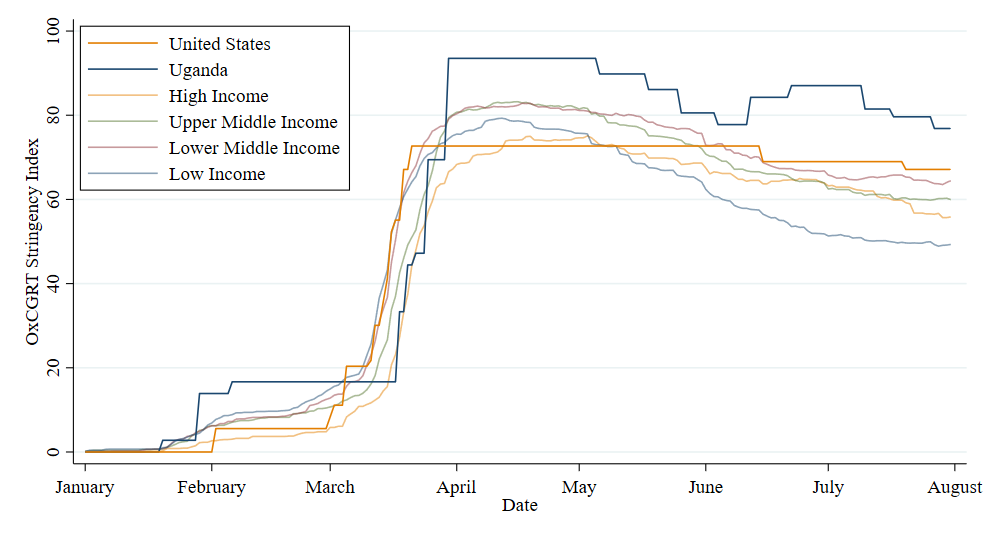 Economists in the rich world have largely supported stringent containment measures, rejecting any trade-off between lives and livelihoods. In the United States, for instance, a survey in late March 2020 found zero leading economists disagreed that the policy response to the pandemic should involve “a very large contraction in economic activity until the spread of infections has dropped significantly.” For the developing world, however, economists have expressed reservations about similar policy prescriptions: for example, see here, here, here, or here.

Why trade-offs look different in the developing world: Higher poverty and a lower probability of death

In a new working paper, we explore two factors that may lead economists to produce very different conclusions about the wisdom of lockdowns for rich and poor countries: the infection fatality rate (IFR), which incorporates the effects of demography, comorbidities, and health system capacity; and poverty, which affects people’s ability to trade-off consumption today for reduced infection risk. Building these economic considerations into a textbook epidemiological “Susceptible-Infectious-Removed” or SIR model, we suggest that the rather uniform lockdowns across the global spectrum of per capita GDP are hard to rationalize given different contexts and constraints across countries.

Strict lockdowns in countries where a significant share of the population is poor are likely to have more severe consequences on welfare than in richer countries. From a macro perspective, any negative economic effect of a lockdown is reducing a budget with already fewer resources in a poor country—for instance, GDP per capita in our example of a low-income country, Uganda, is close to 1 percent of the value for the United States. From a micro perspective, households already close to subsistence with e.g., no storage of food and other resources, will bear large welfare costs from being limited in their movements and possibilities to generate income.

Countries at different stages of economic development differ greatly not only by their income, but also by the fatality risk the novel disease brings. As we discuss in a previous blog post and this paper, the share of infected that die from the disease—the IFR—may be significantly lower in poorer countries. Our estimates suggest an IFR that is less than half as high in Uganda as in the US (0.3 percent vs 0.8 percent). Indeed, recent seroprevalence studies in developing countries have found high rates of antibodies. Given these, official death counts would have to underestimate the true figures by an unrealistically high factor in order for the virus to be as deadly there as in richer countries.

The macroeconomics of pandemics in poor countries

In our study, we explore how differences between rich and poor countries’ income and IFR affect the optimal response to an outbreak. We adopt and extend a recent paper by Martin Eichenbaum, Sergio Rebelo, and Mathias Trabandt. They incorporate a traditional SIR model from epidemiology into a simple economic model of consumption and labor supply: households weigh the risks of infection and decide how much to venture out into the marketplace to work or consume, which exposes them to the disease. This framework predicts some degree of economic contraction during a pandemic due to spontaneous social distancing, as people voluntarily reduce consumption and work.

On top of this, the model allows for policymakers to introduce a kind of tax that further reduces transmission, but also decreases economic activity, which we refer to as the containment rate. Policymakers face a trade-off between higher infection rates (which leads to lower productivity and more deaths) and the welfare costs of reducing the economic activity through lockdown policies.

Calibrating the model to the United States (an example of a high-income country) and Uganda (an example of a low-income country), we find that lower incomes and lower fatality risks weaken the case for strict lockdowns in poorer compared to richer countries. Relative to richer countries, any given reduction in consumption is less efficient but more costly in developing countries: it hurts people that are poorer to start with more, and—because of the lower fatality rate—has a smaller effect on reducing the number of deaths.

The figure below shows how both factors, lower IFRs and poverty, contribute to this result as we move from our US scenario in the top left—based on US levels for incomes, IFRs, and the “value of a statistical life” (which we discuss more below)—towards our Ugandan scenario in the bottom right. As we show in the paper, this finding is very robust: the qualitative difference in recommended policies remains even when we account for the possibility of much higher IFRs in Uganda because of health systems becoming overburdened. We also show that applying the optimal containment policy from the United States to Uganda would do less to avoid deaths in the latter, because people cannot adjust their consumption as much.

Our analysis abstracts from a number of other important differences between rich and poor countries. In a closely related paper, Titan Alon, Minki Kim, David Lagakos, and Mitchell VanVuren show how some of these factors would likely further weaken the case for strict lockdowns: e.g., a much smaller share of jobs in developing countries can be done from home, and governments have less fiscal space and tools available to get money to their citizens.

Figure 2. How much would an optimal lockdown reduce consumption (blue) and how many lives would that save (red)? 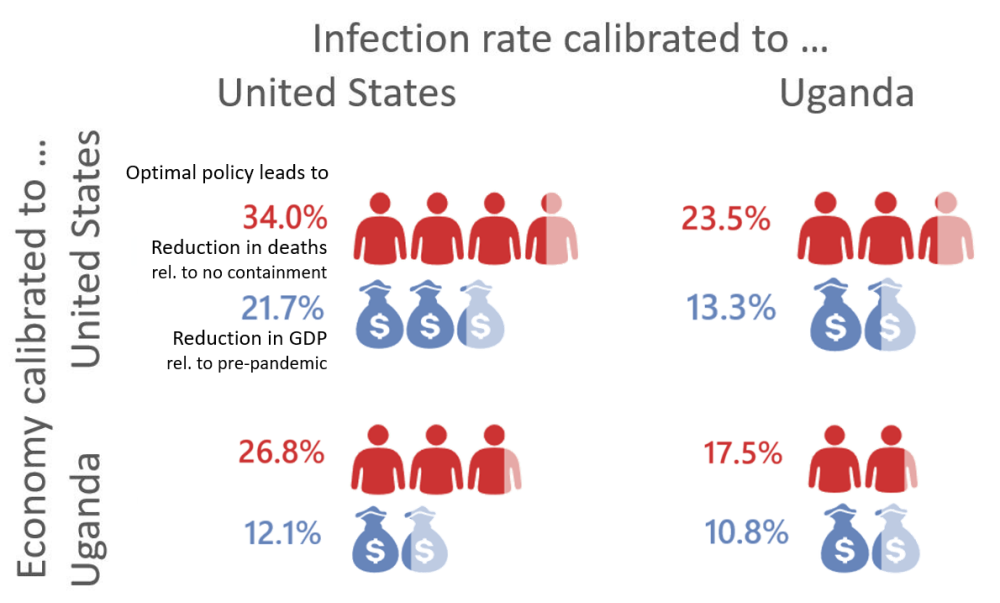 Note: The figure summarizes the effects of welfare-maximizing policies through the lens of our model. In red, the deaths that are avoided through the “optimal” lockdown, as a share of the number of deaths the epidemiological predicts without any containment measures. In blue, the reduction in GDP over one year that the social planner should “optimally” incur to avoid those deaths.

The value of a statistical life

An important input into most economic analyses of pandemic control measures, including ours, is the monetary value placed on avoiding a death from COVID-19, known in economics literature as the “value of a statistical life” or VSL. This value is commonly measured by observing how much people are willing to pay to reduce their risk of dying from a given cause. For instance, Michael Kremer, Jessica Leino, Edward Miguel, and Alix Zwane infer a VSL of about $769 in rural Kenya by observing people’s willingness to travel to (life-saving) safe water sources, and Koichiro Ito and Shuang Zhang  estimate a VSL of $455 per year in China based on people’s willingness to pay to install air purifiers. Even after adjusting for differences in GDP per capita (assuming a unit elasticity, as Ito and Zhang suggest), VSLs used in government deliberations in the United States are between 35 and 140 times bigger than those.

These low VSL estimates from field experiments in developing countries do not reveal different preferences about risking death per se. We take it as axiomatic that individuals and policymakers in developing countries find a life equally precious as their counterparts in richer countries. Nevertheless, in field experiments and real-world policy decisions they still show a substantially lower willingness to pay to reduce the risk of death. What we as economists call “willingness to pay”, most people would simply call ability to pay. For poor households, reducing consumption to lower their exposure to one source of risk (e.g., coronavirus infection) may increase exposure to other, equally life-threatening risks (e.g. food insecurity). For governments in poor countries, tight fiscal constraints leave little wiggle room to redirect spending to protect both citizens and the economy. The IMF notes that advanced economies have spent over 7 percent of GDP on stimulus measures in 2020, while low-income countries have mustered only about 1 percent of much-lower per capita GDP levels. This inability to cushion the shock of a strict lockdown implies households and governments face real trade-offs.

In the paper, we run our calculations with a broad range of VSLs for developing countries, up to $220,000, and find qualitatively similar results about the relative stringency of lockdowns implied for developing and developed countries. Figure 2 above is computed with a VSL of $86,000, scaled with unit elasticity from the US reference value.  We emphasize that our model only captures deaths from COVID-19, not from other reasons, such as poverty or missing out on healthcare. Allowing for deaths from other reasons than COVID-19 that can be directly linked to containment measures would further weaken the case for lockdowns.

Since the start of the pandemic, governments and the public around the world have learned a lot about how to deal with this novel disease, and smarter approaches to containment are being developed. Going forward, our work highlights that, especially in contexts where households have few options to buffer periods of low income, approaches protecting both lives and economic activity are desirable. Lockdowns are not a “one size fits all” solution but must be carefully adapted to country-specific risks and needs.