The Panama Papers and the Correlates of Hidden Activity

Unless you’ve been living under a rock in the British Virgin Islands, you might have heard of the massive leak of documents from Mossack Fonseca, a Panamanian law firm whose services included helping its clients create shell corporations and store their assets in offshore tax havens. The International Consortium of Investigative Journalists (ICIJ) and their affiliates recently began releasing juicy details on politicians and other people in positions of power who appear to have been using the firm to manage their offshore finances.

The Irish Times and the ICIJ were kind enough to share with me some initial aggregate data on the number of intermediary companies, clients, and beneficiaries named in the leak which can be tied to a given jurisdiction by address. The result is a rough mapping of the countries linked to Mossack Fonseca throughout its forty year history in the offshore business.

In addition to a torrent of political scandals and crises, the leak has resulted in a renewed rallying cry to reform the international tax system. But aside from the political implications, the Panama Papers have the potential to help us better understand two things:

I wanted to see if popular measures of financial secrecy, money laundering risk, and corruption that development policymakers, advocacy organizations, and regulators rely on were any good at  predicting the number of business relationships with Mossack Fonseca. First controlling for average income and total population size, I looked at correlations between these indicators and the total number of companies, clients, and beneficiaries that appeared in the Panama Papers (the results are the same looking at each type of entity separately).

The short answer is that some indicators – specifically those focused on secrecy – are actually pretty good predictors of which countries are likely to do business with a dodgy law firm that specializes in offshore finance. The graph below shows the results across all the indicators that I tested. All indicators have been transformed so a higher value is a “worse” outcome, such as a higher risk of money laundering or corruption. Each point shows the change in the log value of total links to Mossack Fonseca for a one unit change in the indicator, controlling for per capita GDP and the country’s population. 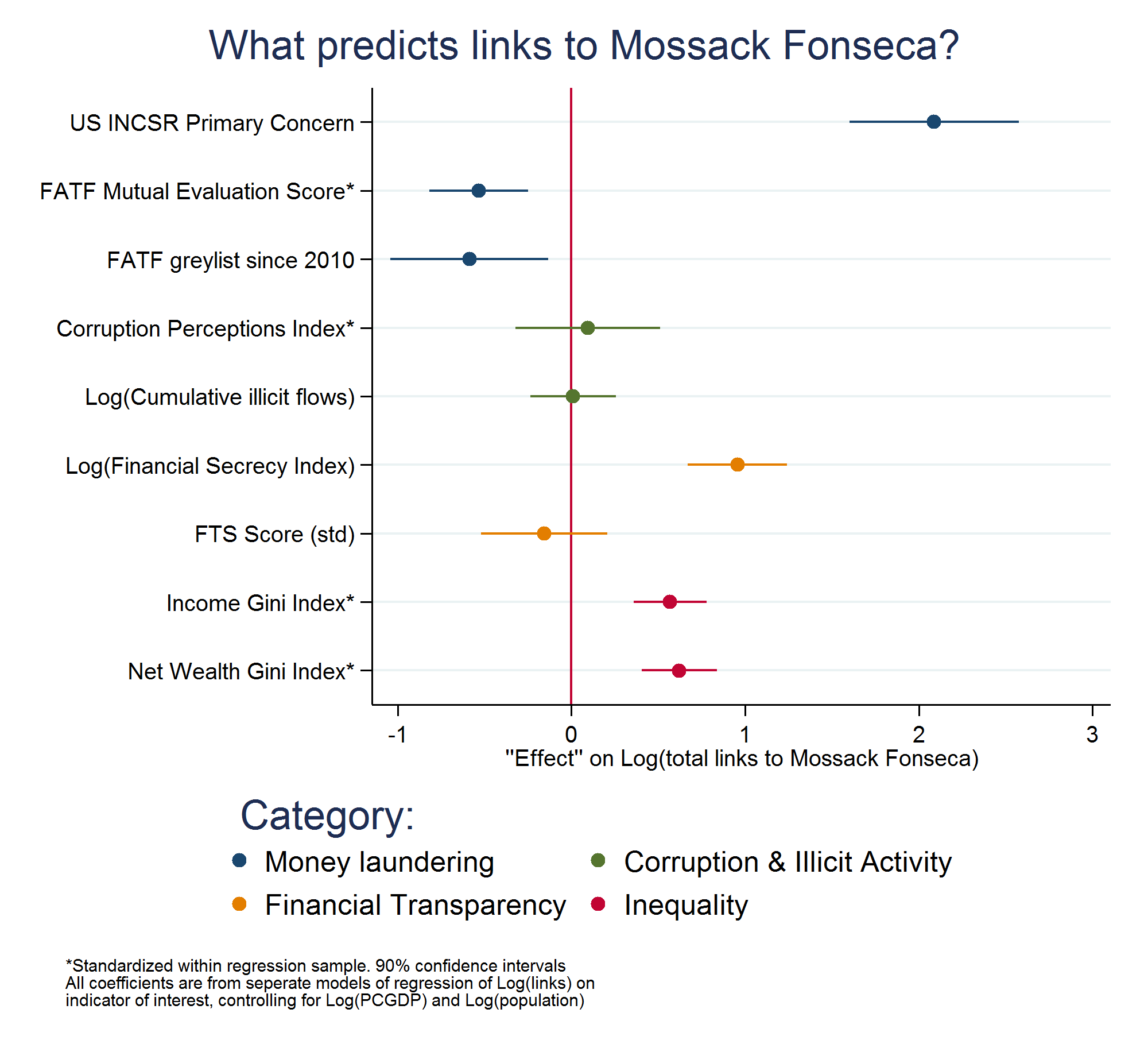 One of the most reliable predictors of a country’s dealings with Mossack Fonseca is how it scores on the Financial Secrecy Index (produced of former-CGD taxation guru Alex Cobham) which is used to assess the risk that a jurisdiction is used to hide a significant share of money in the global economy. A 10% increase in a country’s FSI is associated with an approximately equivalent increase in the number of entities from that country named in the Panama Papers. A one standard deviation increase in the FSI – roughly equivalent from moving from Norway to Jersey – leads to about a 90% increase in the the number of entities. Other measures carry less predictive power: there is no obvious relationship between an index of Financial Transparency and Standards produced by the Basel Institute on Governance and the number of links.

Mossack Fonseca might have avoided countries with weak AML regimes, but courted those with actual money laundering problems.

One ongoing concern is that Mossack Fonseca wasn’t just helping people avoid tax, but it was also facilitating money laundering or helping clients duck international sanctions. One way to judge money laundering risk is to rely on recommendations from the Financial Action Task Force,  an international standard-setter charged with assessing the quality of every country’s anti-money laundering (AML) regimes. Through extensive mutual evaluations and the naming and shaming of countries who have not made sufficient progress in reforming, the FATF sends signals to financial firms and regulators to be wary of certain jurisdictions.

On the surface, Mossack Fonseca appears to have heeded those signals, as the firm has relatively fewer links to countries which have a poor mutual evaluation score or have recently been on its list of high risk territories. But if we consider jurisdictions which law enforcement specialists believe have an actual money laundering problem, the picture gets a lot bleaker. Countries that end up on the US State Department’s annual list of jurisdictions of “primary concern” for money laundering (a list including both the UK and the US) had approximately 200% more named entities in the Panama Papers.

Popular measures of corruption and illicit financial flows don’t tell us much about offshore activity.

Corruption is often seen as driven of illicit financial outflows (IFFs) from developing countries to places where stolen money can be hidden. Some regulators have even gone as far as using popular measures such as Transparency International’s Corruption Perceptions Index (CPI) as an indicator of money laundering risk. But neither the CPI nor other similar measures of a country’s corruption consistently predicts links to the Panama Papers. Similarly, "direct" measures of IFFs, Global Financial Integrity’s measure based on trade and balance-of-payments-data, are almost entirely uncorrelated with a country’s links.

It is probable that this relationship is more structural than causal – more unequal nations will have more top-income earners eager to avoid tax. For the countries which are obvious tax havens, inequality is a likely consequence of dependence on financial services. To the extent that our measures of inequality leave out offshore funds, places already considered to be very unequal are likely to be even worse once we account for hidden wealth.

As more data comes out, we stand to learn even more.

These results should be taken with a grain of salt. This data is preliminary and so might change as more is uncovered in the future. Furthermore, it is coming from a single law firm whose client base and activities are probably not entirely representative of the offshore financial sector as a whole. Finally, because of the level of aggregation of the data, the firms and beneficiaries listed here are likely to be a mix of entities seeking offshore access and firms already based in offshore jurisdictions. Thus these results are likely to conflate the sources of hidden cash and the final destinations of that money.

That said, the Panama Papers story is still unfolding and the ICIJ plans to release a more extensive list of companies involved with Mossack Fonseca next month. As more data becomes available, we stand to learn even more about whether or not the measures we use to determine the likelihood of both developing and developed countries to be facilitating money laundering, illicit financial flows, or tax avoidance actually reflect what happens in the offshore world. Given that these indicators provide the backbone for discussion around these issues, it’s crucial we test them every chance we get.

Thanks to Brian Kilmartin at the Irish Times for sharing the data.