Using research to inform policy often involves reading scientific articles in costly books and journals. But for some policymakers and analysts these costs may be prohibitively expensive, leaving them without access to critical information. In fact, a recent op-ed in The New York Times suggests researchers had identified the Ebola virus in West Africa in the 1980s, but that journal paywalls are partly responsible for preventing that information from being accessible to local and international experts.

So exactly how expensive is accessing published research for users in developing countries?  We decided to find out.

As a benchmark we traced all 45 references from an important policy report, the first chapter of the World Development Report 2012: Gender Equality and Development, and calculated how much it would cost (legally or otherwise) to access these materials. The premise is that this is what an interested reader should be able to do. 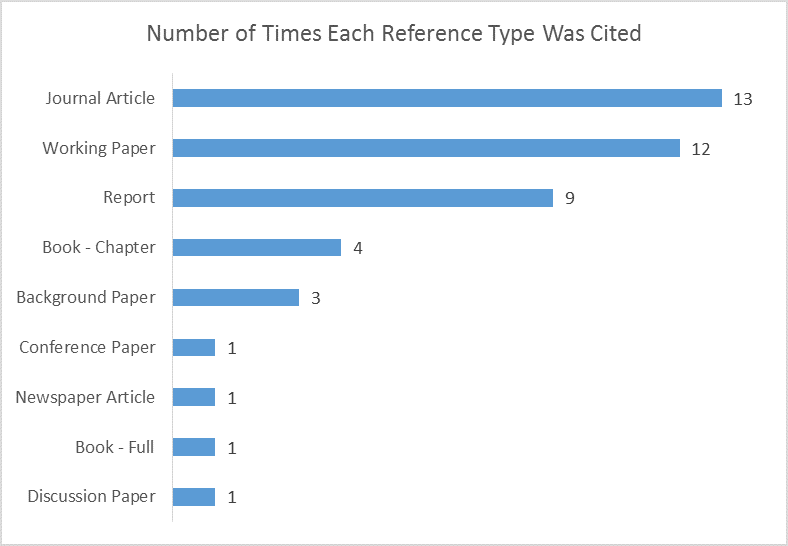 At least some articles in fee-based journals are freely available online if you look hard enough.  So we decided to use two prices for the articles: the “de jure” price you would pay for purchasing the article and the “de facto” price you would pay if you spend a few minutes searching. We calculated the de facto price as zero if we could easily find the article outside of a paywall. While this is clearly an underestimation of what it costs to access the average article, it also reflects reality. We used a similar approach for books and reports, where we used the most and least expensive prices we found in a quick Google search. Mind you, these prices are for new books but do not include shipping costs.

Here’s what we found: the most expensive but fully legal way to access all 45 references in chapter 1 of the 2012 WRD from the United States would cost around $630 and the least expensive way would cost $420. That corresponds to an average cost of $14.05 and $9.28 per reference. Book-based references are the most expensive with an average price between $34 and $39, followed by journal articles at almost $18, considering only the cheapest options and including items that are available for free.

We also considered two common responses to this. First, to check whether publishers charge lower prices for users from a low- or middle-income country, we collected prices seen by users in India.  The prices were generally similar to those for US users. Second, nowadays you can find often find working paper versions of published articles. But working papers are meant to evolve and hence may be quite different from the published and presumably final version. And many publishers ask authors not to publicly post the final versions.

The bottom line is that accessing existing research can be expensive. It’s hard to say whether it is prohibitively expensive to users in developing countries, but chances are that, on the margin, they might forego paying for an article that could have been informative and useful. One of the early research articles on Ebola in Liberia seems to cost $31.50 to download. Without paying that price you only get to preview the first page and there is no abstract, so it’s hard to know if scarce money would be well-spent on this particular paper.

The good news is that some changes are happening.

A handful of organizations such as the National Institutes of Health and the Gates Foundation now require that research articles they fund are made publicly available immediately or shortly after publication. Similar to open-access journals this might involve some costs for the submitting authors, but at least readers don’t have to pay.

There are also initiatives such as Research4Life and Highwire’s Free Access to Developing Economies that are tackling the fees issue for developing country users. Research4Life provides free or discounted access to peer-reviewed content on food, agriculture, environmental science, health, and technical information. Prices are dependent on a country’s Human Development Index score, their Gross National Income, or their inclusion on the United Nation’s list of less developed countries. Highwire, on the other hand, offers similar content (plus a few journals on economics, refugee studies, and philosophy) for free to anyone in a country listed by the World Bank as a low-income economy (as well as a few other countries).

Notwithstanding these good efforts, there is room for improvement. Initiatives should continue to expand access to articles in research areas they already cover while also moving to provide access in new areas, including social science and policy research. In addition, we should think more generally about how to encourage publishers to provide access to developing country users.

Our back-of-the-envelope calculations show that costs are still high and possibly prohibitive. Academics and library systems in high-income countries have been outraged by the high costs for fee-based journals. Meanwhile, developing country users have shallower pockets. Research is often characterized as a public good — now it’s time to make it one.