Price Spike Caused by Ukraine War Will Push Over 40 Million into Poverty: How Should We Respond? | Center for Global Development | Ideas to Action Skip to main content

Price Spike Caused by Ukraine War Will Push Over 40 Million into Poverty: How Should We Respond?

Russia’s invasion of Ukraine has sparked significant rises in energy and food prices. Our analysis suggests the scale of price spike will push over 40 million into extreme poverty. In this blog, we look at the outlook for commodity prices as well as the significant implications for hunger and poverty, and consider how policymakers should respond.

The G20 and other grain producers must keep markets open and avoid sanctions on food, even if further disruptions arise, to avoid artificially exacerbating the impacts. Governments and international agencies will need to act quickly and generously to anticipate and support humanitarian needs—but they should also use the crisis as an opportunity to reform agricultural policies in the EU and US that are undermining food security.

Impact of past food price spikes

Consumers are unambiguously made worse off by spikes in food prices. World Bank researchers estimated the 2007 spike may have pushed up to an extra 155m people into extreme poverty with separate work suggesting the 2010 surge had the same effect on 44m people. Price increases seen to date are already of a similar magnitude to the 2010 increases, and our analysis suggests at least 40m people will be pushed into extreme poverty by the 2022 price spike.

Farmers do benefit from higher output prices, although these will be offset by higher input prices, in particular those of fertiliser and energy; and in low income countries many farmers are actually net buyers of food.

Price drivers and policy lessons on agriculture and trade

Russia and Ukraine export 19 percent and 10 percent of globally traded wheat respectively. Prices of key agricultural inputs are also soaring, with Russia and Belarus accounting for a sixth of world fertiliser exports, oil hitting its highest levels in 10 years, and gas prices already elevated. Ukrainian planting for the autumn harvest is reported to be disrupted and its Government has forbidden many food exports (including wheat). The sanctions on Russia will also make export more difficult. The impact of this all remains to be fully seen—but although futures prices have fallen back in recent days, they remain up some 50 percent on six months ago.

There are lessons to be learnt from the 2007 price spike. As then, rising energy prices are pushing up input costs, and pressure is being exacerbated by concerns about production and stock levels (see below), but arguably the key driver of the 2007 spike was export bans. This is a key lesson, illustrated by what happened in rice markets:  global prices doubled even in the absence of any real-world production issues as India and Vietnam banned exports. For other major producers outside of Ukraine, keeping trade open is crucial to enable farmers to respond, as is avoiding sanctions on food and fertiliser.

Hungary’s knee-jerk export ban shows exactly what not to do although  this will have little impact on global supply. Politicians and policymakers need to resist political pressure, and explain the value of collective openness.

Frustratingly for policymakers, their options for actions that genuinely help are limited. There is a case to relax “biofuel” mandates (a requirement to include food-based energy in fuel) but high energy prices mean this is unlikely to make a big difference. There are also calls to temporarily lift some environmental standards on land set-aside for biodiversity—but even if desirable these are unlikely to add much to alleviate current supply issues.

A second key lesson for policymakers is to ready themselves to navigate further shocks—including climate-related shocks. The G20’s initiatives on improved data AMIS (on traditional info) and GEOGLAM (on satellite data) have improved crop monitoring over the past decade and should enable policymakers to be ready for any further supply disruptions which emerge. It is early in the northern hemisphere’s wheat season, but there are some concerns about production (see yellow below) and although Chinese officials suggested (current) winter wheat conditions may be the “worst in history” the summer harvest appears much more promising. 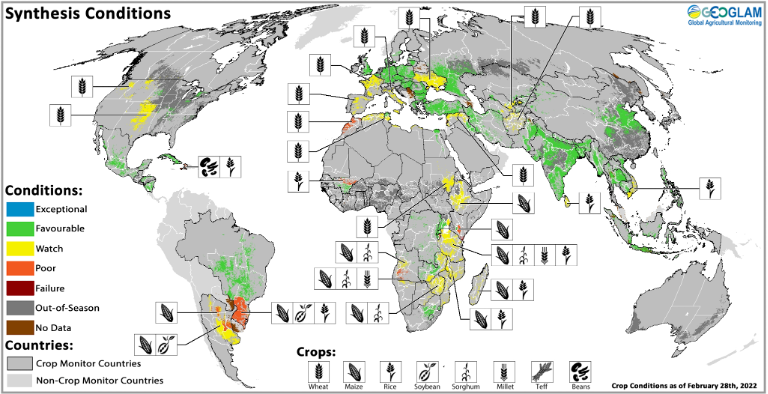 The G7 have called for open markets and, at the coming G20 meetings, policymakers should make a genuine collective commitment to keeping food export markets open and sharing information on stocks and logistics, to ensure that producers can respond.

Where will the impacts of this crisis fall hardest? Though closed economies generally tend to face greater food insecurity, in this case the invasion of Ukraine will have more severe immediate impacts on those dependent on global markets.

Although immediate concern has been for the bilateral export destinations of Russian and Ukrainian cereals, particularly Egypt, the impact of the shock will be felt widely, as importers switch their sources of supply, pushing up prices. Attention should be paid to countries most dependent upon imported wheat and corn: at least 24 low and lower-middle income countries imported more than 50kg of wheat or corn per person in 2018, according to FAO data (a significant level: assuming ~3500 calories per 1kg of grain, this is equivalent to depending upon imports for almost 500 calories a day).

Amongst importers, vulnerability to the impacts of rising global grain prices will largely depend upon poverty. Households from poorer countries spend much more of their income on food, with families in low-income countries allocating almost half (45 percent) of their budgets to food. The lower discretionary income of poorer households limits their ability to maintain food consumption by cutting back on other expenditure, and creates hard choices between food and other necessities.

Distributional issues within countries can also leave people more vulnerable to price spikes, and food safety nets—whether in-kind or via food vouchers, cash transfers or school meal programmes—can help protect those likely to be worst impacted. Analysis by the Economist Intelligence Unit found that poorly-functioning food safety nets are associated with higher rates of malnourishment and stunting in children; yet their Global Food Security Index identifies 32 countries whose food safety net programmes lack funding, have limited coverage, and are dependent on non-government support (or else are missing altogether). “The expansion of social protection is urgent,” argues the World Food Programme. For policymakers in low-income countries, expanding the coverage and generosity of social safety nets will be key.

Policymakers should also be attentive to the cumulative effects of multiple crises, which R. H. Tawney once likened to a proverbial man being already so far submerged in water “that even a ripple is sufficient to drown him”. Several countries are already suffering acute food crises; while others are facing down the economic impacts of covid-19, which may limit their capacity to respond to new crises.

Development agencies and international finance institutions should move now to respond to a clear increase in humanitarian needs. The World Food Programme alone is expecting its costs to rise by some $850m this year. High-income governments should be ensuring that these agencies are funded well in advance of the coming crisis; and that the resources provided are additional, not merely diverted from other objectives.

International Finance Institutions will also need to tackle vulnerability within the macroeconomic context—the tools may differ depending on credit-worthiness, but countries are likely to have new import-financing needs; and fiscal pressures from the expansion of social safety nets.

Food supply disruption will become more likely with climate change, and this is another moment to consider the need to re-focus agricultural subsidies. Most of these subsidies are poorly focussed and a major waste of taxpayer money. They are also huge: EU agricultural subsidies in 2021 of EUR 168.5 billion (USD 185bn) exceeded the entirety of global aid in that year (USD 161.2bn). Farmers will be major beneficiaries of higher prices while reduced subsidies will barely affect output levels, and would be much better-spent on those struggling with food costs, or increasing climate resilience.

Policymakers should also tackle policies that undermine food security. For example, despite some reforms in the 2018 US farm bill, the US still insists in providing its food aid with US produce, but also that half should be delivered in US vessels (adding almost 50 percent to the cost of shipping). Reform could save over $300m per year, and tens of thousands of childrens’ lives. With grain prices and shipping costs at all-time highs there is no case for these policies adding to food costs and shipping congestion.

Food prices are already high, and tens of millions will fall into extreme poverty and go hungry in the coming year. Policymakers need to expect further disruptions but still avoid hasty export restrictions that exacerbate shortages and instead take the opportunity to undertake reforms in agriculture policy that will help farmers and markets respond.

Even with open markets, high prices are inevitable, and many vulnerable countries will need new resources to tackle the humanitarian needs.

With all eyes on the conflict, policymakers at the G20 and beyond must be alive to the wider consequences, and act accordingly.

We’re grateful for suggestions from Mark Lowcock. Any views and errors are those of the authors. A background note with further explanation of the approach used to calculate the number of people who might be pushed into extreme poverty was added on 6 April 2022.