Should Countries Be More Like Shopping Malls? A Proposal for Service Guarantees for Africa | Center for Global Development | Ideas to Action Skip to main content

Should Countries Be More Like Shopping Malls? A Proposal for Service Guarantees for Africa

Should countries be more like shopping malls and compete for investors on the global capital market?

Policy paper: Should Countries Be More Like Shopping Malls? A Proposal for Service Performance Guarantees for Africa

Shopping malls have strong incentives to price services efficiently and to deliver them as promised. Failure to provide services such as security, cleanliness, and snow removal from the parking lot can give tenants a valid reason to terminate their leases. Poor service delivery is therefore costly for a mall operator once tenants vacate and the mall’s reputation is damaged, it is difficult to get the new anchor tenants that will attract others. As vacancy increases, insurance premiums go up and the risk of damage from vandalism or disrepair increases.

The same is true of countries experiencing investor flight. In our new paper, we use the shopping mall model to propose the idea of Service Performance Guarantees (SPGs). SPGs provide the opportunity for firms to purchase insurance against a wide range of risks and thereby strengthen the accountability of both governments and development partners by triggering highly visible payouts when service-delivery standards fall short of those specified in the guarantee.

SPGs would be especially useful in Africa. Many African countries are trying to improve their business climates, and some are starting from a very low base (figure 1). Business climate indicators, such as the World Bank’s Doing Business database, have diagnosed these problems for years. Our research has estimated the high costs of unpredictable power outages as well as levels of indirect costs that reduce the profitability of firms that may otherwise be quite competitive at the factory-floor level.  Some African countries have made progress toward improving the business climate but are yet to see higher levels of private investment. 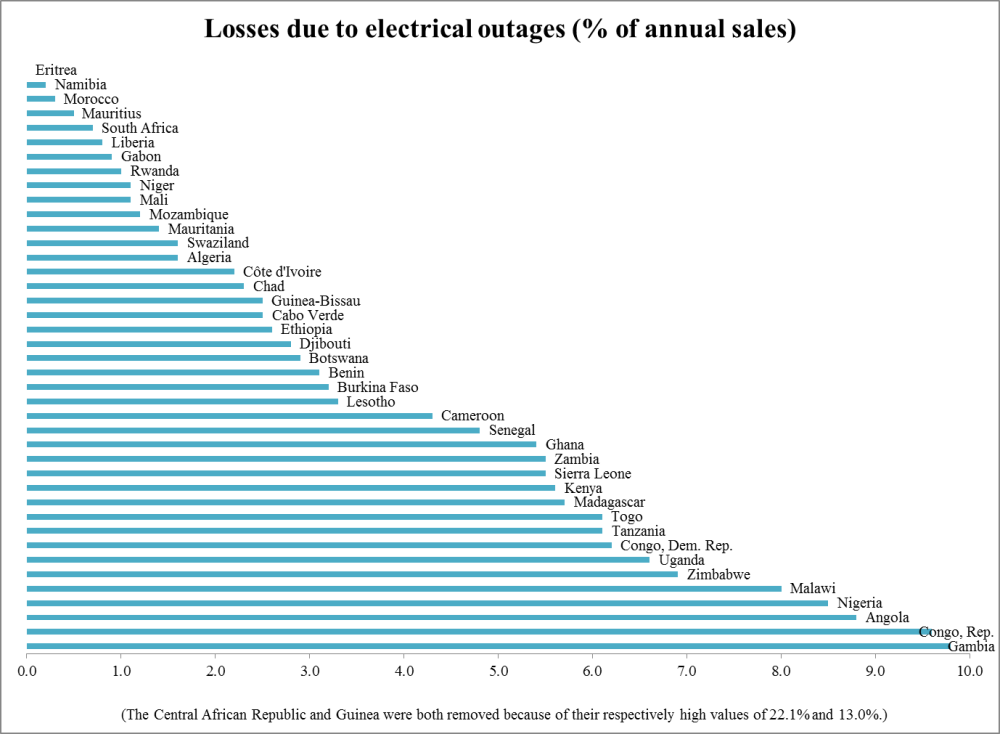 How Would SPGs Work?

Foreign or domestic firms investing in the country or in a special economic zone would be offered the opportunity by the relevant government authority to purchase a contract guaranteeing the delivery of specified services up to a minimum standard and for a prescribed period, possibly around 10 years.  These might include, for example, the quality and reliability of power supply, the time needed for customs clearance at ports or airports, the time for port turn-around, and the speed of processing and approvals of duty drawbacks as well as a range of other services and permits.   The guarantees would be contractual legal agreements between the service provider and the firm.  Contracts would be standardized rather than customized, except for the largest anchor firms (to extend the mall analogy).

SPGs would be covered by a “domestic reserve” funded from paid-in premiums and backed up by a further guarantee issued by an agency like MIGA or by USAID’s Development Credit Authority, which already has the authority to issue guarantees to domestic and foreign investors.  IDA or another donor could issue a backup guarantee.  These guarantees, together comprising the SPG mechanism, would be components of loans provided to the country to create or rehabilitate infrastructure or to help streamline business processes.  An “external reserve” would be set aside out of the loan amounts to cover the back-up guarantee.

Calls on performance contracts that exceeded the domestic reserve of the fund would trigger calls on the external reserve and a payment from the development agency to the firms via the SPG. At the end of the prescribed period, any unused balances in the domestic and external reserve funds would revert to the country as a bonus for providing good services. Countries that have made improvements in their business climate but are yet to attract investors may be good candidates for SPGs.  Special Economic Zones or Export Processing Zones, which typically offer a package of services to investors, might also be good candidates for a pilot.

Of course one also needs to consider the difficulties and risks.  The first risk is that of overcomplexity.  SPGs will work only if the performance contracts are reasonably simple and easy to monitor in a transparent manner.

The second risk is of severe losses due to inadequate implementation of reforms or overoptimistic projections of service standards. SPGs issued by governments with clearly inadequate capacity — such as those of fragile and conflict-affected states — will not be credible.  In addition, the operator of an economic zone cannot be expected to guarantee the performance of a provider, such as a power company, that is not within the operator’s range of influence, if not control.  In such cases, it would be necessary to either severely constrain the scope of guarantees or find an alternative arrangement to ensure joint responsibility for service delivery.

Third is a serious set of risks related to exposure, which could exceed resources unless contracts are limited and the service standards are realistic, taking into account the project’s expected improvements and any additional incentives provided by the SPG.  Provisions to cover situations beyond the control of any service provider, such as conflict or severe natural disasters, will be necessary.

The fourth risk is that demand won’t be high enough. Would the payments offered by SPGs attract enough firms to sign up even if they cannot cover business losses due to poor service?  The response will of course reflect the attractiveness of the conditions, but even if the response is small, some of the purposes of the SPG will be served.

Only Part of the Solution

On their own, SPGs are not a panacea.  They cannot substitute for the large investments in power, transport, or other infrastructure that may be needed to make service standards sufficiently developed to be included in an SPG.  They also cannot substitute for large political risk guarantees that may be useful to attract investors into such projects.  But with an estimated 122 million new entrants into the African labor market in the next decade, governments, donors and other actors must be open to new ideas.  In relevant settings, SPGs may increase government accountability towards investors, and in so doing, increase the amount of investment and jobs in sub-Saharan Africa and other developing regions.