We Analyzed 57 Legal Migration Pathways. Here’s What We Found | Center for Global Development | Ideas to Action Skip to main content

We Analyzed 57 Legal Migration Pathways. Here’s What We Found 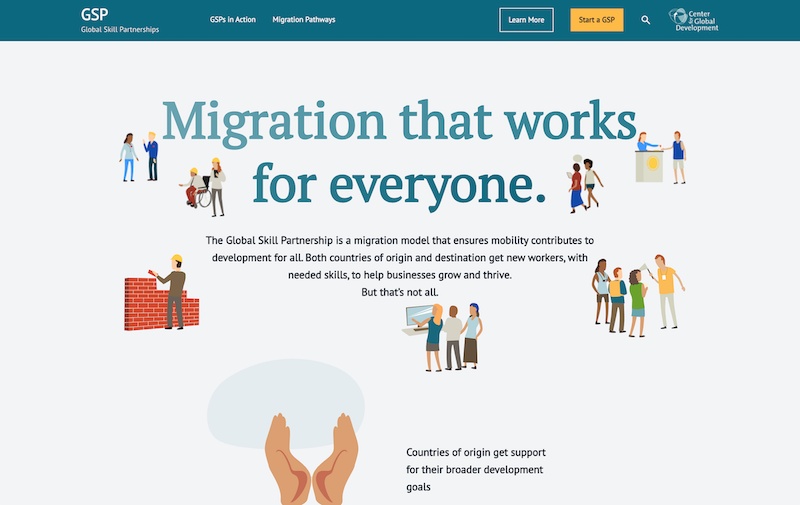 Many high-income countries are seeking to increase labor migration from low- and middle-income countries in a bid to overcome the impacts of their increasingly aging populations and worker shortages. We are launching a new database exploring 57 of these legal migration pathways.

We created the database to find out what worked, what didn’t, who benefitted, and how such pathways can be improved. To enable lesson sharing, the pathways are able to be sorted by country, sector, and skill level. Each pathway includes a summary, checked by experts, containing information as to why the pathway was started, how it operates/operated, and what impact it has had.

We define “legal pathways” as migration pathways between at least one country of migrant origin and one country of migrant destination. We have only included pathways that are (1) moving people for work purposes from lower to higher income countries; (2) are skill- and/or sector-targeted; and (3) have an important government component in the design of the program and/or its implementation. The pathways can be temporary or permanent, current or completed.

Our database includes 57 legal migration pathways that fit the definition listed above. In this blog, we explore seven key findings that emerge from this data, including which countries are leading the way (and which are missing out), which sectors and skill levels receive the most investment, and why the majority of pathways are bigger in scale than the prevailing narrative would have you believe.

The pathways are inherently difficult to compare; many have multiple countries of origin, countries of destination, skill types, and skill levels. As a result, a small caveat to the analysis below is that many of the graphs presented do not show numbers that add up to 57. The underlying data is available in the database or by contacting us.

1. Among countries of destination, Germany is leading the way

We restricted our database to those legal migration pathways moving people to high- and upper middle-income countries. Europe contains the majority of these countries of destination, with Germany coming out on top. They have 16 current or completed pathways, with Canada and then Australia following. This is unsurprising, given their documented labor shortages and aging populations, requiring the implementation of bilateral labor agreements (BLAs) and other forms of legal pathways.

Germany should be commended for their willingness to experiment with different forms of managed labor migration, particularly those in the health care space such as “Triple Win.” Other countries that are attempting to attract talent, such as the United States, New Zealand, and Japan should take note. However, this finding merely reflects the number of pathways, and not their size, something that will be explored below.

Figure 1. Germany is leading the way as a country of destination for legal migration 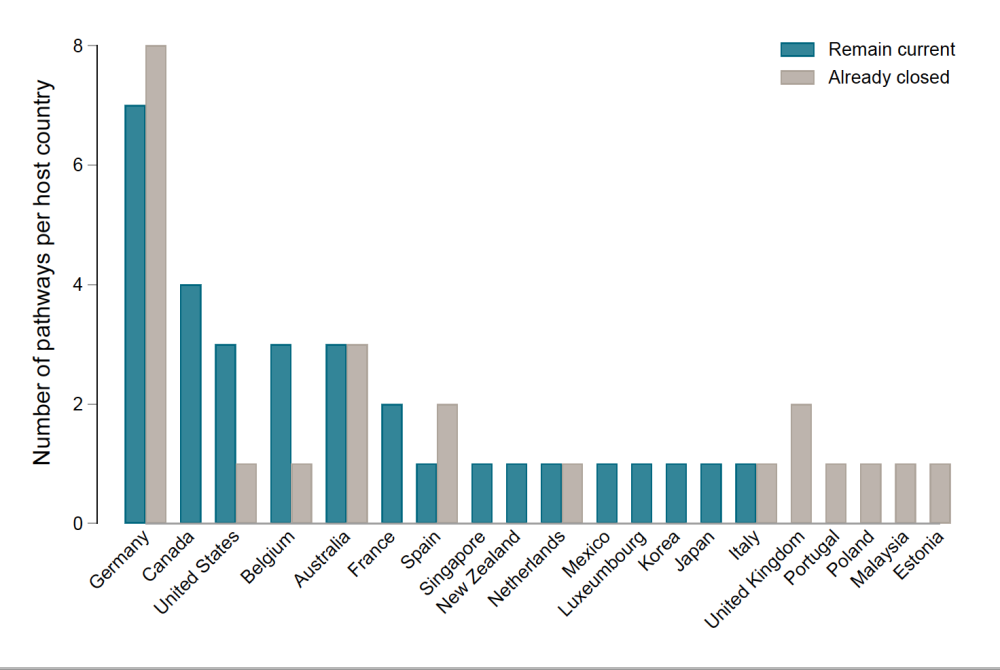 2. Among countries of origin, sub-Saharan Africa is missing out

The majority of the countries of origin benefiting from expanded legal migration pathways are based in North Africa or Asia. As the below graph shows, Morocco and Tunisia lead the way, with China and the Philippines close behind. Conspicuously absent though is sub-Saharan Africa. Despite the overtures of the European Union towards building more mutually beneficial labor migration partnerships with the region, there are only four such pathways in our database: two with Nigeria, one with Senegal, and one with South Africa.

Many countries participating in these legal migration pathways see migration as an investment with high returns, particularly if they are able to increase the number and skill level of those moving. It is to everyone’s interest that such movement happens in a safe, regular, and orderly fashion. In a bid to ensure that sub-Saharan African countries also benefit, efforts like the Joint Programme on Labour Migration Governance for Development and Integration in Africa are attempting to increase the migration management capacity of government and private sector actors (among other things).

Figure 2. North Africa is leading the way as a region of origin for legal migration 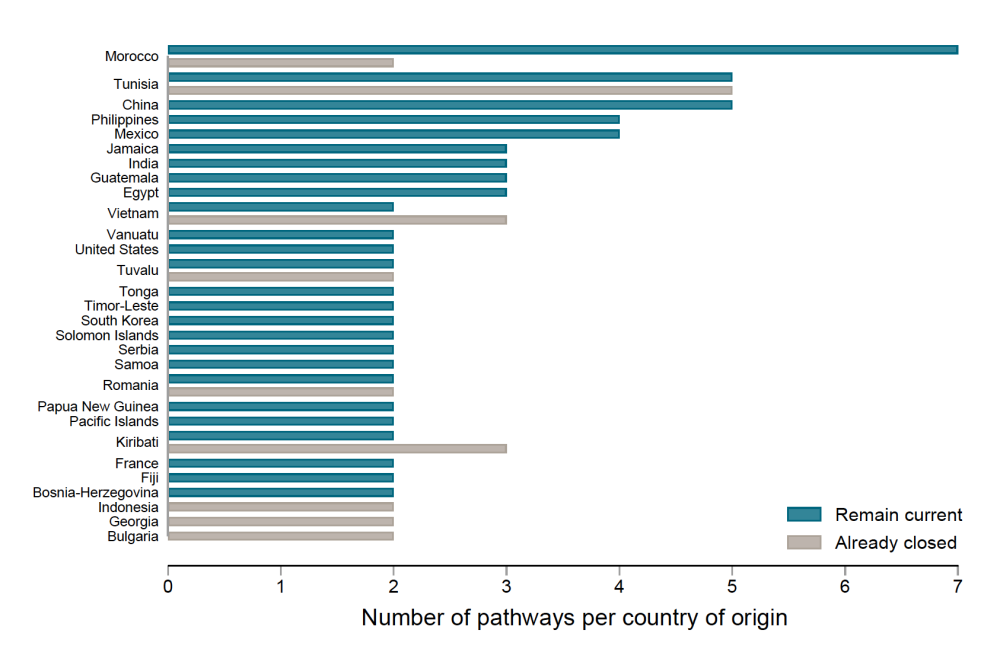 Note: Only those with more than one pathway have been included in the graphic

3. There are more “low”-skill pathways, but they don’t dominate

When deciding who is targeted through these legal migration pathways, many high-income countries use a simple dichotomy based on educational attainment: “high” and “low” skilled. There is no general definition of what a “high” and “low” skilled worker is, or even which sectors they can be ascribed to. Hence the below analysis crudely ascribed certain skill levels to certain professions (e.g. nursing = “mid”-skilled).

We acknowledge that the method of ascribing skills in this way is both outdated and unhelpful, but it does provide a useful data point to see whether certain types of pathways are dominating. As the below graph shows, while the majority of pathways are “low”-skilled, the rest are fairly balanced in terms of the types of workers they attempt to attract. 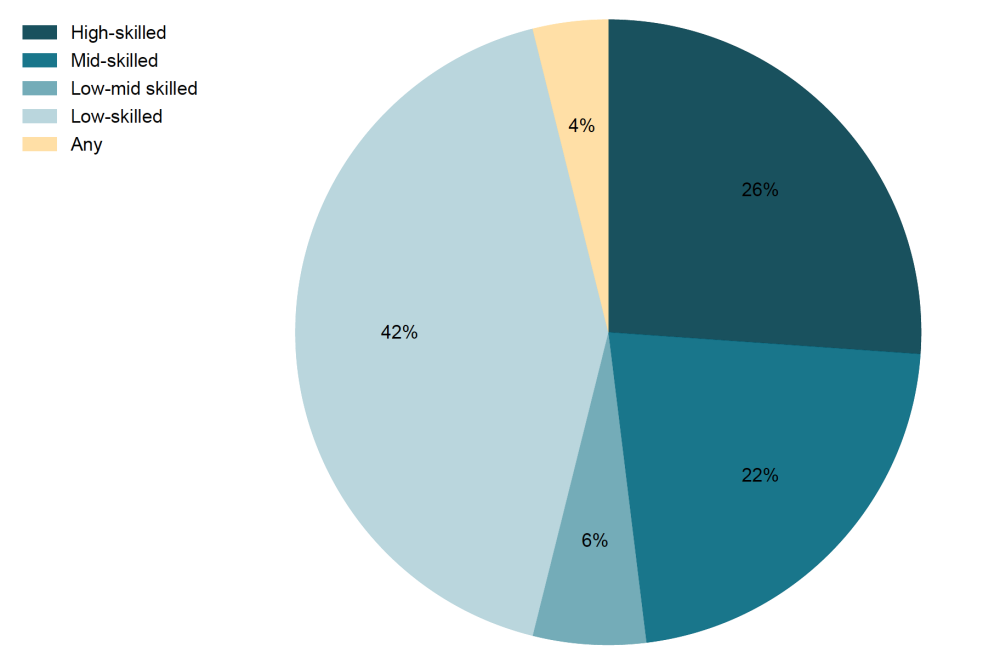 4. The length of the pathway varies by skill level

As was highlighted in a recent paper by Labor Mobility Partnerships (LaMP), “while mobility channels for high-skilled workers tend to provide permanent pathways to the receiving countries, channels for low-skilled migrants are usually temporary and very restrictive.” This certainly seems to be borne out in our data. Those in “low”-skill sectors such as agriculture and construction are often limited to seasonal or temporary contracts, while those in “high”-skill sectors such as information and communications technology are often granted longer periods of stay, or even a pathway to citizenship.

Interestingly, this finding appears to hold regardless of the skill needs within the country of destination. Many roles within “low”-skill sectors, even some non-seasonal agricultural work, are suffering from permanent labor shortages. Yet it appears that some countries of destination are developing and implementing temporary schemes within these sectors, regardless of the needs of their employers.

Figure 4. “High”-skill sectors tend to have access to longer-term pathways 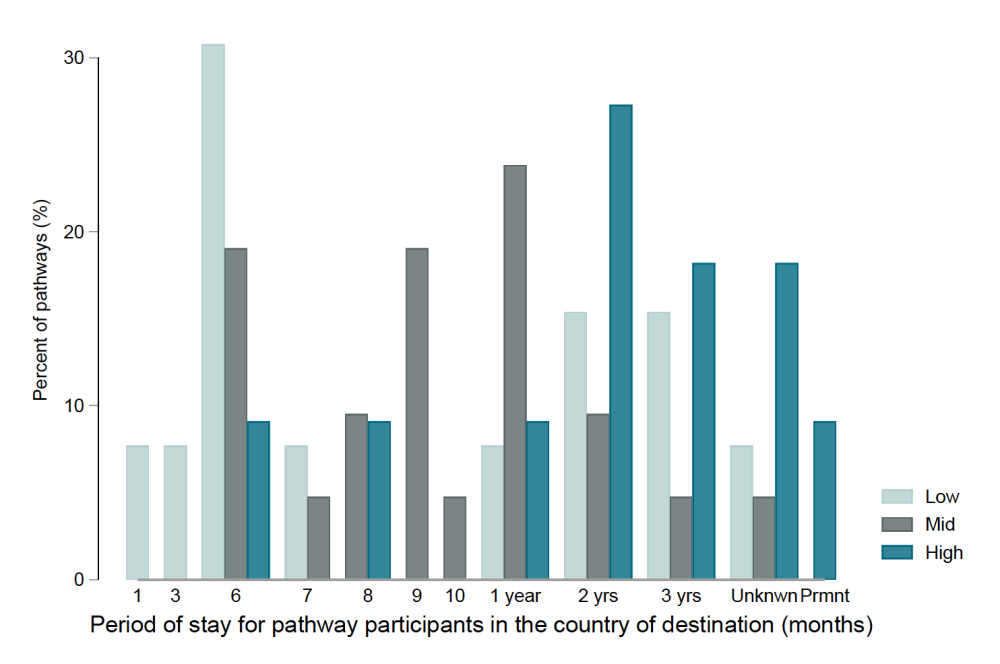 All 57 of the legal pathways in our database fall within five sectors: agriculture, horticulture, and food processing; engineering, construction, and manufacturing; health care (including nursing and aged-care nursing); information and communications technology; and tourism and hospitality. As previously mentioned, our sample is by no means exhaustive. Yet it provides a glimpse into what sectors countries of destination see as requiring facilitated migration.

The graph below shows the number of pathways included in our database that fall within the five sectors. Those that facilitate “low”-skill migration within the agriculture and construction fields dominate, with health care close behind. Interestingly, the COVID-19 pandemic has provided what has been termed a “global scramble for health workers” as many countries of destination have sought to invest in expanding legal migration pathways in this space. Hence we would expect this number to increase in coming years.

Figure 5. The majority of the legal pathways in our database were in the agriculture sector 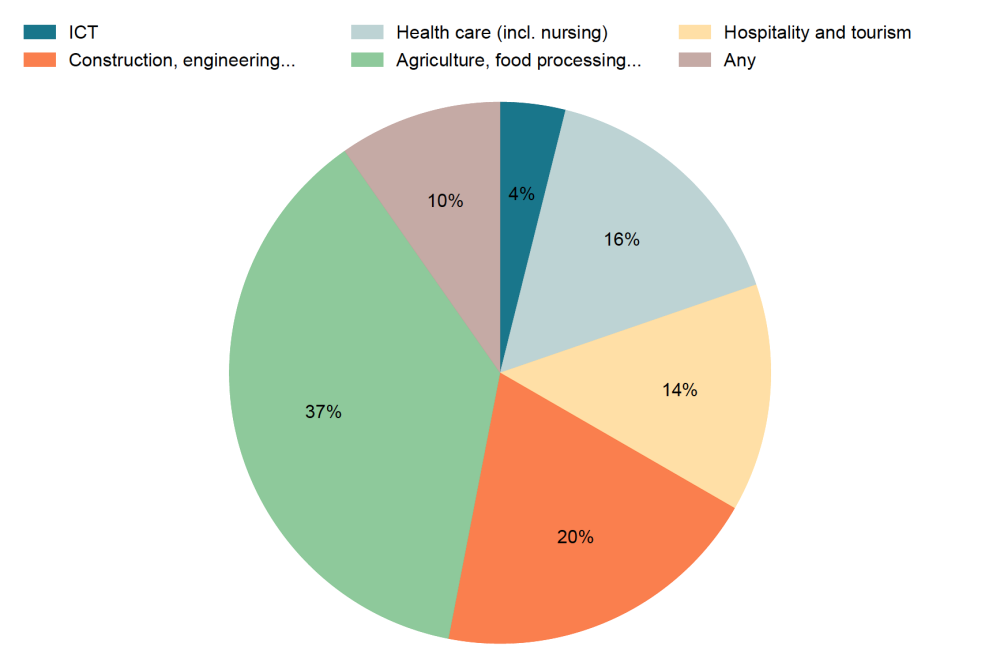 6. Most pathways are large, bringing in more than 1,000 workers

A criticism frequently levied at those implementing legal migration pathways is scale, or a perceived lack thereof. Many are unable to transition from the pilot stage into fully-fledged migration partnerships, a transition that will be essential if they are to meet policy goals such as reducing irregular migration and filling widespread labor shortages. In a bid to understand whether this was true across the board, we ascertained the number of participants (either per year, or in total) for each of the pathways, and classified them: <100 (small); 100-1,000 (medium); or >1,000 (large).

We found that only 18 percent of the pathways were classified as small, or bringing in under 100 participants. In fact, the median number of people participating in a lawful pathway was 3,000. This shows that the majority of pathways have managed to scale to numbers which go some way to meeting the policy goals above. Much could be learned from these efforts, particularly in terms of sustainable financing structures, that could be applied to the smaller pilot projects.

Figure 6. Contrary to debate, only 18 percent of our pathways are classified as “small” 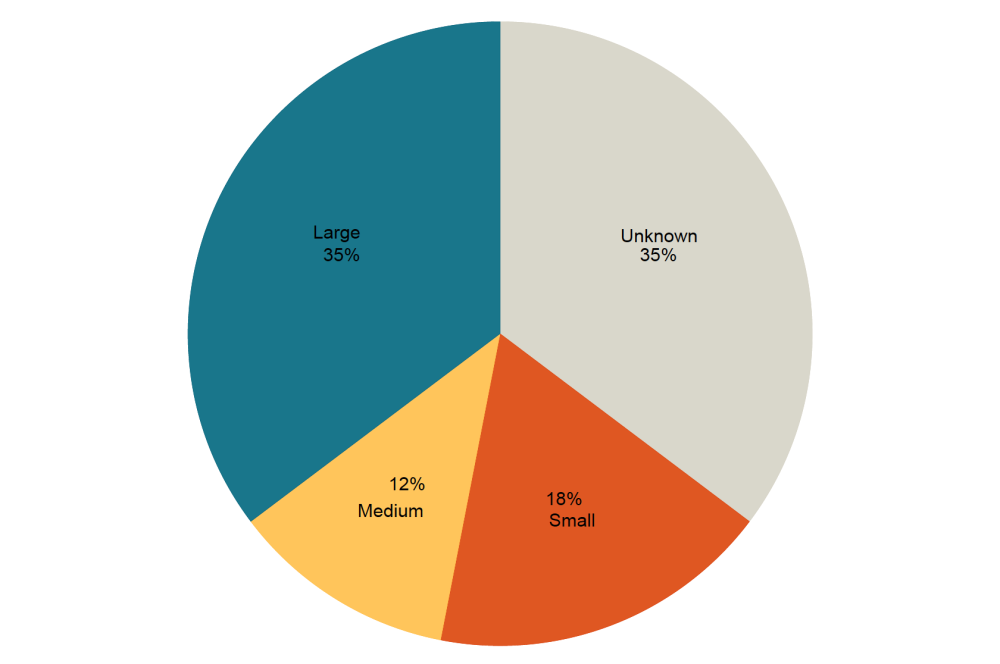 7. Most pathways are still running strong

In our database, we were able to capture the start and end years (if applicable) for all of our 57 legal migration pathways. The analysis of this data tells an interesting story of how political interest in this topic has played out over recent decades. While there has been an increase in interest in legal migration pathways in the last few years, many of the pathways in our database were implemented long before this proliferation, and there has been no noticeable uptick.

As can be seen in the graph below, of those pathways that were time-limited, the majority were implemented for only a few years. Some of these pathways were pilots that then went on to become longer-running pathways. Others were designed as longer-term projects, with some running for more than 23 years. What is fascinating is the number of ongoing legal migration pathways—12, or 23.5 percent. It will be fascinating to watch the lessons that are coming out of these projects, and we hope they will inform many more projects to come.

Figure 7. 23.5 percent of the legal migration pathways in our database are ongoing 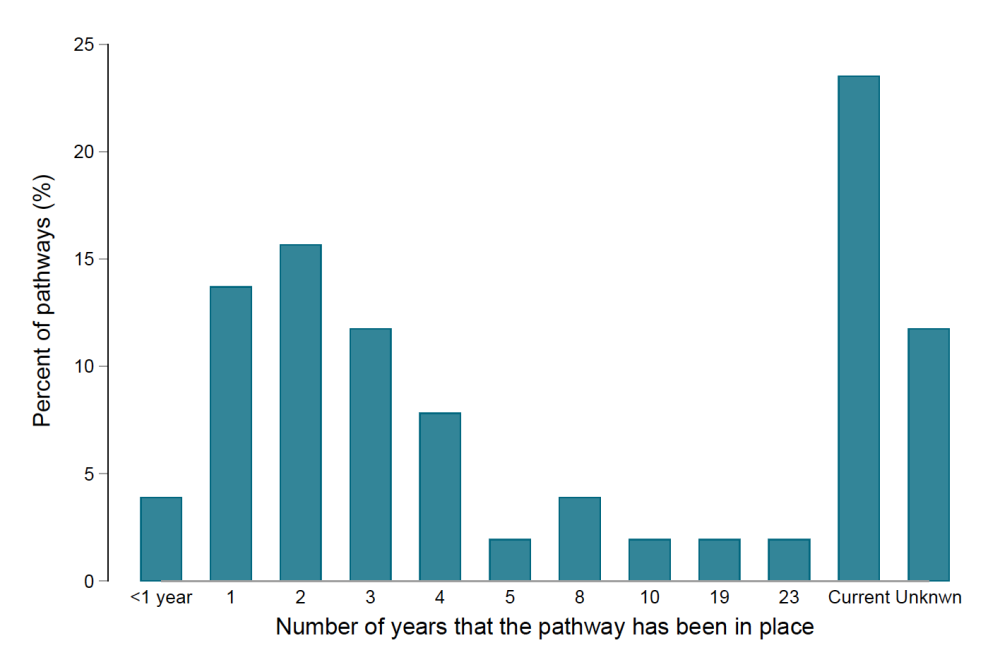 Innovation can feel like a lonely space. Many policymakers within high-income host countries find it difficult to know who else is working within the various different sectors and/or regions they are interested in, and what lessons have already been learned. We have been heartened by this analysis, showing the vast amounts of innovation (including pilots of our Global Skill Partnership model) taking place around the world. Hopefully we can learn from these experiences and scale such pathways to meet the coming need.

The authors would like to acknowledge the generous support of Zuzana Cepla (LaMP), Adam Chilton (University of Chicago), Kimberly Geronimo (LaMP), Ian Kysel (Cornell Law School), Rebekah Smith (LaMP), Diana Stefanescu (ICMPD), and all the policymakers and academics who generously gave their time to supplying us with, and checking, the data above.