Globally, 130 million girls are not in school, despite being of primary or secondary school age. To give you a sense of scale, 130 million is the entire population of Mexico or half the population of Indonesia. That’s a lot of girls! Among those who are in school, too few are learning. Yet we know that more and better education for girls can translate into more job opportunities, better health, fewer adolescent marriages, fewer teen pregnancies, and a host of benefits that extend into the next generation.

So what’s the best way to help girls to stay in school and to make sure they get the most out of it? A number of previous efforts to answer that question have searched for evidence on programs that seek to keep girls in school and to help them learn. Reviews search for studies that have terms like “girls” and “education” in their titles and bring together the most promising evidence from among that literature. Seems sensible, right?

But consider an alternative: What if the programs that help the girls the most are not the programs that target girls? Imagine two hypothetical programs. One is targeted towards girls, and it finds a big impact on girls’ learning. It even finds some impacts for boys, although those are much smaller. The other program is a general intervention (in other words, it doesn’t target girls specifically). Let’s imagine that it finds even larger impacts on girls, and that those impacts are roughly the same as the impacts for boys. If the objective is to increase girls’ learning as much as possible, the general intervention is clearly the most effective. But whoever writes the evaluation of that general intervention will most likely not mention girls in the title, the abstract, or the introduction. They might not even show the learning results separately by gender, since they may not find the lack of a difference between boys and girls very interesting. 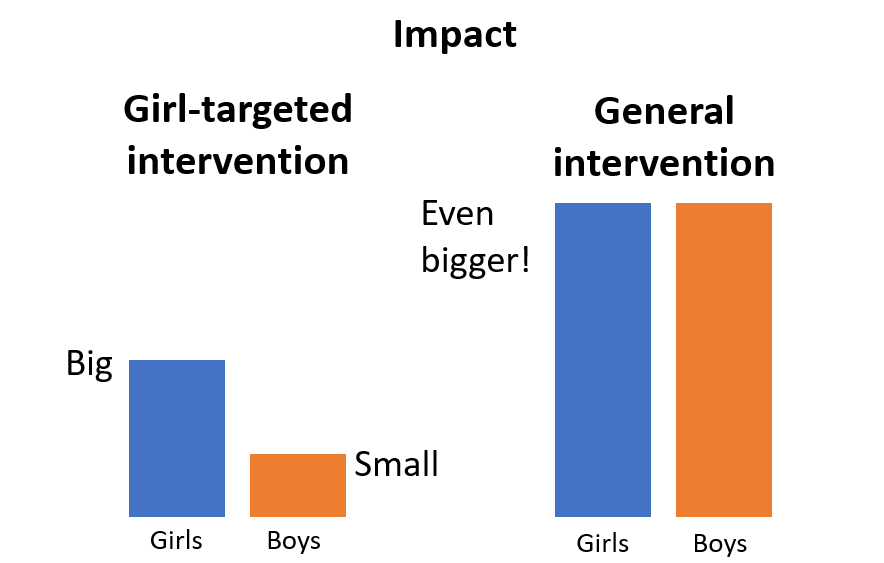 Strikingly, the example isn’t just hypothetical. A merit scholarship program targeted to girls in Kenya led to significant gains for girls (and even had some smaller benefits for boys), while a program that facilitated parent-teacher conferences in Bangladesh had comparable impacts for boys and for girls, with larger impacts for each than the scholarships in Kenya. 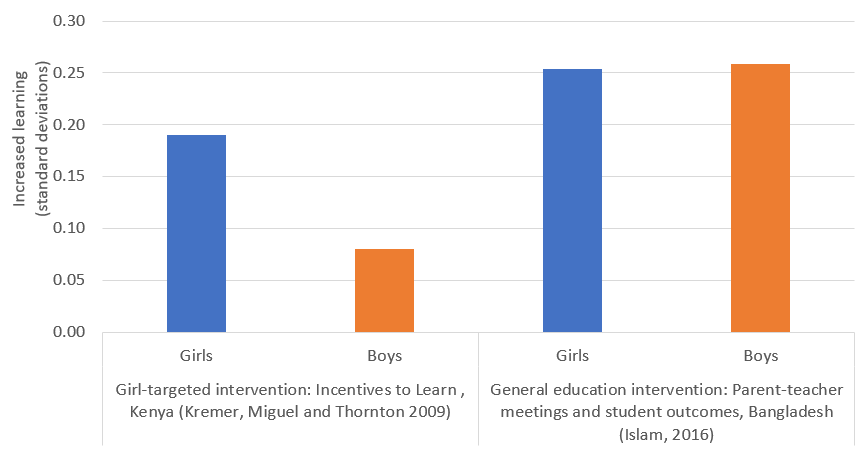 In our new working paper—“What We Learn about Girls’ Education from Interventions that Don’t Focus on Girls”—we try to figure this out. We examined more than 300 studies that measure the impact of different programs on children’s access to school or their learning in school in low- and middle-income countries. Twenty-three of those studies were specifically designed to improve schooling for girls, including cash transfers targeted to girls, providing sanitary products for girls at school, constructing schools with girl-friendly facilities, and others. But out of those 300+ studies, just one-third reported impacts for boys and girls separately.

Lesson One: We can’t learn how to improve girls’ education if we don’t report outcomes for girls

There are a variety of reasons that researchers may not report impacts for girls: Some interventions don’t have a clear reason for why we’d expect different outcomes for boys versus girls, so researchers don’t see it as important. Some researchers are wary of testing and reporting lots of differences across groups for fear of listing “false positives”—results where the statistics suggest a positive impact but are actually just a result of the researcher having tested so many hypotheses that one or two came out positive by chance. Still, reporting outcomes for key groups of interest (like girls) somewhere (even in an appendix) costs little, has the potential for real benefits, and should be a part of every study.

We reached out to the authors of the other two-thirds of papers and asked them to share their data or run the results separately for boys and girls for us. That added an additional 50 studies to our collection.

Because the gains are comparable and more general interventions have been evaluated, policymakers have a longer list of tested options to draw from among general interventions. Furthermore, scaling up programs that benefit boys as well as girls may be more politically palatable, even if the primary objective is to benefit girls.

When we rank the interventions in terms of their impact on girls’ access to school, seven of the ten most effective focus on reducing the cost of schooling, whether by paying cash transfers (in South Africa, Malawi, Nicaragua, Nepal, and Morocco) or by directly subsidizing school through scholarships (in Ghana) or subsidies to the schools (in Pakistan). Most of the effective interventions to improve access operate through the household. There are some cash transfers among the least effective programs as well, but they are fewer.

A few things we didn’t learn from this study

This study focuses on getting girls to school, keeping them there, and helping them learn. Most of these interventions focus on primary education, although a few look at secondary or pre-primary school. This is simply because more primary school programs have been evaluated; hopefully we’ll continue to learn more about secondary education. A growing set of interventions seek to help girls navigate adolescence and the transition to the labor market effectively, some with strong results (in Liberia and Uganda, for example). We don’t examine those here.

This study also does not suggest that we don’t need to worry about gender in education. For example, an intervention that effectively ensures that girls are safe in school addresses a human rights issue, and it may be a priority even if its primary result isn’t a large boost in access or learning. In addition, general interventions are likely to be more effective if they consider gender issues in their design, even if the interventions aren’t targeted to girls. Consider training teachers to interact with their students more effectively, including calling on girls as much as boys. Such a program wouldn’t be targeted to girls per se, but it might benefit girls. Few such interventions have been carefully evaluated as to their impacts on access and learning.

In this post, we’ve focused on boosting girls’ absolute levels of learning. But another outcome you might care about is inequality between boys and girls, in which case you might focus on interventions that benefit girls more than boys, even if the absolute gains are lower.

As we continue to learn more about how to help girls succeed in school, we need to evaluate innovative programs. But in the meantime, one of the best ways to help girls overcome the learning crisis may be to improve the quality of school for all children.

This research was supported by Echidna Giving and the Umbrella Facility for Gender Equality.