What Can We Learn from Sociology about Learning?

Below is my version of Lant Pritchett’s 4x4 accountability model for the description of education systems coherent for learning. 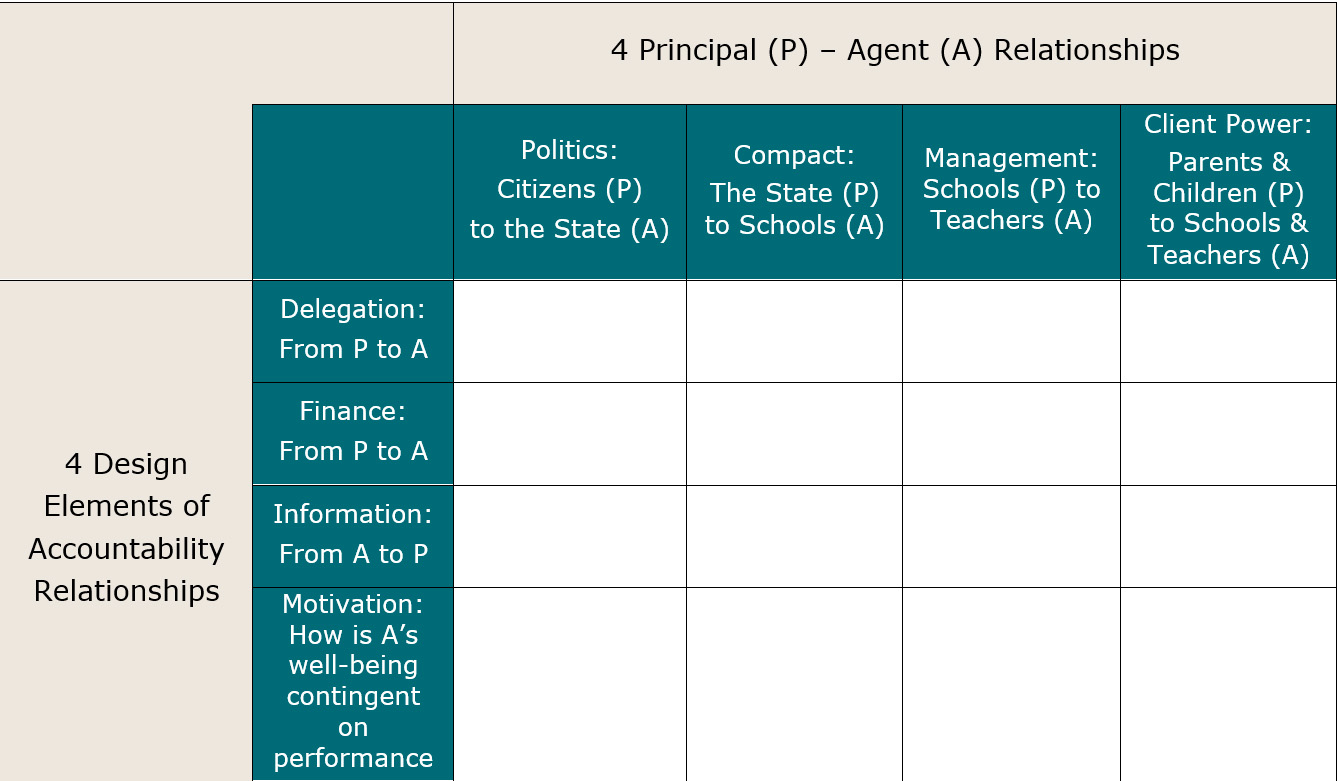 One of the key things that should strike you from this particular framework and this way of disaggregating the WDR04 accountability triangle, is that the Delegation aspect of accountability relationships in education systems is probably the least studied. The WDR04 has spawned a range of literature looking at the role of better information and better incentives for performance, and there has been plenty of research looking at financing and resourcing. But there’s next to nothing on delegation—what do parents and governments actually expect from schools? Much of the research on the economics of education looks at the effects of schooling on later outcomes, for example on earnings or health, but that is not the same question as what was initially intended.

This is where the RISE working paper by Susan Watkins and Amy Kaler comes in. Their paper focuses on the collective understandings of education by teachers, parents, and students.

"Currently, there is no reason that teachers, parents or students should care about the learning students do in the course of their schooling, except insofar as it enables them to pass tests and exams: what matters is the credential … A degree is a passport to a job, even when quality of education is spotty at best."

The insight, from fieldwork in Malawi, applies in a great number of other places. We are going around asking whether schools have the finance and incentive to ensure children learn skills, and whether parents receive sufficient feedback on their child’s learning, without bothering to think about whether parents ever actually asked anyone to teach their children skills. Bizarrely, it seems they often didn't.  Instead, parents asked for their children to be credentialed so that they could get a formal sector job, and to some extent also socialised.

"…where missionaries played a powerful role in constructing the institution of education as one in which schooling is perceived as a form of ascetic devotion: it is primarily a moral, rather than academic, endeavour."

If there was never any delegation of the learning of specific skills as a goal of education, either by parents directly or even really by the central government, then we shouldn't be surprised that little learning is actually delivered.

In a related point, Watkins and Kaler also focus on the importance of the political economy of policy and reform, noting that there is frequently a tension between international actors prioritising primary education, and domestic policymakers who prefer to prioritise tertiary education, both as a strategic national development strategy ("deep down some of us believe that no country has developed by investing heavily in primary”), and also for self-interested individual reasons as members of the elite whose children are likely to be eligible for any subsidy for tertiary education.

They end on an optimistic note:

Pivoting to learning should be even easier, and thus more rapid, than [successful changes in sexual behaviour in response to HIV]. There would still be a credential that demonstrated enlightenment, status and that was required for a job with a salary: only the requirements for the credential would change."

This is one of a series of blog posts from “RISE"–the large-scale education systems research programme supported by the UK’s Department for International Development (DFID) and Australia’s Department of Foreign Affairs and Trade (DFAT). Experts from the Center for Global Development lead RISE’s research team.

Blog Post
A “Rosetta Stone” for Comparing Test Scores Around the...
Dev Patel and Justin Sandefur

Blog Post
Everything You Ever Wanted to Know About Teacher Labor...
Lee Crawfurd

Blog Post
How Big Are the Impacts of International Education...
David Evans and Fei Yuan