What Should Think Tanks Do? Read This Book to Find Out

A prior version of this post appeared in the On Think Tanks blog. 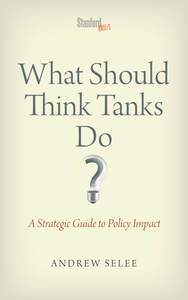 Andrew Selee, vice president for programs at the Wilson Center, a think tank in Washington DC, has written a slim volume that will be useful to anybody who is part of a think tank leadership team. The book, What Should Think Tanks Do? A Strategic Guide to Policy Impact, focuses on Washington tanks and will therefore be of particular interest to those of us inside the beltway. Nonetheless, the issues Andrew discusses will resonate with think tank leaders—and funders—everywhere.

I and a few others at the Center for Global Development were among the dozens of think tankers Andrew interviewed for the book, and he references my joint essay with Ruth Levine on CGD’s 12-step program for policy change. He is generous in his comments, not only about the CGD but about the half-dozen or so other think tanks he profiles. It’s a congenial approach makes the book a pleasure to read. I found myself eagerly highlighting ideas and lessons from other DC tanks that could improve how we do things here at CGD. I wish this book existed when I joined CGD back in 2004.

As his sub-title suggests, Andrew is a big believer in strategy, and he outlines a five-step process (Mission Review and Goal Setting; Program Planning; Audience Segmentation and Communication Strategy; Resource Development to Implement and Sustain the Plan; and, finally, Evaluation of Outputs and Outcomes). So it seems surprising that he includes CGD prominently among the examples to be emulated. We are emphatically not much for strategy, as Todd Moss and I explain in a forthcoming CGD essay on the 12 lessons we have gleaned from the Center’s first 12 years. Our Lesson Seven is “Don’t plan, experiment”:

“We are often asked for our  strategic plan and elicit quizzical looks when we say we don’t have one. In fact, we deliberately don’t “plan” upstream, beyond encouraging senior staff members to articulate their major areas of work and expected outputs so we can match them with funding. Using research to affect policy decisions and development outcomes is rarely linear, and opportunities for impact are almost always hard to predict. Our strategy, so to speak, is to be ready to react to the sudden appearance of a policy window by having a good stock of well-researched ideas and providing our fellows with space to respond.

How to make sense of this seeming contradiction? Part of the answer lies in terminology. Lesson Two in my joint essay with Todd is: “Articulate an inspiring mission and aim for results.”  We feel strongly that our mission—improving the policies of the rich and powerful that influence development outcomes and limit or enhance the opportunities of poor people in developing countries—has been an important ingredient in CGD’s success.  It’s the foundation for all we do, and it corresponds neatly to Andrew’s first step.

Another part of the answer concerns the difference between writing a coherent description of a process and how that process is actually lived and experienced. While we deny having a strategy, and our president, Nancy Birdsall is quoted to this effect in Andrew’s book, in practice we regularly attempt each of the actions described in Andrew’s five-part strategy. We just don’t do them in anything that would look like a sequence: all the steps are going on all the time.

And it turns out that’s been Andrew’s experience, too (p. 93, emphasis added):

Most of the time the five steps we have laid out in this book seem to happen simultaneously with limited sequencing or time to devote to each. Trust me, I understand. I started this book originally as a way to keep up with the strategic planning steps I had committed to with our board. I was really just trying to create order out of the chaos of my days… Perhaps the most important lesson from truly strategic institutions and programs is not that they do things in a neat, perfect order but rather than they have built feedback loops into their work that allow them to do the five steps of a strategic process on an ongoing basis with little extra effort.

To which I say, Amen. Except that there are some particularly chaotic days when the extra effort doesn’t seem so little.

In 2013, our CGD colleagues Julia Clark and David Roodman designed a low-cost quantitative approach to rank US and international development think tanks by the strength of their public profile. Think tanks trade in ideas and ideas need to be noticed to be adopted. Thus, think tanks’ ability to garner public attention is likely to be a good marker of their influence and potential for impact.

Blog Post
The Best Job in the World
Lawrence MacDonald

When my children were young we sometimes played a game at the Thanksgiving table: each diner wrote on a slip of paper something for which she or he was grateful, folded it and placed it in a basket. We then passed the basket and took turns picking one, reading it out loud and guessing who wrote it. I often wrote: "I am grateful to have meaningful work" and when it came time to explain I would say that I felt very lucky to work at CGD and to have what was for me the very best job in the world.