The World Bank Is Turning 70. Do We Still Need It? | Center for Global Development | Ideas to Action Skip to main content

The World Bank Is Turning 70. Do We Still Need It?

The World Bank opened in 1946 to finance a global economy just emerging from colonization and warfare and just embarking on the Cold War. Today the global development landscape is radically different, and capital circles the globe at volumes unthinkable back then. Why keep the World Bank now?

That’s the question asked in a forthcoming issue of the Journal of Economic Perspectives. One of the papers appearing there is by Martin Ravallion of Georgetown University; another is by me and Michael Kremer of Harvard. Ravallion and Kremer are also CGD fellows.

The papers have a common thrust, which I did not expect. (I didn’t read Ravallion’s until we had finished ours.) Ravallion spent 25 years as a research leader within the Bank, while Kremer and I are outsiders. That could lead us to very different conclusions.

But we agree solidly on the big things: Yes, the World Bank is still needed and has ample justification in economic theory. No, its principal role is no longer simply to loan money to countries “unable to otherwise obtain the loan,” though that outdated wording is still baked into the World Bank’s Articles of Agreement. Today, many of the Bank’s client-countries have other sources of capital.

The World Bank has evolved instead to fill a new role. And the three of us agree: that role is reducing global poverty. Ravallion writes,

Eliminating global poverty calls for a global institution — it is unlikely to happen if we rely solely on private investors, bilateral aid or non-governmental organizations. … Fulfilling that role calls for a more ambitious vision of the Bank’s role as a development knowledge leader. Its central focus should be on both the constraints on development at country level and the cross-country coordination needed for supplying key global public goods.

Kremer and I agree:

Modern analyses should proceed from the premise that the Bank’s central goal is and should be to reduce extreme poverty. We show that the vast majority of donor subsidies to the Bank go to its funding vehicles aimed at the poorest nations. We argue that the Bank’s principal impact arises through its influence on national policies, and that economic theory suggests such influence is often best exerted multilaterally. This view implies new ways to structure and evaluate the institution. 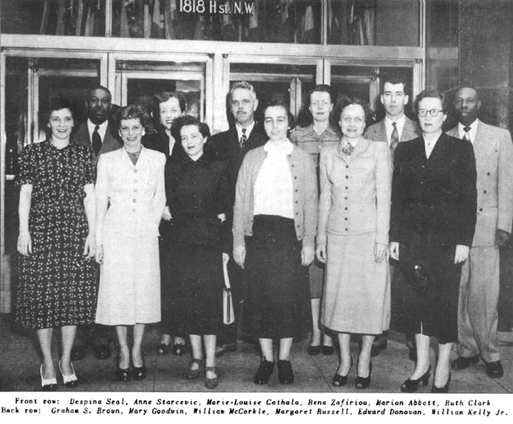 Some of the Bank’s first staffers, 1946 (IBRD Archive)

Why a focus on poverty for an entity whose Articles of Agreement don’t mention that word? One way to answer that is to trace what happens to the subsidy the World Bank gets from its shareholders. I don’t mean what the Bank spends its money on, which is financed in part by its own internal profits. I mean the ongoing economic cost that shareholders bear due to the existence of the Bank, including the opportunity cost of capital tied up in the Bank. The vast majority of that subsidy today goes to support activities in the poorest countries of the world — not in countries that have ample access to private capital. Kremer and I estimate that the Bank costs its shareholders around US$11–14 billion per year. This is an extraordinary bargain given what shareholders get from the Bank: We agree with Ravallion that an important part of what they get is global policy influence and knowledge for poverty reduction.

Some might see this focus on poverty as conflicting with the Bank’s role articulated by Nancy Birdsall here at CGD: “the provision of development-relevant global public goods.” We see little conflict. Birdsall does not mean all global public goods, which include everything from arctic biodiversity to asteroid-strike protection. Rather, she means global public goods that ultimately affect the poor, such as “supporting research in agriculture, health, and clean energy; and collecting and analyzing economic and social data.” Kremer and I agree with all of those in our paper, as Ravallion does in his. And Birdsall clarifies that her vision, “far from excluding the current goal of ending poverty … would embrace poverty reduction as an outcome of building stable, prosperous societies.”

Kremer and I do go somewhat further by not only considering certain public goods to have the ultimate effect of poverty reduction, but also considering poverty reduction itself to have characteristics of a public good. Thoughtful observers of the Bank caution against this interpretation because it seems to allow nearly any “social-sector” project to be labeled as providing a global public good or GPG. Devesh Kapur of the University of Pennsylvania and CGD has warned that,

in seeking to reinvent the Bank’s public image, its management and staff may tend to label all kinds of activities or “networks” as GPGs, meriting involvement on the basis of the moral claims that public goods invoke, and their ready slogan-appeal for Northern taxpayers. While many initiatives certainly do meet the criteria of public goods, the management also includes what one might call ‘”Potemkin GPGs.”

We take this pragmatic point. But we do not mean that any project with the word poverty in its title provides GPGs. We mean that activities that demonstrably reduce global poverty do provide a public good simply for that reason.

Leading economic theorists from Becker to Coate explicitly find that poverty alleviation itself is a public good, provided that altruistic preferences exist. This is because altruistic preferences give poverty reduction the two traits that define a public good: nonexcludability and nonrivalry. Respectively, these mean that no one can prevent you from being made happier because a person far away has left poverty, and your benefit doesn’t reduce anyone else’s benefit. (Tyler Cowen has a great refresher on this terminology.) And there is little doubt that altruistic preferences exist, given recent research like that by James Cox et al. and Stefano DellaVigna et al. This includes international altruism, shown among others by Clare Null. In other words, the Bank’s role of fighting global poverty instantiates its role of providing certain public goods.

The Bank has numerous shortcomings, and both papers are frank about those. Ravallion notes continuing skewed incentives for lending volume and laments that at the Bank “too much of what is labelled ‘knowledge’ is little more than sectoral lobbying.” Kremer and I are skeptical of some of the Bank’s policy influence. And we note the need to shore up the Bank’s political legitimacy — further adjusting its shareholding structure to reflect the 21st-century economy, as well as opening up the possibility for non-US citizens to hold its presidency.

The world still needs the World Bank, and these papers chart part of the course for this Bank to become the Bank the world needs.

Findings From a Survey of Development Leaders
Rachael Calleja
September 28, 2022