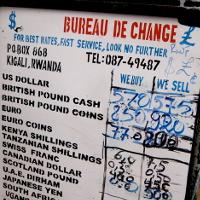 The Working Group on the Unintended Consequences of Anti–Money Laundering Policies examined how rich countries might rebalance their policies to continue to protect against money laundering and terrorism financing without hindering the ability of people from poor countries to conduct business and transfer money across borders. The working group's report provides policy recommendations for multilateral organisations and the US, UK, and Australian governments.

In 2014, migrants sent over $400 billion of remittances home through formal systems and at least an additional $130 billion through informal channels. In addition, businesses in poor countries engage in cross-border transactions to export goods and import key inputs. But banks in rich countries, under pressure from anti–money laundering and counterterrorism enforcement efforts, seem to be exiting entire sectors and regions in a process that has come to be known as "de-risking." A high-profile example of de-risking is the widespread denial of bank accounts to money transfer organisations. Following high-profile de-banking episodes in the UK, US and Australia, in some markets only the very largest players have had access to bank accounts, and many smaller players have been forced to close down or become agents of larger businesses.

What are some of the consequences of these actions? A reduction in competition within the money transfer sector could lead to higher remittance costs. Global remittances (the money migrants send home) are worth at least three times the total amount that is sent as aid to developing countries. Non-profit organisations also report damaging effects of de-risking on their ability to conduct humanitarian aid operations or recruit staff overseas.

Lower-profile but potentially even more significant is the drying up of correspondent banking services. Major banks across rich countries, including in the UK and the US, seem to be less and less willing to operate correspondent banking services for corresponding banks in developing countries. This reduces those banks’ access to the global financial system and damages important cross-border services such as trade financing. Recently, Bank of England governor Mark Carney referred to this worrying trend as "financial abandonment."

In addition to these cost concerns, de-risking may be undermining the effectiveness of the AML system by pushing transactions into less transparent channels. For example, some UK MTOs that were previously using bank transfers are now using bulk currency exchanges, rendering flows of money less transparent than before the de-banking. Similarly, the collapse of simple bilateral correspondent banking relations may mean more complicated routing for trade finance via less transparent jurisdictions like Dubai.

The working group is exploring the extent to which these concerns are legitimate, and determining the most appropriate policy response. The first working group meeting was on January 28 in London, with the second meeting in September in Washington. The final report will be available in November 2015.