After the Petro-dollars: Gulf Migration in a Climate Change Future | Center for Global Development | Ideas to Action Skip to main content

After the Petro-dollars: Gulf Migration in a Climate Change Future

The states that make up the Gulf Cooperation Council (GCC) host around 30 million migrants. These migrants form the backbone of the Gulf’s economies. According to estimates by the Gulf Labour Markets and Migration programme, dependence on migrants—especially in the private sector—is extremely high: in 2020, Qatar was estimated to rely on non-nationals for 95 percent of all employment; Kuwait for 85 percent; and Bahrain for 78 percent (the GCC average is 70.4 percent).

Migrants also contribute massively to their home economies: in 2020, migrant workers’ transfers home made the United Arab Emirates (UAE) and Saudi Arabia into the second- and third-highest sources of remittances globally, despite COVID-19 reducing the number of migrants. Concerns regarding abuses of migrants’ rights in GCC states are valid and important: however, the importance of migration to the Gulf for migrants themselves and for their communities must also be recognised.

As we move into a future (hopefully) dedicated to action on climate change, how will the global shift away from oil affect the Gulf’s economies, and the future of their migrant populations?

While detailed labour market data for the GCC is lacking, we know that most migrants come from India, Pakistan, and Egypt and tend to work in low-skilled, manual professions, particularly in construction. This in particular is a big industry: from January 2017 to February 2020, Gulf states allocated an estimated US$219.56 billion in construction contracts.

Construction projects often revolve around oil. Throughout 2018-2019, petrochemical projects accounted for nearly half of total construction contracts. For now, with oil prices recently over US$120 per barrel, the status quo suits the Gulf states well. Oil accounts for a large share of GDP: all GCC countries (except Bahrain, with 17 percent) gained at least 30 percent of GDP from extraction revenues in 2018 (Figure 1). Hydrocarbons dominate their exports (Figure 2). While these numbers fell during the COVID-19 pandemic, they have risen with the energy crisis sparked by Russia’s invasion of Ukraine. The IMF estimates that oil exporters in the Middle East and Central Asia have received a windfall of US$320 billion above pre-crisis estimates, equivalent to an additional 7 percent of the region’s GDP. 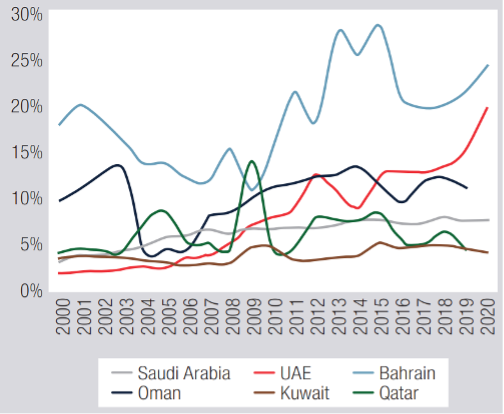 The need to diversify

In the longer term, this dependency on hydrocarbons poses risks. To combat climate change, dramatic change will be needed. If the Paris Agreement’s 1.5oC target is to be met, the richest countries must reduce their production of oil and gas by 74 percent by 2030, and investment into new production capacity must cease. Meeting global energy needs will therefore require a wide transition to renewable energy sources.

The implications of this for the Gulf states haven’t yet been widely accepted. For example, just last year Saudi Arabia’s Energy Minister vowed to extract “every last molecule” of hydrocarbons. The country’s COP pledges—including reaching net zero carbon emissions by 2060—were conditional on being able to continue selling oil.

If countries shift to renewable energy sources, the price of oil could fall; one estimate suggests that meeting the Paris Agreement targets could see oil fall to US$10 a barrel by 2050. The IMF estimates that if oil prices sank to just US$20 a barrel, Gulf states would reach “wealth exhaustion” (the point at which debt outweighs central bank reserves and sovereign wealth fund assets) within fifteen years.

While economically demanding in the short term, the GCC’s own members have reason to welcome a green shift. Without prompt mitigation, the Gulf faces declining water availability, increased high-heat days, humidity extremes, dust storms, and coastal flooding. This could have large social and economic ramifications. The Gulf’s large migrant worker population will be placed at even higher risk in greater heat; thousands already die every year due to heat at current levels.

This is where the thinking on migration and climate change needs to be joined up. A lot has been written about the effects of climate change on migration; a little is starting to be written about the possibilities of migration for climate mitigation; but not much has yet been written about the effects of mitigation on migration. With decreased oil revenues, will the Gulf keep funding the mega-projects—such as the dozens of stadia, or Saudi Arabia’s futuristic city, Neom—that provide migrants with jobs? While the GCC states’ sovereign wealth funds provide big buffers, it’s unlikely that their returns are anything like the GCC’s oil profits, plus governance problems and investment mishaps are recurring issues (Saudi Arabia’s Vision Fund has lost US$17 billion in the past three months).

What this will mean for future migration

Some diversification efforts are already being made. During 2018-2019, GCC investments in renewable energy increased markedly, to a total of US$7.3 billion (a figure still dwarfed by hydrocarbon-related investments). The UAE’s Energy Strategy 2050 seeks to double domestic clean energy consumption to 50 percent. Yet more is needed; Bahrain and Oman will run out of oil and gas in the next 25 years.

There is also an urgent need to create more resilient infrastructure. All GCC states are pursuing ambitious plans in the hydrogen economy and could become solar power exporters to the region and the European Union (EU). The UAE is increasingly investing in domestic food security, including through smart agriculture.

All of these efforts, however, require trained mid- or high-skilled workers. Drip-fed crops need technicians; solar farms need engineers; infrastructure upgrades need electricians, skilled construction workers, and hydrologists. None of the Gulf states have the workforce they need domestically; some form of immigration will be required.

For the states sending migrants to the Gulf, the continuation of migration flows will also be important. Seven countries, all Asian, have over a million migrants in the Gulf states. Annual remittances from the Gulf exceed US$108 billion, leading sending countries to seek to facilitate migration to the Gulf.

Forward thinking in the Gulf

In the future, the Gulf will face a more difficult competition for talent against both an ageing Global North and intra-regional Asian migration options. Gulf states will need to create new green path dependencies, which requires making themselves more attractive to in-demand green-skilled workers than other countries.

We offer two ways to do this. The first is to reform the Kafala system. The system ties migrants to employers, which greatly limits their rights and has come under scrutiny. Some slow reform is occurring, but it is limited so far and should be accelerated. This is necessary from a human rights perspective, but also for the economic durability of the GCC states’ labour supply.

The second is to link training and migration. For example, the Global Skill Partnership model offers a way forward: the Gulf could invest in training the workers they need for their new green industries in countries of origin and providing support for some of them to migrate to the Gulf.

Both of these reforms could ensure that migration to the Gulf continues even as oil revenues diminish. These new migrants, working in a Gulf that better protects their rights, would contribute to new green activities in their countries of destination and send remittances back home.

In an alternative future, the GCC states continue pumping oil at increasingly low prices after insufficient diversification. Only the most desperate migrants, spurred by growing hardships in their countries of origin, travel to a Gulf that is increasingly scorched and parched with few rights. One future is definitely preferable to the other. 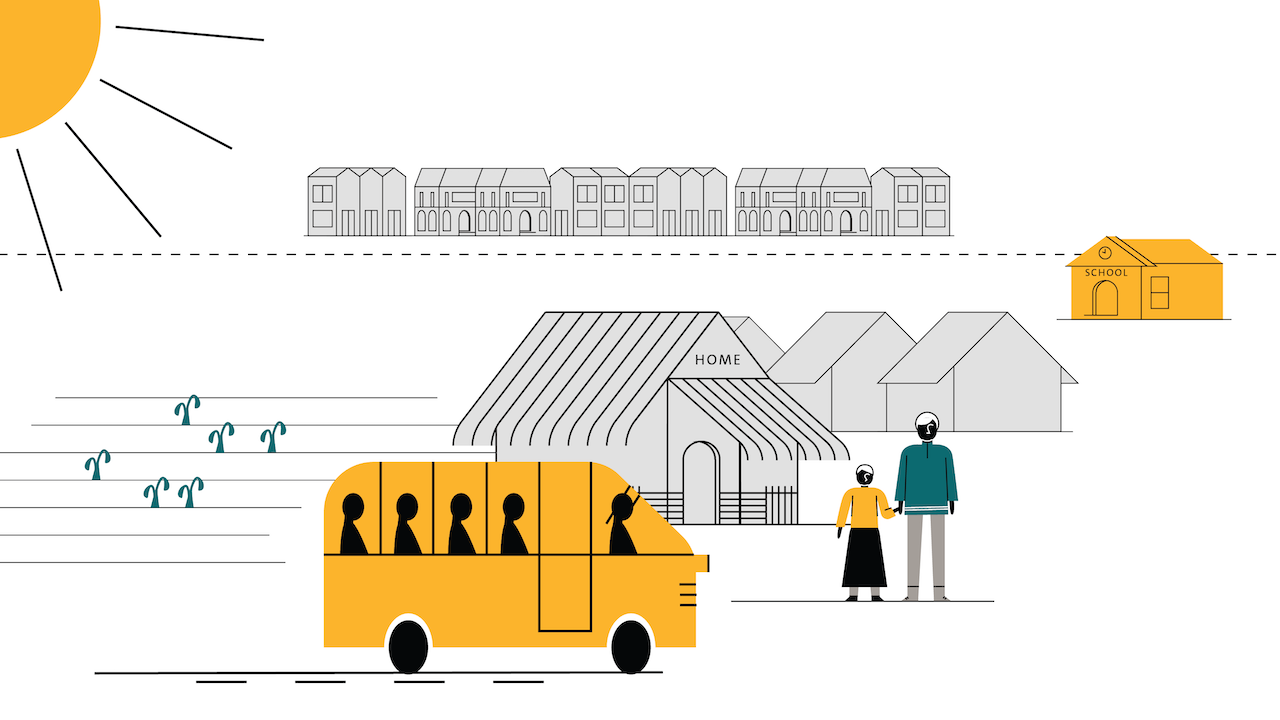