This is a joint post with Lucas Davis at the University of California, Berkeley. 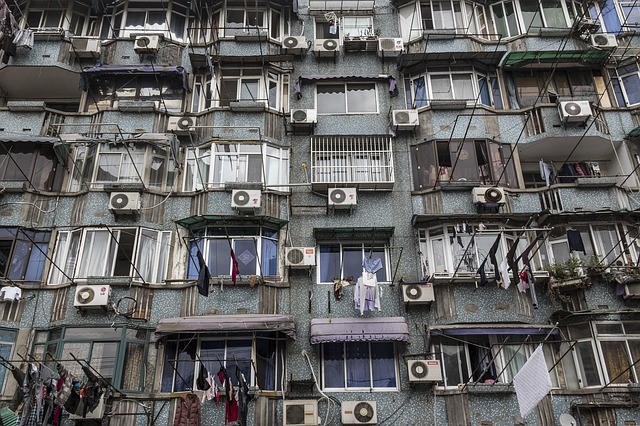 In a new paper published in PNAS, we examine the enormous global potential for air conditioning. Household incomes are rising around the world, and global temperatures are increasing. Both factors will drive increased adoption of air conditioners.

The good news is that air conditioning will bring relief to the more than three billion people who live in the tropics and subtropics. However, meeting the increased demand for electricity will also be an enormous challenge requiring trillions of dollars of infrastructure investments and potentially resulting in billions of tons of increased carbon dioxide emissions.

Our evidence comes from analyzing rich microdata from Mexico, a country with an unusually varied climate ranging from hot and humid tropics to arid deserts to high-altitude plateaus. As the figure below illustrates, we find little air conditioning in cool areas of the country, at all income levels. Even at high income levels saturation never exceeds 10 percent. In warm areas the pattern is very different. Saturation begins low but then increases steadily with income to near 80 percent. In gray is the distribution of annual household income. 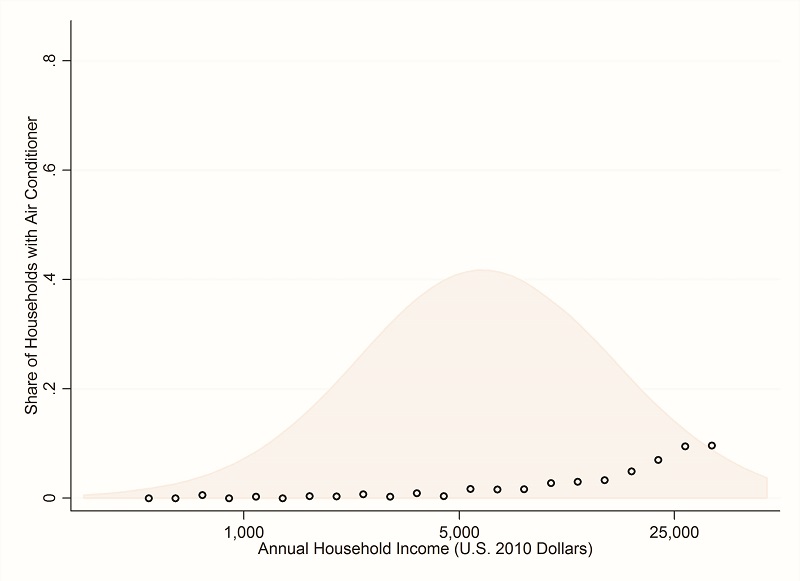 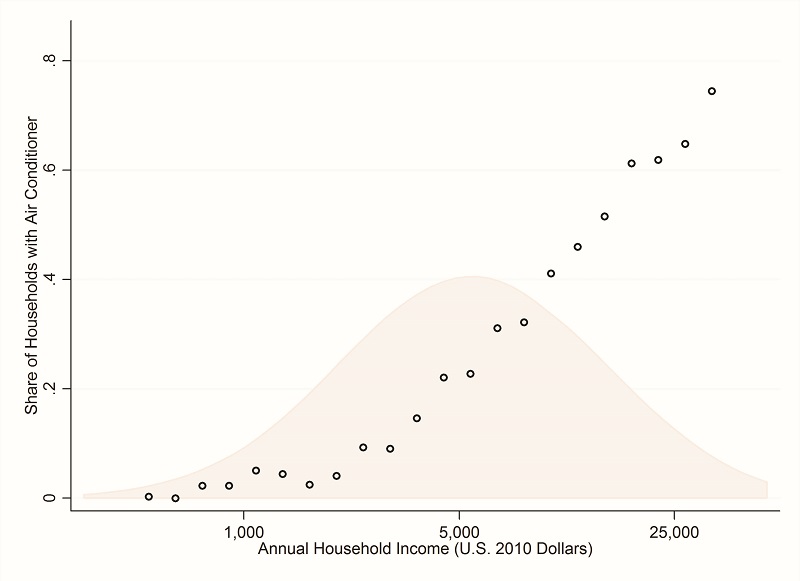 We combine our estimates with economic and temperature change forecasts to predict future air conditioning adoption in Mexico. Under conservative assumptions about income growth, our model predicts near universal saturation of air conditioning in all warm areas within just a few decades.  Temperature increases contribute to this surge in adoption, but income growth by itself explains most of the increase.

To get some sense of the global implications, the table below lists the top 12 countries in terms of air conditioning potential, defined as the product of population and cooling degree days[1] (CDDs). Excluding the United States, the list is dominated by middle- and low-income countries with warm climates. A total of almost 4 billion people live in these 11 countries, subject to an average of 2,700 annual CDDs. 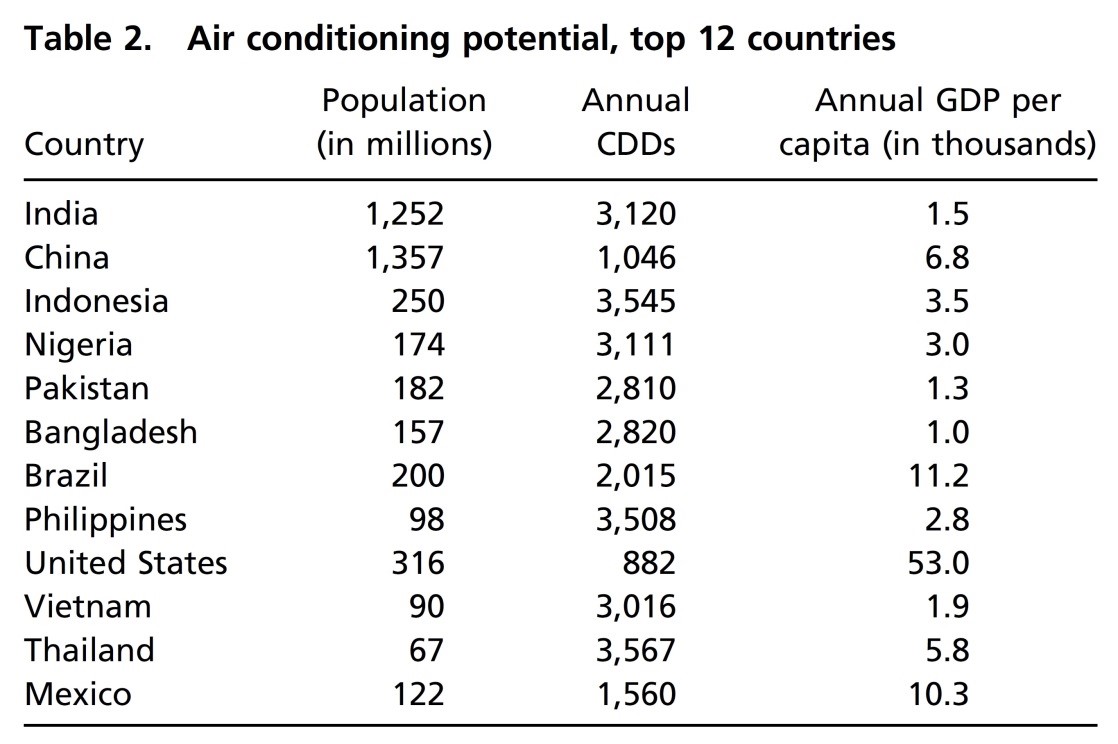 Take India, for example. Compared with the United States, India has four times the population but also more than three times as many CDDs per person. Thus, India’s total potential demand for cooling is 12+ times that of the United States. India already experiences frequent brownouts and blackouts, which would be exacerbated by increased air conditioning if infrastructure does not keep apace of demand.

Our estimates imply an 80 percent increase in residential electricity consumption in Mexico by end of century. Whether or not this prediction is realized depends on the pace of technological change. Continued advances in energy-efficiency or the development of new cooling technologies could reduce the energy consumption impacts substantially. Similarly, growth in low-carbon electricity generation could mitigate the increases in carbon dioxide emissions.

The future pattern of air conditioning adoption will also reflect what happens to prices. Equipment prices are likely to continue to decrease, which would further accelerate adoption. What will happen to electricity prices is less clear. A substantial increase in electricity prices, for example, resulting from carbon legislation, would slow both adoption and use.

Finally, there are broader adaptations that over a long time period could substantially reduce the need for air conditioning. Previous studies have found that people move away from regions affected by extreme temperature, so migration could mitigate the need for air conditioning. Demand for cooling also depends on how we build our homes and businesses, norms that can evolve over time in response to changes in climate as well as the availability and cost of cooling technologies.

The continual increase in global incomes means people are living more comfortably. This should be celebrated. But at the same time, it also means real challenges for the electricity infrastructure and global environment. We need an “all-hands-on-deck” approach including aggressive funding for innovation, efficient pricing of energy, and evidence-based environmental policies. We need efficient markets if we are going to stay cool without heating up the planet.

[1] The number of degrees that a day's average temperature is above 65 degrees Fahrenheit, and people start to use air conditioning to cool their buildings.

Blog Post
What Do We Know about the Cost-Effectiveness of Aid Spent...
Matt Juden and Ian Mitchell