As Antimicrobial Resistance Advances, We Need Action to Stop a Predictable Catastrophe | Center for Global Development | Ideas to Action Skip to main content

As Antimicrobial Resistance Advances, We Need Action to Stop a Predictable Catastrophe

Antibiotic resistance (AMR) is not a new problem. The policy and research communities have long been sounding the alarm about the coming threat; they’ve also identified high-level goals and potential policy solutions. However, the global community has been slow to implement these recommended policy measures and achieve systemic change. Like the climate crisis, AMR is a predictable catastrophe that will progressively advance without urgent leadership and global action.

As we fail to implement effective policy solutions, antibiotic resistance threatens to undermine modern medicine. Currently, at least 700,000 people die each year due to drug-resistant diseases, while estimates suggest that 10 million people could die each year by 2050 if AMR is not curbed—that's five times the recorded death toll in year one of the COVID-19 pandemic. As with the COVID-19 crisis, failure of antibiotics would lead to catastrophic economic and healthcare disruption, potentially costing the global economy trillions of dollars each year.

Figure 1. Deaths attributable to AMR every year by 2050 compared to other illnesses in 2014 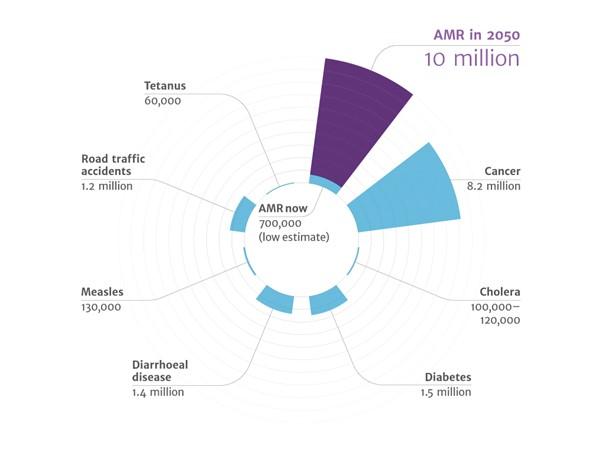 Antibiotics transformed modern medicine in the 1940s. People saw seemingly miraculous recoveries from previously fatal infections; likewise, long-term illnesses like tuberculosis and syphilis could now be treated. Antibiotics went on to serve as a foundation for much of modern medicine, enabling surgical intervention and immune-suppressing treatments like chemotherapy.

However, for almost as long as we’ve known about antibiotics, we’ve also understood the risk that they may lose their effectiveness. Four years after antibiotics were first used in humans, Sir Alexander Fleming sounded “one note of warning,” in his 1945 Nobel Prize speech when he talked of the danger of resistance: “It is not difficult to make microbes resistant to penicillin in the laboratory by exposing them to concentrations not sufficient to kill them, and the same thing has occasionally happened in the body".

High—and inappropriate—use of antibiotics has indeed eroded antibiotics’ effectiveness. During the first few decades of the antibiotic era, resistance was mostly kept in check by a steady supply of new drugs that replaced those lost to overuse. But the pipeline soon grinded to a halt, with the last novel class of antibiotics reaching the market in 1987.

Superbugs—those resistant to most of common antibiotics—are now frequently seen in hospitals throughout the world. In the U.S. alone, 2.8 million resistant infections spread every year, causing more than 35,000 deaths. In 2014, the World Health Organization published its first surveillance report on drug resistance, which documented the huge rise in drug resistant infections, particularly in hospital settings. This report found that in five of the WHO’s six regions, most hospital staphylococcus aureus infections were resistant to methicillin (MRSA for short), and levels of the even more dangerous vancomycin resistance were rising too. Equally worrying, some important back-up drugs, such as carbapenems, ware regularly failing. About 45 percent of bacterial deaths in Africa and South East Asia were caused by superbugs. Lots of other research has shown that resistance varies greatly by country, but is most prevalent in middle-income and less wealthy high-income countries (Figure 2).

Figure 2. Estimates of two main types of resistance by country.[i] 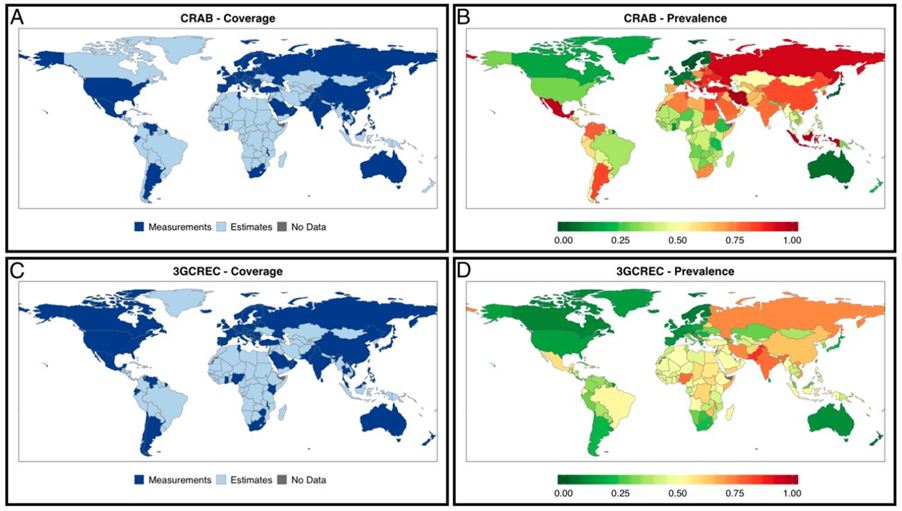 A huge volume of work has been conducted over the past decade to understand how to prevent this catastrophe. There has been impressive work from the EU, US, UK, and many other governments, philanthropic organizations like Wellcome, and think tanks such as Pew and CGD. There have been several high-level commitments to address AMR from the World Health Assembly, UN General Assembly (the 4th ever commitment on health), G20, and G7. All of these were aimed at reaching international agreement on a system that would fund antibiotic research and development (R&D), secure access, and reduce unnecessary use in innovative ways.

Despite this, and more than five years after the UN General Assembly commitment on AMR, there has yet to be fundamental change in the development and procurement of antibiotics. The international community has also failed to agree on a common or systematic approach to reduce unnecessary use.

Like many areas of government policy, AMR is an area where “prevention is better than cure”. Yet getting policymakers to spend now to avert future harm has proved challenging, even when the interventions are exceptionally good value for money with high return on investment.  And finding appropriate policy measures may be particularly difficult in low- and middle-income countries (LMICs) because most relevant economic and policy research on resistance has focused on high-income countries.

CGD will launch a working group on antimicrobial resistance—seeking to improve antibiotic access and R&D in low- and middle-income countries, and reduce unnecessary use

There are many important areas that are crucial to maintaining and improving the protection of antibiotics into the future, such as surveillance, infection control, and reducing consumption in agriculture. We at CGD seek to focus on policy in low-and middle-income countries and how to secure greater funding to improve research and development around antibiotics, ensure access to important antibiotics, and reduce unnecessary use. We are delighted to launch a new working group on this issue, supported by the Wellcome Trust, which will explore how to improve incentives for pharmaceutical companies to develop new antimicrobials and sell their products in LMICs, expanding access while simultaneously reducing unnecessary use.

Over the coming months we are going to conduct literature reviews and hold discussions with key stakeholders to sharpen our focus and approach by illuminating areas of progress; identifying promising strategies to improve access and reduce unnecessary use; and helping explain prior failures to execute needed reforms. Perspectives gathered from these discussions will inform the new CGD working group, to be launched in 2022, that will to identify politically palatable and high-impact recommendations in these areas.

To further inform this work, we will work with local researchers to conduct deep dives in three countries—India, Brazil and Nigeria—to identify measures that are appropriate and achievable in their economic, political, and health system contexts.

We expect the project to run until September 2023, when we will launch a final report to coincide with the seventh anniversary of the UN General Assembly’s commitment on AMR. Our aim will be to build as much consensus as possible among stakeholders and engage widely with both working group members, researchers, and policymakers.

If you have ideas about or questions about the project, please don’t hesitate to reach out to Anthony McDonnell. And for now, watch this space—we will host multiple events and publish a large amount of research and blogs on our thinking and progress over the next 21 months.