Are E-cigarettes a Threat or Boon to Public Health?

Recent reports of critical illnesses among people who have been vaping have intensified the debate over e-cigarettes and devices used to inhale nicotine. The outbreak of lung illness seems to justify those who have been worried over the safety of these devices. Yet arguments over the safety of e-cigarettes relative to smoking are not the only issue we should be worrying about. To address the public health effects of e-cigarettes, we need to look ahead at how this market will evolve. The major forces of change will not come from slow-moving and cumbersome regulations, they will come from agile profit-driven corporate behavior. And if e-cigarettes are going to have any positive effect on public health at all, the most critical measures may be legislative and regulatory actions to make sure that combustible tobacco producers have to compete with e-cigarette producers rather than own and use them to influence the market.

The harm reduction argument rests on some evidence and plausible inferences that e-cigarettes are less harmful than smoking combustible cigarettes and that they will help smokers quit. However, it isn't hard for a product to be safer than cigarettes, which eventually kill about half or as many as two-thirds of those who regularly smoke it. That's a risk of at least 500 premature deaths out of 1,000 smokers. If e-cigarettes were even half as risky as smoking and helped lots of smokers quit, they could literally save tens of millions of lives.

The harm reduction argument relies on the risks of inhaling chemicals into your lungs through vaping relative to smoking cigarettes. But that doesn't mean they are necessarily safe in absolute terms. For example, if regularly using e-cigarettes turned out to be a hundred times safer than smoking, it would still lead to 6 premature deaths out of every 1,000 users. At that rate, non-smokers who start to vape regularly would face a risk of premature death and disease equivalent to skydiving 1,000,000 times (0.006 deaths per 1,000 jumps in 2015). In other words, to be safer in absolute terms then skydiving, e-cigarettes will have to be more than 100,000 times safer relative to smoking. So the impact of vaping on public health depends both on the relative risk for smokers who switch and the absolute risk for non-smokers who start.

Where is the vaping market going?

Nevertheless, the number of people who switch from cigarettes to e-cigarettes and the number of non-smokers who start vaping will be influenced less by the relative and absolute risks than by marketing. Until recently, e-cigarettes looked like they might be incredibly strong competitors with combustible cigarettes, driving combustible tobacco out of the market as effectively as email has replaced faxes. However, today that seems less likely. The key difference is that the major brands and marketers of e-cigarettes are now owned or financially controlled by tobacco companies.

The Single Best Health Policy in the World: Tobacco Taxes

For cigarette companies, e-cigarettes are a boon in several ways. The most obvious way would be if people who vape become addicted to nicotine and subsequently become smokers. In addition, the act of vaping in public may re-normalize social patterns associated with glamorizing cigarettes—that took decades to create and more decades to dampen. Also, the proliferation of products which are not cigarettes but almost—from pure nicotine delivery devices to heated tobacco—will make it extremely difficult to continue effective regulation and enforcement of tobacco controls (see Figure 1). 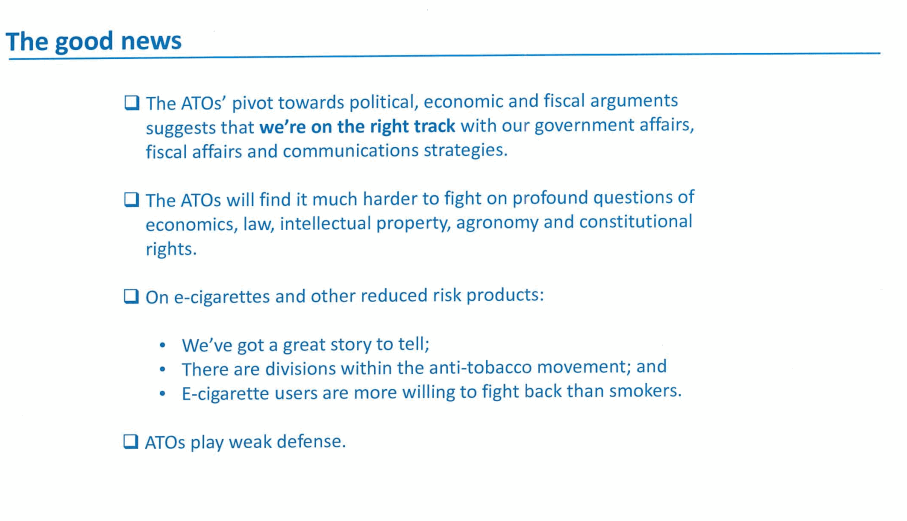 The future of the vaping product market is uncertain. However, unless something is done to stop and undo tobacco company domination, my crystal ball shows that in 10 years:

I don’t really have a crystal ball, but it does seem likely that decisions about marketing and product design are going to be strongly biased toward expanding the vaping market and undermining tobacco control policies. This natural profit-driven dynamic is going to be the strongest force shaping the e-cigarette market in the future. Promoting Tobacco-Free Portfolios and raising taxes on cigarettes and e-cigarettes are probably the most effective instruments for constraining these forces, but they will not be enough.

In the interest of public health we need market strategies that reduce the profitability of cigarettes. Without action to preserve competition between cigarette and e-cigarette companies, market forces and business behavior will lead e-cigarettes to ultimately cause more harm than good. With competition, e-cigarette companies would have an incentive to take market share from the sellers of combustible tobacco. Legislative and regulatory action—including anti-trust action—is required to make sure e-cigarettes compete against cigarettes, rather than complement them.

Publication
Are We Entering a New Age of Pandemics?
Charles Kenny