Many factors could be cited for the low ratios of financial inclusion in Latin America, but in a recent paper published at BBVA Research, that also came as a CGD working paper, we focus on the potential role of financial regulation. We assessed and compared the quality of the policies and regulations that impinge on financial inclusion in eight Latin American countries (Argentina, Brazil, Chile, Colombia, Mexico, Paraguay, Peru, and Uruguay). Peru and Mexico came out on top, with what appear to be the best regulatory frameworks for promoting financial inclusion. But even in these top performers, there is room for improvement.

In our recent study, we identified three dimensions of regulatory practices and policies that can influence financial inclusion:

To form each of the sub-indices, we assessed a number of variables selected on the basis of internationally accepted standards and a vast review of the existing literature. For each variable, we assigned scores in a range from 0 to 2 (where 2 represents the highest level of quality for the variable). For obvious reasons, it is not possible to go into the specifics of each variable and each sub-index here (the detailed explanation can be found in the study). However, there are two novelties about the construction of the sub-indices that are worth highlighting.

First, in constructing the sub-indices, we recognize that there may be interactions between variables that affect their whole impact on inclusion. Let’s take, for example, the sub-indices of simplified accounts or electronic money. Should regulatory constraints on fees and commissions charged by financial institutions to their customers for owing or using these products be assessed as detrimental or favorable for financial inclusion? The answer, as reflected in our index, is “it depends.” Setting no restrictions on fees and commissions to open and manage simplified or e-money accounts is desirable if the quality of competition policies for the financial sector is satisfactory. In other words, the recommendation to let financial institutions determine fees freely depends on the ability to prevent the emergence of monopoly powers through robust competition policies. In terms of our index, this means that to assess the quality of some Promoter components (simplified accounts and electronic money) we need to recognize their interaction with an Enabler component (competition policies).

A second interesting feature is that the index incorporates an interaction between some of the regulatory practices and other forms of government intervention that can increase the potential of those regulations. Continuing with the example of simplified accounts and electronic money, in the study we considered that the regulation governing the provision of these products is of a better quality if the government promotes their usage by individuals and small companies through additional efforts (such as depositing government transfers to low-income populations in these accounts) than if it stays aside. Finally, the amplifying effect of policies to enhance financial literacy on regulatory practices classified as Promoters is another example of the interactions between regulations and governmental interventions.

Which countries have the best regulatory framework for financial inclusion in Latin America?

The map below summarizes the results of our index of regulatory practices for financial inclusion in eight Latin American countries. The numbers represent the values of the overall index and of each of the three sub-indices (each ranging from 0 to 2, as mentioned above). 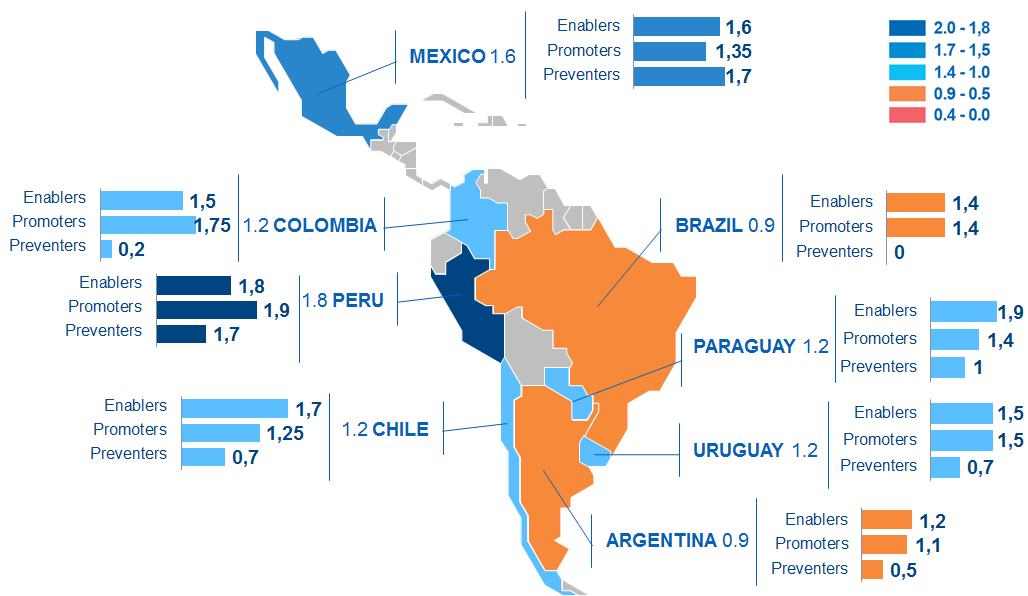 At the opposite end of the spectrum, Argentina and Brazil have the lowest scores. Both present very low scores along the Preventers dimension as there are various elements in their regulatory framework (from financial transaction taxes to directed lending by the state) that might run counter to financial inclusion objectives. Thus, in these countries major changes to the regulatory framework are needed to achieve sustainable progress in financial inclusion.

The rest of the countries obtain modest results that also tend to be explained by very low scores in the Preventers index but more solid results in the Enablers and Promoters indices. The case of Colombia stands out in this last group: although the country is strong in the Promoters index, the existence of a financial transaction tax, the imposition of ceilings on interest rates, and directed lending practices generate multiple distortions and explain why Colombia’s overall score lags behind Peru and Mexico.

The answer to this question is “no.” As discussed in the CGD report on Financial Regulations for Improving Financial Inclusion, regulation is important for two main reasons: first, because the right regulatory framework is key to enable the private sector to adapt innovations in digital finance and encourage their use by low-income populations, and second, because policies to increase financial inclusion must be compatible with the traditional objectives of financial regulators. Thus, they should not undermine the stability and integrity of the financial system, while ensuring effective consumer protection.

It should not be a surprise, though, that regulation is not the only factor that determines a country’s success in advancing inclusion. Many other factors matter, including socioeconomic constraints, the macroeconomic environment, institutional quality, and specific characteristics of the financial system. In other words, having an enabling regulatory framework is a necessary but not sufficient condition for sustainable progress in financial inclusion. This is the conclusion of an econometric study in Rojas-Suarez (2016) that shows that in Latin America, institutional factors matter most in explaining the financial inclusion gap.

That said, an appropriate regulatory framework is essential for financial inclusion. Thus, by signaling areas of strength and weakness in the regulatory practices of individual countries, the index of regulatory practices for financial inclusion is meant to support the efforts of policymakers in the region with a mandate to improve financial inclusion. Therefore, beyond the specific country scores, what is truly useful from this index is the opportunity it provides in motivating discussion among market participants, policymakers, and interested researchers, as it already has at the Latin American and Caribbean Economic Association meeting in Buenos Aires last November. Hopefully, these types of conversations will serve to guide regulatory reforms.

Liliana Rojas-Suarez is a senior fellow at the Center for Global Development.

Lucía Pacheco is an economist at BBVA Research. 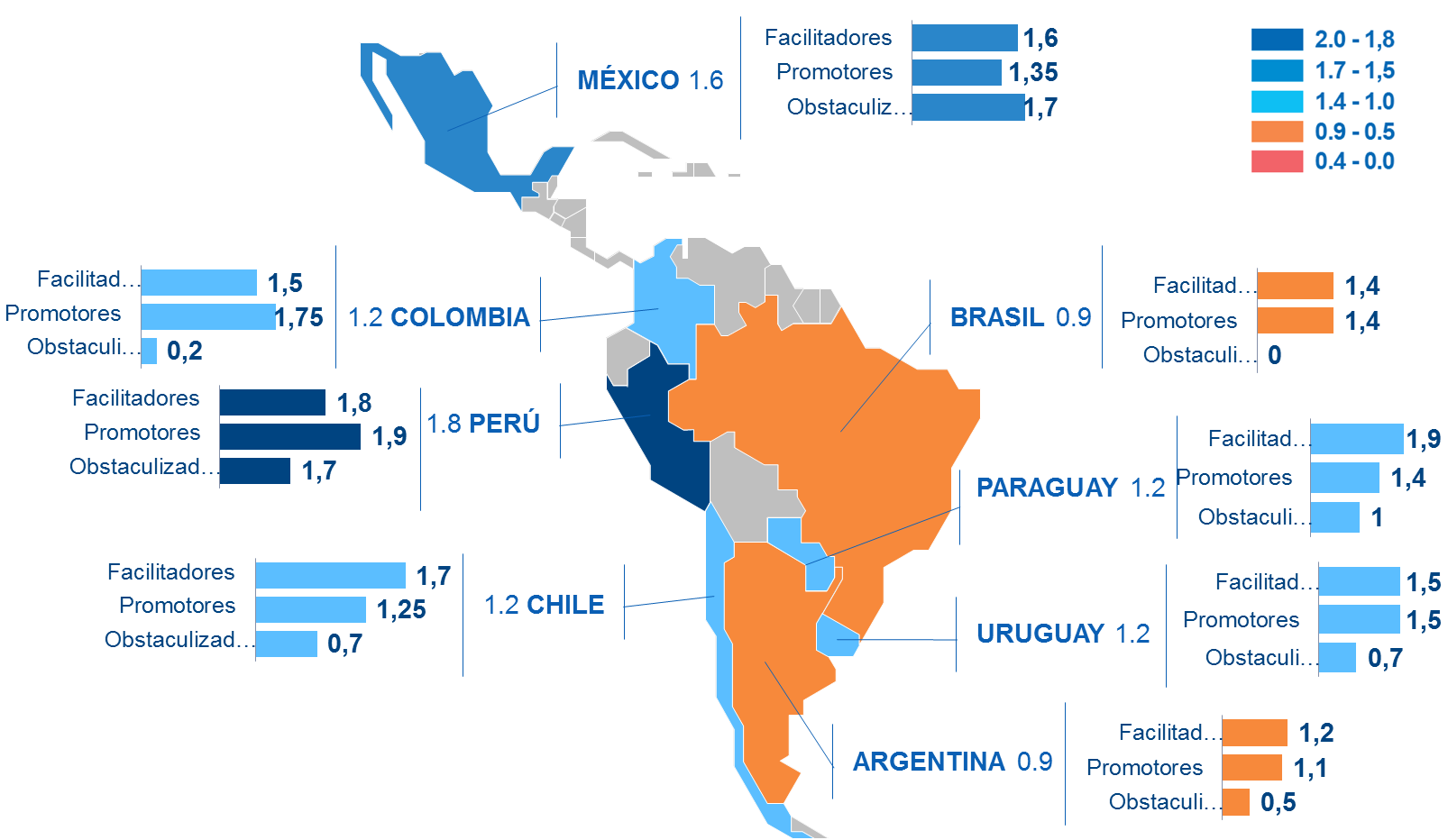 Blog Post
How Tough Is It to Be a Tech Entrepreneur in Nigeria?...
Vijaya Ramachandran and Junaid Sadiq Masood