Beyond Remittances: How Migrant Wages Help Communities Back Home | Center for Global Development | Ideas to Action Skip to main content

Beyond Remittances: How Migrant Wages Help Communities Back Home 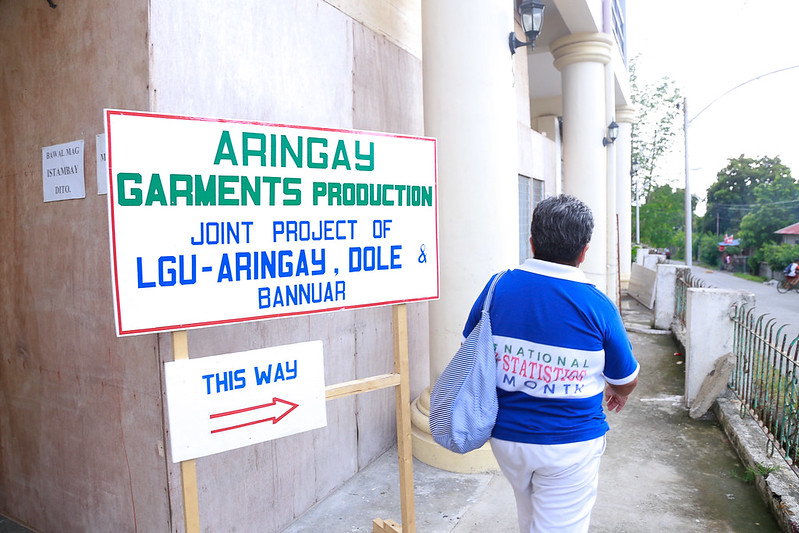 Each year, millions of people depart poor countries to work in rich ones, where their wages rise by multiples, as study after study has found. What is much less clear—and harder to study— is how that cash affects long-run economic development in the areas those migrants come from. Say we observe that areas from which many people migrate are relatively poor. That could happen because a lack of opportunities in poor areas cause people to migrate, and not because the smartest people emigrating cause the area to become poor. In a new paper, we take a closer look at this question by using a natural experiment in the Philippines to isolate and measure the effect of migrants’ income on the broader, sustained development of the areas they migrate from.

In theory, it is not hard to see how long-run economic development could arise through migration-fueled investment. Access to migrant income could allow households in origin areas to invest in education and household enterprises, leading to higher domestic incomes. This increase in education could, in turn, lead to an increase in emigration rates, and shift future migration towards higher paid overseas work. If so, an initial migrant income shock might have magnified effects in the long run.

But actually measuring such effects poses three challenges. First, it is rare to have individual-level data on international migrant incomes that one can compare with data on domestic income, to study the global income of origin areas. Second, we have to carefully consider how migrants and their families make decisions about whether and where to migrate, and how much to invest in things like education back home. Third, it is unusual to find a setting where a force majeure causes migrant incomes to change in a way that couldn’t, itself, be caused by the effects (like education) that we’re trying to measure. In this blog, we discuss how our paper does each of these.

We are particularly interested in how much of the long-run gains in income are due to increased educational investments, which affect international income (via future migration and occupation choice), as well as domestic income (by making workers more productive). Figure 1 describes the broad framework and mechanisms that could amplify initial shocks to migrant incomes.

Figure 1. The impact of increased migrant incomes in the long-run

To separate causation from mere correlation, our paper leveraged changes in migrant incomes driven by the 1997 Asian Financial Crisis exchange rate shocks. Some currencies suddenly appreciated relative to the Philippine peso, meaning that Filipino workers in those countries saw the real Philippine peso value of their wages jump almost overnight.

At the time, Filipino provinces were sending varied numbers of international migrants to different destination markets worldwide. These markets saw differing changes in their exchange rates (see figure 2). This meant that different migrant-origin provinces had different degrees of exposure to these sudden changes in migrants’ peso-value earnings. By comparing provinces with more migrants in Japan, to provinces with more migrants in South Korea, for example, we are able to isolate the pure effects of additional migrant income on households in those provinces. 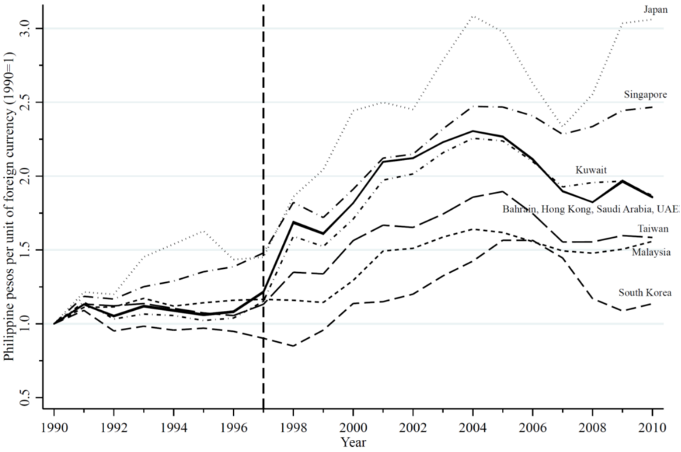 On the international side, our paper found positive effects on migrant income that continue to grow over time. After a decade, the positive effect on migrant incomes are substantially magnified compared to the size of the initial migrant income shock thanks to higher participation and improved performance in the international labor market. The initial shock leads to increases in new departures for overseas jobs, and increases in migration for higher-skilled overseas jobs in particular. We find large increases in average earnings per migrant, reflecting that these higher-skilled jobs have higher wages.

These increases in origin-areas' aggregate migrant earnings add up to long-run gains in income that are several times the size of the initial shock to migrant income. In other words, after some migrants invested in migration, higher returns on that investment allowed other families to invest in migration, with even higher returns—a multiplier effect that cumulates over time.

On the domestic side, the positive migrant income shocks also have large impacts on income that households earn from work within the Philippines. Most of this comes from entrepreneurial activities, suggesting increased investment in household enterprises. By contrast, there is no indication that any of the increase in household domestic income derives from higher earnings as wage workers for other employers.

Figure 3. Changes in global income per person in response to the 1997 Asian Financial Crisis 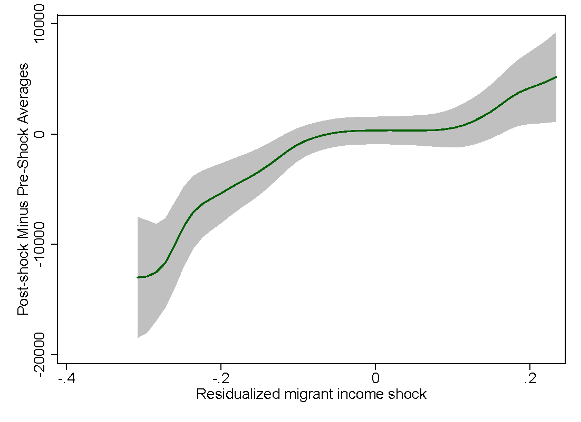 While the initial migrant income shocks led to increases in both migrant and domestic income, we find that most of this increase (75 percent) came from the latter—over the course of a decade, the domestic income gains actually come to dwarf the international income gains.

Figure 3 describes this change in global income (vertical axis) as a function of the initial migrant income shock in origin provinces (horizontal axis). These gains in global income are also reflected in key measures of household economic well-being. The increases in migrant incomes lead to higher household consumption and higher asset ownership in origin areas a decade later.

The real importance of education investments in amplifying the shock

All told, an improvement in migrant income in Philippine provinces caused long-run income gains in both the domestic economy and international migrant work. An important share of the global gains (24.4 percent of the increase in global income) can be attributed to educational investments.

In the Philippines, the jump in earnings when migrants depart is much more than just quick cash for them. It sets off a cascade of economic effects back home, rippling through migrant-origin areas for a decade or more.